More than a week after BBMP proposed Rs 8488 crores as the budget for 2010-11, the corporation on Thursday went a step ahead and announced an additional Rs 350 crores to the budget through revenue projections. 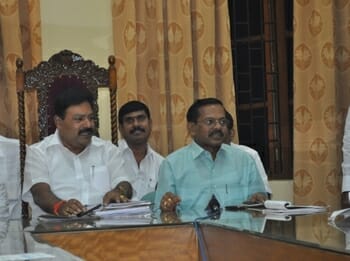 P N Sadashiva, Chairman of the Taxation and Finance Committee, also announced an increase in allocations to each ward, which is now a total of Rs 698 crores. This is after corporators voiced their concerns about not being granted enough funds for ward-level works. Each ward has now been been allocated grants in addition to the Rs 2 crores (old wards) and Rs 3 crores (new wards).

All figures are in Rs. crores.

In the four days of discussion in the BBMP council, several corporators raised concerns about the revenue projections of the corporation and even condemned the fact that huge amounts of bills were yet to be paid in addition to more loans being taken.

BBMP Commissioner H Siddaiah addressed the council on Thursday, responding to some of the issues brought up during the budget discussion.

"Keeping all of this in mind, we have made the budget. What can we cut down on now?", Siddaiah asked, to which Leader of the Opposition M Nagaraj (also corporator of Ward 23 – Nandini Layout), asked, "Who is responsible for those pending bills? What were the officials doing till now?"

Siddaiah did not respond.

Siddaiah however said that the challenge is to address all these issues and work around them. He cited the example of Section 108 (a) of the Karnataka Municipal Corporations (KMC) Act pertaining to payment of property tax, which says, "If default is made in payment…the person liable to the tax, shall pay a penalty at the rate of two per cent per month of the amount tax remaining unpaid after the period specified in sub section (1)." The Commissioner said the BBMP has not been collecting these fines from defaulters.

Congress and JD(S) corporators protested against the BBMP budget approval by walking out and staging a dharna, respectively. Pic: Vaishnavi Vittal.

Using Geographic Information Systems (GIS), Siddaiah says BBMP has recorded that only about 15 lakh properties come under their tax net. He said the BBMP will now have to get their act together in collecting tax to reach their projected revenue of Rs 1651 crores from property tax for 2010-11.

"We have started cutting down unnecessary costs. Accountability and transparency will be stepped up. We will do what is called as ‘tightening the belt’", said Siddaiah in his address to the council. He also echoed the BJP’s reason for taking huge amounts of loans in this budget, saying, "Loans are for development. There is no country in this world that has not taken loans. We should take this up as a challenge."

Mayor S K Nataraj also addressed the council, saying, "This is a people-friendly budget." He said Chief Minister B S Yeddyurappa will announce the state government’s grants to the BBMP in a forthcoming council meeting.

What’s up with the Agara and Iblur flyovers?

Traffic jams, construction material, barricades…the Agara-Iblur flyover project on the outer Ring Road, in south Bengaluru, is subject to all of these. We asked commuters, traffic experts, BDA officials and traffic policemen what they had to say about the project.

As the contestants left in the middle of other contestant’s speeches during the debate, the residents did not get a chance to interact with them.