It’s been a happening fortnight at the movies in Bangalore. The fourth Indo-German Film Festival ran between August 20th and 26th at Lavanya Theatre in Ulsoor, drawing a niche audience from across the city.

Next in line were a couple of much-awaited new releases at the cinemas over the weekend. Bollywood had the much awaited We Are Family. Following closely was a double treat from Sandalwood with Pancharangi and Kari Chirathe.

Yogaraj Bhat has often been credited with reviving the fortunes of commercial Kannada cinema. Following the hugely successful Mungaru Male, Gaalipata and Manasaare, initial audience responses at least indicate that Pancharangi seems all set to follow in the same vein.

The story line is not unusual and has been often repeated. A family are travelling to find a suitable bride for their eldest son Lucky (Pawan Kumar), who unknown to them is already in love with Soumya. Lucky is engaged to Latha (Priyanka), before his family even seeks his permission. Meanwhile his younger brother Bharath (Diganth) has fallen in love with Latha’s cousin Ambika (Nidhi Subbaiah). So in traditional Indian cinematic tradition, genuine love must find its way through this extremely complicated maze.

But what sets Pancharangi apart is Bhat’s ability to blend an unusual cocktail that has a very organic connection with its audience. Rural Karnataka, urban audiences, young, old, man, woman – as the western coast merges with modern production values, there is something in it for everyone.

The extreme simplicity of the plot is redeemed by witty dialogues, authentic characterisation, intelligent casting, strong performances and a patchwork of lilting cinematography. It is a celebration of cinema that has not lost touch with its cultural roots, while still creating mass appeal.

So I would go with a rating of 3 on 5 for Pancharangi – a film that proves that Kannada cinema just needs good films to have cinema halls ‘Housefull’ at 10 am on a Monday morning.

‘We are Family’ – not a completely wasted attempt

The most hyped of this week’s release has probably been Karan Johar’s We Are Family, Hindi cinema’s adaptation of the well-loved Susan Sarandon-Julia Roberts starrer Stepmom. The Hindi version, directed by debutante Sidharth Malhotra, has Kajol and Kareena Kapoor taking on the parts of Susan and Julia respectively. Johar backs the venture as producer and writer. 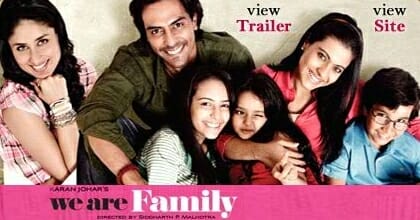 As in the Hollywood original, the Hindi adaptation is set in the world of disintegrating 21st century families. But the similarity ends there, as melodrama replaces the gentle wisdom and subtle humour of Stepmom. This is particularly disappointing as Johar’s considerable talent was involved in scripting the film.

Even as the director manages to hold his own in the first half of the film, the second half could have benefited from better editing. The film drags at places, concluding in what could best be described as a bizarre climax. In a film where children play an important role, Malhotra never completely finds his equilibrium between the adult and child actors. The child cast fail to completely find a place of their own like they have done in memorable Hindi cinematic experiences like Masoom or Hum Hain Rahi Pyar Ke.

Yet in spite of this, We Are Family needs to be commended for bringing contemporary urban themes into Hindi cinema. It’s one of those rare Hindi films that acknowledges that families are not always happy and mothers not completely perfect.

Following another hiatus from the silver screen after My Name is Khan, Kajol returns to give credibility to the role of Maya in the way that only she can. After memorable performances in Rock On and Rajneeti, Arjun Rampal shows once again how far he has come as an actor. Kareena Kapoor gives us a very believable and seductive Shreya. It’s also true that Malhotra’s first film is not a completely wasted attempt and shines at moments.

So I would go with a rating of 2.5 on 5 for We Are Family. Considering the kitsch that sometimes passes off for cinema, this film is a ‘one-time watch’ that you could catch along with your family.

But the carnival for Bangalore’s cinema lovers continues elsewhere. We can now look forward to weekend screenings from Chitravarsha, a yearlong event conceived by Chitrasamooha, a registered non profit trust. In September Chitravarsha enters its second quarter that will see the organisation screening another 13 award-winning Kannada films.

This weekend the organisation will be screening P R Ramadasa Naidu’s state award-winning film Moggina Jade. The film has been conceived in the background of growing urbanisation and the rise of the outsourcing industry, focusing on the plight of a little girl, enchanted by old ways of braiding her hair, but who is restricted from doing so in the name of modernity.

At another level, the film mirrors a girl child growing up in the present social milieu, while her parents are unable to understand her. The child’s angst is the focus of the film.

Watch this space for more updates!

In order to not lose the funding from JNNURM, Karnataka government passed community participation bill without any discussion. But it was a watered down bill, giving little power to citizens.

At home in Bangalore

Aditi De talks about Bangalore, being Bangalorean and the recently published anthology, Multiple City, a collection of writings on Bangalore, that she edited.