Over a period of four days, BBMP corporators were given an opportunity to debate and discuss the draft budget that was presented before the council on August 30th. While for the most part the Congress and JD(S) maintained that the budget is "bogus", BJP corporators hailed it to be "bombaat".

Unfortunately, what could have been a critical dissection and analysis of the proposed Rs 8488 crore budget, turned out to be, for the large part, like a regular monthly meeting, where ward woes were presented. 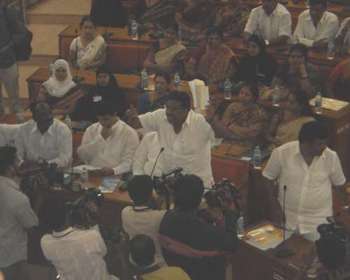 Leader of the Opposition M Nagaraj makes a point on August 30th when the BBMP budget was presented. Pic: Navya P K.

‘My ward’s name and number doesn’t figure anywhere in the budget’, was a common complaint. Congress and JD(S) corporators said the Rs 3 crores and Rs 2 crores allotted for the new and old wards respectively, was far from sufficient. Others complained about the persisting water problem, mosquito menace, garbage, sanitary lines, storm water drains and so on.

Congress’s M Nagaraj, Leader of the Opposition and corporator of Nandini Layout (Ward 43) spoke for four long hours on the first day of the discussion, terming the budget to be full of false claims.

His colleague, Uday Shankar, corporator of Siddapura (Ward 144) complimented the BJP for the design of the budget book "which looks like the cover of a magazine", but added that the content was a complete let down. He chided the party for using a photograph of Kempegowda on the cover of the budget book, saying the founder of the city would be completely disappointed to see the state of affairs in Bangalore today.

Shankar said there was no use in setting up dhobi ghats, building parking lots and shopping complexes, if nothing is done for the poor. "It’s a meaningless budget. You’ve thrown the KMC (Karnataka Municipal Corporations) Act out the door. I protest against this", he concluded.

A Congress corporator termed the BBMP budget as "New wine in an old bottle", with no one realising that the saying actually goes, ‘Old wine in a new bottle’!

JD(S)’s R Prakash, corporator of Kaveripura (Ward 103) requested Mayor S K Nataraj to double the grants for each ward. "I’ve told people that I will finish their work in the next six months. I can’t go back without enough grants", he said.

Congress’s Kavitha Raj, corporator of Singasandra (Ward 191), said the taxation and finance standing committee should have visited the 110 villages (that now come under BBMP) before preparing the budget.

But among the chorus about the ward woes, some pertinent issues also managed to find their way into this budget session. BJP’s Shanthakumari, corporator of Mudalapalya (Ward 127) in west Bangalore spoke about how bus shelters in the city are adorned with advertisements, but have absolutely no information about bus routes and timings that would help commuters. "If you keep looking at profits, who will help run the city?" she asked, pointedly.

Shanthakumari also stressed on protecting government property, especially civic amenity sites and fencing them to prevent encroachments. She also spoke about the garbage problem in the city, saying that Bangalore itself will become a huge landfill site like Mavallipura and Mandur, if the issue is not addressed soon.

About the budget’s proposed revenue projections through property tax, she said the BBMP should first resume issuing of khatas, because many residents in the city are unable to pay property tax without these title deeds.

Independent corporator of Shantala Nagar (Ward 111) Shivkumar K, said since his ward is a high revenue area, more grants will be required. "When there is no development, people do not want to pay tax", he said.

On one of the session days, this was the attendance of the council at the start of the day. Pic: Vaishnavi Vittal.

BJP’s S Harish, corporator of Nagapura (Ward 67) said the BBMP should not concentrate only on building parks, but also playgrounds. "Where will our children play otherwise?", he asked. Harish also suggested that in the proposed tree parks, citizens should be allowed to adopt trees, which will result in better maintenance. He also said that shops that sell exotic birds and animals, not under the purview of the Indian Wildlife Act, should be checked by the corporation.

Improvement of BBMP schools was also suggested by many corporators, cutting across party lines. Some said free books, sweaters and shoes should be given to all students and not just Scheduled Caste (SC) or Scheduled Tribe (ST) students. Another corporator said teachers in these schools should not be hired on a contract basis, as they are not paid properly and on time. Others suggested improvement of infrastructure in these schools.

BJP’s M Nagaraj, corporator of Gangenahalli (Ward 34) complained about lack of information with the BBMP. He said renumbering of houses should be taken up in each ward, using information from census and voter lists. He also said that information about each ward should be made available, as there is no ward-wise data on the number of parks, street lights, cemeteries, community halls and so on. Congress’s N K Gunashekar of Jayamahal (Ward 63) said the statistics department should be directed to take up this task.

Other suggestions from Nagaraj included installing Global Positioning System (GPS) trackers onto BBMP official vehicles to keep a check on them, and building a skywalk at Mekhri circle because of high traffic movement.

On the Saturday session, M Nagaraj of BJP, was snapped doodling on his desk. This was reported by several daily newspapers as well. However, on the Tuesday session, when it was his turn to speak, he was applauded for the several important points that he raised.

Taxing of private hospitals and schools, service apartments and paying guest accommodations were other suggestions by corporators, to increase BBMP revenue.

Across party lines, corporators felt that officials and contractors carrying out poor work must be suspended. They also felt that the BBMP should finish works on time and be held accountable on all counts.

"Give cars instead of bicycles!"

There were also some unusual requests made to the mayor through this budget session. Like Congress’s Avvai, corporator of Sudhama Nagar (Ward 118) who said there should be a dispensary within the BBMP headquarters’ premises, for corporators to use in case of emergencies. "Their blood pressure or sugar levels may shoot up while speaking at the session. They can use the dispensary then!", she said. The mayor pointed that a doctor was present at every council session, with a first aid kit, to attend to emergencies.

Congress’s Govindaraju, corporator of Jnanabharathi (Ward 129) complained to the mayor about the lack of drinking water in his ward. "Even if you don’t give budget in my ward, you give me water", he said, asking to otherwise give 5000 bicycles for residents in his ward to go and fetch water. He also felt that instead of giving bicycles for each ward, cars would be better, given the traffic conditions in the city!

Corporators spoke at length during the budget session. Sadly, not many focused on the budget and instead spoke about their ward issues. Pic: Vaishnavi Vittal.

JD(S)’s Padmavathi Srinivas, corporator of Shakti Ganapathy Nagar (Ward 74), said the mayor should have allotted more grants for wards with women corporators. "We sit quietly and listen when all of them argue, you should have given us more without us even asking!", she said.

BJP’s Y N Ashwath, corporator of Kempegowda ward, said the biggest lake in the city, the 300-acre Yelahanka lake fell under his ward, which should be improved. He asked for boating facilities and an international gym and swimming pool to be set up near here, saying, "If flights are delayed, passengers can come to the lake!"

BBMP’s budget after much delay

Responding to criticism about the budget being largely dependent on loans, BJP’s B V Ganesh, corporator of Chamarajpet (Ward 140) said they are being taken for development works. "We have always taken loans. You need to think positively about this", he said. Congress’s Munirathna Naidu, corporator of Yeshwanthpur (Ward 37) said there was nothing wrong in taking loans. "But look at the work that is being carried out in the city. Are you taking loans to do shoddy work?", he asked. Naidu has been indicted in the Lokayukta report on the June 2010 wall collapse incident on Bellary Road, which killed 17-year-old Sanjana.

Even as the Congress and JD(S) criticised the BBMP’s massive 2010-11 budget, many like BJP’s N Nagaraj felt the figures were not too steep. Nagaraj, corporator of Byrasandra (Ward 169) said the budget allocations would be sufficient since there are about six months left for the close of the financial year, when it will time for the next budget. He however requested the mayor to see to it that work is speedened up. "A single window system must be used to award tenders and finalise works. This should be done in under seven days", he said.

The mayor has announced that the budget session will resume at 3 pm on September 9th 2010, when he is expected to respond to questions and the budget is likely to be approved in the council. ⊕

Civic issues in Bengaluru: Easy to complain, but hard to resolve!

Many Bengalureans are familiar with BBMP’s Sahaaya complaint tool, but how do issues actually get resolved. How can software help BBMP function better?

The latest in the list of vanishing lakes is Harlukunte lake. The lake is under threat by encroachers. Meanwhile citizens of the area are trying hard to save the lake.

This week’s scan of Bangalore’s Kannada dailies includes reports on increasing prices of onion and government bungalow Anugruha falling from politicians’ grace due to Vastu Dosha.