Located in Kammanahalli in east Bengaluru, Jal Vayu Vihar or JVV is a residential colony of 540 houses spread over 22 acres. Built in 1990 by the Air Force Naval Housing Board, the apartments were meant for officers of the Indian Air Force and Navy, after they retire from service.

Air Force Naval Housing Board was established thereafter and they constructed the first such residential colony in Noida near Delhi.

In Bengaluru, JVV came into existence at a time when the concept of gated colonies was unheard of. The colony has over 100 clusters, with four to five apartments in each of them. Built in stone, the clusters give a very robust appearance of a medieval fortress.

With around 12 acres of built-up area, the colony has vast space for broad roads, walkways, jogging tracks, gymnasium, community hall, market area, children’s playground, a school and another playground with an amphitheatre. There are a number of shops for provisions, vegetables, fruits, laundry. There is also an ATM and post office.

Today a number of the original owners have moved out and civilians have bought apartments here. Approximately 25% of the residents are civilians, while the rest are from the armed forces. The day-to-day functioning and management is largely influenced by the military background of its residents. 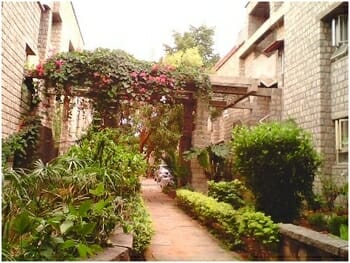 There are around 800 trees across the 22 acres of Jal Vayu Vihar in Kammanahalli. Pic: Captain M V Prabhakar

JVV is managed by a President and Board of Members elected by the residents and in accordance with the association bye laws. The residents pay monthly maintenance charges to the JVV Apartment Owners Association. The maintenance is done with a host of support staff including office assistants, plumbers, electricians, mason and gardeners.

The green and clean environs

As you walk through this residential colony, you will be treated to the purple, white, pink and yellow leaves of the bougainvillea that runs all around. This apart, there are at least 800 trees here and individual gardens, making it one of the most wooded and green colonies in the city. The greenery is also a haven for birds like parrots, myna, cuckoo and robins.

A dedicated band of conservancy staff work throughout the day to keep the premises clean. You will never find loose paper, stray plastic or even dry leaves on the road or in the open areas. The colony is litter-free and the residents willingly participate in maintaining cleanliness.

Garbage is collected at the doorstep and segregated in a common place, before loaded onto BBMP garbage vans. This has also helped in keeping away stray dogs. We are next looking to convert bio-waste into compost.

For all the dog owners in JVV, a doggi-do has been created for dogs to defecate. Regular fumigation keeps the mosquitoes away.

In any colony there are various types of residents. We have ours.

The Auditor – They are self appointed watchdogs who will never miss an opportunity to point out mistakes and irregularities.

The Know All – whose main duty is to recommend various improvements ranging from solar power to vertical parking.

Yes Man – who agrees with all and sundry

In case of any complaints, residents can post them on an internal website. There is also a register on the premises, where residents can write down their complaints. This ensures an efficient system for reporting defects, rectification and follow-up if required. All complaints are attended to within 24 hours and a completion report rendered. All essential services such as pumps, community centre and common area lighting have a back-up supply provided by a generator.

Water is also not much of a problem, with the main source being the BWSSB. The water tower, shaped like a missile, meets the bulk of the requirement and augmented by bore wells. We have also put in place a rainwater harvesting system and are now looking to take up recycling of water as well.

Some of the residents have also set up solar heating in their respective homes. The management is considering the use of solar energy for road and common area lighting.

JVV represents a great and peaceful community life. Festivals of all religions are celebrated with equal pomp and vigour. We also hold an annual day event, during which the entire colony is lit up and an exhibition is held.

All things said, over the years JVV has come to become a dignified, comfortable and secure colony to spend our retired lives. I understand that a Japanese delegation was brought to JVV many years back by a Karnataka State minister showcasing Bangalore. They left impressed and the minister asked "Why can’t whole of Bangalore be like JVV?" I also ask the same question. ⊕

About Mysore Venkatrao Prabhakar 4 Articles
The author has not yet added any personal or biographical info to her or his author profile.

A road where construction never ends, nor do traffic snarls

For years, residents of Banashankari, JP Nagar, and other areas along the Outer Ring Road, as well as commuters on the route, have been suffering due to ill-conceived and continuous construction. Isn’t there a better way to address mobility issues, wonders an anguished citizen.