What can be more soothing for a person, in the latter part of life, than to sit back and reminisce on bygone days? Some people are indeed lucky to be blessed with very special memories, and Ramadevi is one such person who has had the fortune of meeting literary stalwarts in her lifetime. Today, at 78, golden memories and thousands of books are her best companions. Her life is full of interesting happenings but she modestly dismisses them, saying that she has achieved nothing that deserves to be written about. 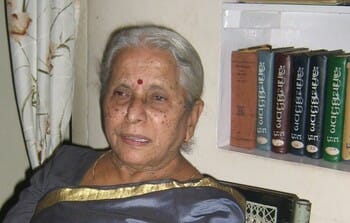 Writer Ramadevi at her residence (pic:author)

On entering her simple home, one finds piles of books and tens of trophies and awards all over the place, and little else. Books occupy even the clothes closet. She has a huge collection of nearly over 3000 titles of various languages from famous Kannada, English and Hindi authors. “I need to sort out my books and stack them in an orderly manner, which I am unable to do because of my age” says the thespian, “ these books are most precious to me, and I keep adding on to my library” she adds as she shows off her latest acquisitions.

Ramadevi started her career with the Government of Karnataka as a First Division Clerk in 1958 after a short stint as a high-school teacher at Shimoga and Arsikere. She did her M.A. (Psychology) from the University of Mysore and cracked the Rashtrabhasha-Visharadh exams too. During her service, she completed B.L. After 30 years of successful service she retired in 1988 as Deputy Secretary, Department of Education. She also served as Under Secretary in the Department of Kannada and Culture for five years during her service. She was the first woman to use Kannada as the official language and was honoured by the Government of Karnataka for the same.

Since her college days, Ramadevi was a voracious reader and passionate about writing too. Romancing thus with literature, she remained single. After retirement, she completed MA in Kannada from Mysore University and a diploma course in Journalism from Bharatiya Vidya Bhawan in order to sharpen her writing skills. Not wanting to limit her literary pursuit to Kannada alone, she pursued courses in French from Alliance Française and Bengali from the Central Institute of Regional Languages, enabling her to savour the rich literature of these languages.

Speaking of her literary career she says she started her writing career very late, though she contributed articles to magazines like Karmaveera, Bharati, Jeevana, Jaya Karnataka and Kannada Nudi, occasionally during her college days. Some of these were translations of Hindi articles. She could not pursue her passion seriously until after retirement, except for a few translation projects that she took up.

In 1980, Geetha Book House published her Kannada translation of the Hindi novel ‘Nayika’ of the famed Bengali writer Bimal Mitra. Another translation of Russian short stories for children which was published by IBH won her the Sahitya Academy Award in 1983. Ramadevi was also felicitated as ‘Makkala Bhavishyada Roovari’ at the Karnataka Makkala Sahitya Academy Sammelan held in Dharwar in 1985. All this encouraged her to take up writing seriously. She started penning poems and joined the International Poets’ Organisation headed by the famed Chaturbhasha poet Muddanna. Ramadevi published her first collection of poems ‘Hombelaku’ through Gorur Prathishtana in 2001.

Ramadevi has worked with literary organizations like the National book Trust and Central Sahitya Academy, and has written extensively for prominent publications like Prajavani, Janapada, Kasturi, Mallara and Karmaveera. Her Kannada poems and couplets have been published in various anthologies. She is also a very active member of Poets International, an association of international English poets. Her English poems have been published in their annual anthologies and in Biz Buzz and Samvedana publications too.

Reliving a golden past

The best achievement of her literary life, she says, is the task that she undertook for Dr Shivaram Karanth. “I once responded to a small ad in the newspaper in which Dr Karanth had called for people who can help him collect all his published articles, which were not available with him” she says, “and took up the challenge”. She launched a mammoth search in all possible places like the City Central Library, Dharwad University library , Kannada Sahitya Parishat, Gokhale Institute, B M Sri Prathishtana, etc and rummaged through many old issues of popular magazines and newspapers.

She was thrilled to locate nearly 450 articles of Dr Karanth in each one of them, and on varied subjects. “The correspondence that I had with him in this connection is invaluable” recalls Ramadevi. Dr. Karanth rewarded her by visiting her residence and felicitating her with a saree and gifting her copies of all the nine volumes of his published articles for which she was very instrumental. “I have all the works of Dr Shivaram Karanth in my library” she says proudly.

Ramadevi has also had the privilege of hosting Bimal Mitra, the Bengali writer, Gurnath Joshi, the renowned translator, Shakuntala Sirothia, the Hindi writer and Dr. Anupama Niranjan, the Kannada writer, at her humble home. All the correspondence in connection with her work with these stalwarts has been preserved by Ramadevi. Some of the letters of Dr. Karanth have been published in the book ‘Patra Vyavahara Mattu Naanu’.

Today, it is difficult for her to go around the city because of the traffic and her age, but she does attend literary meets that happen near her residence in J.P.Nagar. Ramadevi is a life member of the Gokhale Institute, B.M.Sri Prathishtana, Kannada Sahitya Parishat, Lekhakiyara Sangha, Attimabbe Prathishtana, Aithihaasika Academy and Vignana Parishat. As she is not computer savvy, she has to do all her writing manually and thus can’t do as much as she wishes to. Right now she has three manuscripts including the Kannada translation of Bimal Mitra’s ‘Muzrim Haazir Hai’ waiting for willing publishers.

Ramadevi’s indefatigable spirit deserves appreciation and encouragement. This modest achiever, for whom nothing was a barrier to realising her dreams, is truly an inspiration to young writers to develop and nurture their passion, and triumph against all odds. ⊕

If you’re fretting about how to engage your kids during these year-end hols, don’t. Here’s a checklist of interesting things to do- mild, wild, fun and adventurous!

What road size will ever be enough?

A new book on German architect Otto Koenigsberger, traces his contribution to Bengaluru. Read an excerpt from the book describing his work on the KR Pavilion, City Bus Terminus and Municipal Swimming Pool.