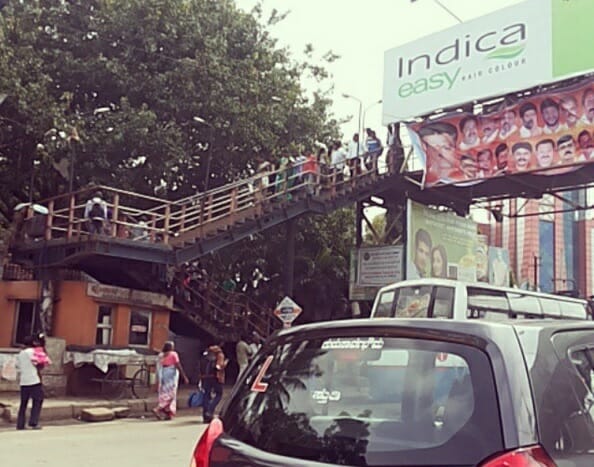 The BDA tender makes it mandatory to leave some space to make the skywalk path visible from beneath the road. Pic: Shree D N

The Bangalore Development Authority (BDA) wants to improve pedestrian experience on Outer Ring Road by building 25 skywalks. However, the plan has hit a deadlock, after there were no bids or expressions of interest put up by anyone for the tender to construct 23 of these.

Jayashankar Reddy, Executive engineer, BDA, told Citizen Matters that no applications were made for the tenders the BDA had called for, to construct pedestrian these pedestrian skywalks. The BDA plans to call for tenders again, after revising the tender to relax some conditions to make it more attractive to the investors, said Reddy.

P N Nayak, Engineer Member, BDA, confirmed that 23 of the 25 skywalks received no bids, while the two that did—at Kammanahalli and Babusabpalya— are presently under construction.

Early this year, in the month of January, the BDA had called for tenders to construct pedestrian skywalks, complete with escalators, at the following 25 locations:

BDA had quoted Rs 99,20,000/- as the minimum amount the party undertaking the project has to pay over the span of twenty years to the BDA. The bidder quoting the highest price over this minimum, after meeting the eligibility criteria and making a proposal satisfactory to BDA, was to be awarded the contract.

Apart from paying this sum to BDA, the successful bidder was also expected to bear the expenses involved in construction of the structure and its maintenance for the next twenty years.

In return, the successful bidder will be granted advertising rights on the skywalk. At the end of the first twenty years, the skywalk, along with all the responsibilities and rights—including those on advertisements—will be transferred to the BDA free of any charge and free from all encumbrances.

The total expenditure on the project borne by the successful bidder over these twenty years deducted from the total revenue generated by advertising on the skywalk was to be the profit made out of the venture.

However, there have been no interested parties in the venture. Hence the BDA is planning to call for tenders yet again, after considering making concessions or relaxation of conditions that might attract bidders.

The project was in fact announced in the last state budget tabled in February 2015, as a public-private partnership project. Reddy informed Citizen Matters that no money has been allocated for this project.

These are the 54 skywalks coming up in Bengaluru
Can skywalks be made convenient and safe?
Sarjapur Road: No entry for pedestrians!
It’s all dust, smoke and bad roads for pedestrians, while flyover takes shape

How we started segregating our waste

A sea of plastic bags were sitting around, while all our children were playing in the driveway. An accidental wrong hit and and they would be scrambling amongst the garbage looking for their ball . Something had to be done. And fast.