A few days ago I was at a junction where the traffic signal wasn’t working and cops were not to be seen. All hell had broken loose and there were vehicles turning in every direction, as a result of which no one was moving.

Tempers were rising and honking crossing all known limits of sound pollution. I was right at the front and seeing the mayhem ahead I tried to stay put, in order to not add to the utter confusion ahead of me. A few sensible drivers stood by too. 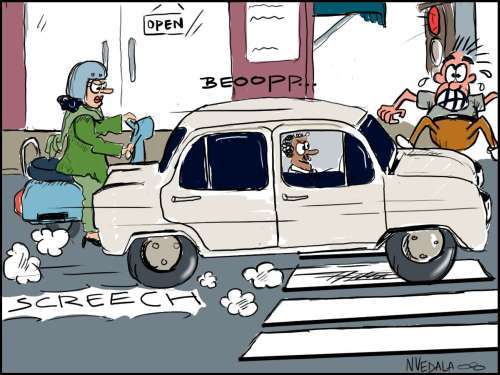 But as usual there was one impatient driver who honked and yelled. He was asking me to move ahead. I moved aside and asked him to go forward. He went ahead, loudly wondering how I had managed to get my driving license. Not very surprisingly he didn’t get too far ahead. And there it was – for full five minutes four vehicles facing each other, honking and not knowing which way to go!

What makes people drive like there is no tomorrow? Are these remnants of evolution we have supposedly grown beyond? Yes, evolution. Remember evolution? Remember how men had to go out and hunt for food and for survival? And once they had figured out a civilised way of life, hunting became a sport, an adventure. But as we evolved further, there were less and less opportunities for blood sport; certainly so for the common man.

The inventive men found newer ways of seeking such pleasure. And I do believe driving is one of them. However, not everyone can afford Formula 1 racing.

But they discovered that breaking rules that they themselves had made up in the first place, gave them pretty much the same high, that too within acceptable social, if not legal norms. In comes city driving. Skip lanes, honk at hapless small vehicles stuck in the legal speed limit range, make pedestrians beat Usain Bolt’s record in order to save their own lives and when there is no one looking, even skip a red light. All in a day’s work.

No wonder women are considered are bad drivers. They stick to rules. Wait for the traffic light to turn green, think twice before honking at a pedestrian and they absolutely refuse to get down give a good show when they accidentally ram in to someone’s vehicle. Instead they apologise and show remorse. Where is the fun in all that?

Aftermath of the Rs.1 Volvo

BMTC allowed its ‘cool’ buses to go on overload last week and paid
the price.

Musings of a Bangalorean on a rainy evening…

A common man in the city feels quite ‘uncommon’ when he has to trek through the broken, traffic-infested city roads to reach his workplace, off-roading or coming to terms with misinterpreted signals and callously confident drivers.

Transport Minister R Ashoka said this in response to being pressed on his party’s position on ABIDE’s proposal to have local areas within wards elect citizens into a ward committee chaired by the elected councilor.