More than 500 senior citizens (aged 60 and above) took part in a ‘dignified and silent protest’ at Cubbon Park on August 16th 2010. This was a part of a nationwide protest, organized by the Joint Action Committee of Senior Citizens, and held with the intention of communicating to all governing bodies (at local and national levels) that most rights of senior citizens as mentioned in the constitution were not being safeguarded.

In Bangalore, under the aegis of Federation of Senior Citizen Forums of Karnataka, this silent protest at Cubbon Park’s Band Stand, was held between 10:30 and 11:30 am, where senior citizens and others held placards and banners. These people were representing various senior citizen organisations/ forums from areas such as Kengeri, Vijayanagar, Mathikere, Nagarbhavi, Indiranagar, Malleshwaram and other localities. Members from organisations such as Jnanajyothi – senior citizens forum of Banashankari II Stage, Nightingale, Dignity Foundation, CBR Network, Karnataka Pensioners Association, and Help Age India were also present.

The protest marked the lack of effective implementation of the following

The common sentiment running through those present was that it was the responsibility of the government (both central and state) to implement the above and provide financial security, healthcare benefits and shelter to senior citizens across the nation.

According to some statistics shared by those present:

The protest was aimed at seeking the following

In addition to the protest, many senior citizens across the country are partaking in a post card campaign wherein post cards (letters and emails too), with their demands mentioned in them, are being sent to likes of Chief Ministers, local MLAs & MPs, the Prime Minister and others in responsible positions including Opposition Leaders of both Lok Sabha and Rajya Sabha. 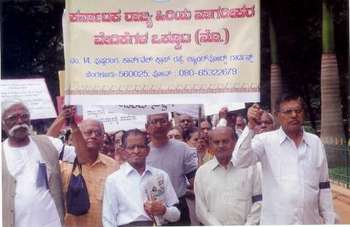 M R Rangaswamy, President, Jnanajyothi – Senior Citizens Association of Banashankari II Stage, and one of the Karnataka conveners of the protest, said, "With the drastic breakup in joint families, seniors no longer have the support system they had earlier. It is as such the duty of not just individuals but also NGOs and the society in general, and the government in particular, to take care of the welfare of seniors and protect them from financial/other exploitation and abuse, and provide them with adequate health benefits. Seniors are the roots of any country. They need to be taken care of in their final years."

The peaceful protest concluded with the seniors hoping that their voice is heard by those who can make a difference. ⊕

How a Sarjapura Road layout became free of water troubles

The story of water management in Rainbow Drive, Sarjapur Road has a lot of lessons for many layouts and neighborhoods trying to find a way out of water problems.

Thanks to industrialist Walchand Hirachand’s initiatives in the 40s in Bangalore, India is one of the foremost in the maintenance and development of military aircrafts today.