Forget the common man, not even the judiciary finds it easy to sway the state’s government officials from perpetual indifference. At a Lok Adalat hearing on August 6th 2010, many top officials were pulled up by the judges for poor performance and lack of initiative. However, the babus wouldn’t be swayed. After the session, many were seen joking about the whole affair.

Around 120 people including senior government officials and their subordinates, lawyers, members of non-governmental organisations and civil society groups were present at the hearing, held at the High Court.

Among the first to face the wrath of the Lok Adalat was State Environment Secretary Kanwar Pal who was censured by the judges for not producing a satisfactory report on the 7000 industries in Bengaluru that are violating the Water (Prevention and Pollution Control) Act. Pal was supposed to direct the Karnataka State Pollution Control Board (KSPCB) to produce the report regarding the offending industries and the action taken against each of them.

"Industries in Bangalore release about 10-15 MLD (Million Litres a Day) of effluents. About 7000 industries were found to be non-compliant with the Water Act. Fifty-eight per cent of ground water in the city is contaminated," Pal said at the hearing. The judges said that the report submitted was not satisfactory and this amounted to contempt of court. 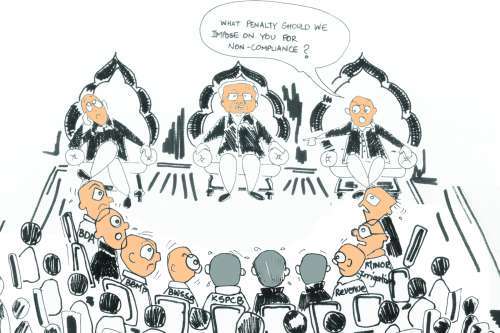 "What penalty should we impose on you for non-compliance?" Judge N K Patil asked. It was a full ten minutes before the environment secretary was let off. He was asked to submit the report at the next hearing on October 23. The judge also asked Pal to direct the KSPCB (Karnataka State Pollution Control Board) to submit a report on the status of all lakes in the state during the next hearing.

The condition of other departments was no better. Revenue and Minor Irrigation departments were also criticised for non-compliance. "There is no communication between different departments," Judge Patil observed. Several department heads got earfuls from Justice Patil and Member of Lok Adalat A N Yellappa Reddy (a city-based environmentalist), for not initiating appropriate action as was directed in the previous hearings.

Lok Adalat or ‘People’s court’ is an alternative to regular courts, wherein disputes are settled fast and free of cost through conciliation and compromise. Many cases of money claims, partition suits, damages and matrimonial cases are routinely settled before Lok Adalat.

Now, this Lok Adalat on waste management was originally constituted to implement the directives of an order made by the High Court in 2002 in a case relating to the pollution of Bellandur tank. The Adalat directed all concerned government departments including BBMP, BDA, BWSSB, Minor Irrigation Department, KSPCB and Revenue Department, to form a committee. The heads of each of these bodies are required to be present at the hearings. The scope of cases was gradually increased to include other environmental issues such as hospital waste management, solid waste management, rejuvenation of lakes and so on. The Adalat is usually held once a month, but this can vary depending on the amount of time government officials request to implement court orders before the next hearing.

In the last few years of this Adalat under Justice H L Manjunath (who started Lok Adalat), several changes were initiated such as provision of clean drinking water to Bellandur residents, getting hospitals to set up ETPs (Effluent Treatment Plants) and provision of water to government hospitals at domestic rates instead of commercial rates.

"The court has been able to implement many changes despite lame excuses from government departments. Officials can even be jailed for violating court orders. They have to be pushed into action," says Advocate S Vasudev, who had represented Bellandur village panchayat in the case. However, no action has been taken against any official yet. "On getting warnings, officials usually comply or they give reasons for the delay in taking action," says Vasudev.

Apart from ensuring that court orders pertaining to the city’s environment are implemented, the Adalat also discusses issues as was seen at this month’s hearing. One such was on solid waste management, ideas on which were proposed by the Solid Waste Management Round Table Bengaluru, a group comprising citizens and two NGOs – Saahas based in Jayanagar, and Full Circle which works in North Bangalore.   This was the first hearing of the Round Table, which was formed about a year ago, to identify solutions to the solid waste management problems of the city. Members of the Round Table made a presentation ‘Roadmap towards zero waste’ detailing the benefits of segregating solid waste at source.

"Of the total waste, 60 % can be turned into compost, 30% can be recycled, 5% can be disposed strategically and only the remaining 5% needs to go into the landfill. Sixty to seventy per cent of the waste can be managed at the household level," said Shalini Charles Khanna, a member of the Round Table. The organisation currently works with 10,000 houses and institutions, where it segregates more than six tonnes of waste and earns money by selling materials to recyclers.

The members suggested that dry waste collection centers be opened in every ward and biogas units be opened for processing wet waste. "Instead of the Rs 100 crores that BBMP spends now annually, our calculations show that with our proposal the Palike can earn Rs 80 crore instead, by recycling and composting waste, while making the city a zero-waste zone," Shanthi said.

Mayor S K Nataraj, who was present at the hearing, said that the proposal will be considered. "We will work with the Round Table regarding this proposal," he said.

Following this, BBMP made a powerpoint presentation with respect to landfills, which was later criticized by the judges for its lack of clarity. The presentation was shoddy and that it should have been done in a way that everyone present in the courtroom understood it, the judges observed. The BBMP presentation included information on how they are segregating waste currently, the companies to which the work has been outsourced, their plans to introduce more landfill sites and so on. A member who attended this session remarked that the information presented was with data of 2008.

The mayor, however, defended his subordinates saying that the officers were probably scared as they were being exposed to the Lok Adalat for the first time. "Yesterday they did a good job when they made the presentation to me. Anyway what finally matters is the result," the mayor said.

BWSSB Chairman P B Ramamurthy, who was also present at the meeting, said Sewage Treatment Plants (STPs) will be installed at the upstream of polluted lakes. "We are planning to construct 11 STPs in the periphery of the city as well. This will be completed in 2012, when the project to supply an additional 500 MLD of Cauvery water to the city is finished," he said.

BBMP Commissioner H Siddaiah said that the process of fencing and developing lakes in the city is progressing. A total Rs1000 crore is needed for the process, of which Rs 200 crore has been allocated this year. The programme will be completed in three years, he said.

After the session, the Round Table members were seen interacting with the mayor. He said that women councilors in the BBMP were the key to implementing the idea of waste management.  "We are lucky to have 86 women councilors this time. They will take to this concept fast and once they are on our side, others will fall in line," the mayor told them.

The members also asked the mayor to make the BBMP office a zero-waste area first. "We got a tentative commitment from the Mayor in this regard. If government departments have to implement this idea, they have to follow it themselves first. It will also help them understand the effectiveness of the idea," Sandhya Narayanan, a member of the round table said later. Around seven to eight people from the Round Table attended the hearing.

For the officials, however, the hearing seemed to be just a routine affair. After the two-and-half-hour session, the sleepy backbenchers drifted out while the top officials stopped for a quick chat – it seemed like business as usual until the next hearing.

Outside the court, a relieved mayor was heard commenting, "Solid waste, storm water drains, dog menace – thank god there is no rat menace!"

It’s a simple question: why aren’t bus stops in Bangalore shifted away from intersections? The answer isn’t as simple. It’s messy city, and so you have a messy answer.

From banning domestic workers to forcing additional quarantine on residents, many RWAs have made their own rules. The legality of these rules is highly questionable, but BBMP Commissioner says he won’t interfere.

Water, waste, infrastructure – all the news from last week you must know about Bengaluru, in one place!