At a recent meet to discuss the loss of heritage in Whitefield to road-widening , residents of the locality spoke out against the BBMP’s plans. About a hundred people attended the meeting which was organised on August 5th by the Bangalore Chapter of the Indian National Trust for Art and Cultural Heritage (INTACH) in association with residents of Whitefield. 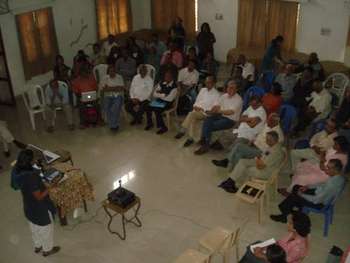 About 100 citizens attended the public meeting in Whitefield to frame plans to protect the area’s heritage. Pic courtesy: INTACH

The meeting began with a short presentation about the history of Whitefield by conservation architect and INTACH member Krupa Rajangam. She spoke briefly about the origins and growth of the settlement, which was established in the 1880s by D S White, who intended it to become a self-sufficient Anglo-Indian village. Krupa  highlighted how Whitefield is unique as such an experiment was never tried before nor after.

The floor was then thrown open to participants who spoke on the issue with a sense of urgency, passion, and even despair. There was also plenty of resolve on display. Though varied opinions emerged, the group was near-unanimous that heritage must be safeguarded. Glen Lunel, who has lived in Whitefield for 36 years, spoke for most people when he declared, "Heritage is a part of my life. I live by heritage".

Several common themes emerged from the discussions. The first was the need for continued united resistance against unwanted and unplanned developments. Whitefield resident R K Misra, member of the Chief Minister’s Agenda for Bengaluru Infrastructure Development (ABIDe) task force, made his oppostion against road-widening clear.

Misra said, "If we, citizens of Whitefield, are happy with our roads and our (traffic) jams, why are you (BBMP) widening the road?"

T R Raghunandan, former secretary of the state rural development department, highlighted the importance of active civic participation to "keep the pressure on" since, he said, Karnataka is one of the few states with no institutional mechanism provided by law for people’s participation in governance. 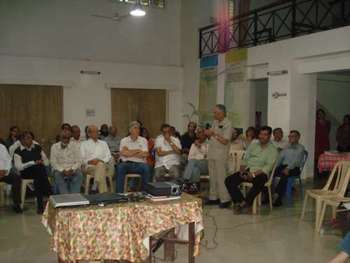 A citizen making a point at the consultation. Pic courtesy: INTACH

A second recurring theme was the need for awareness about heritage. Several people spoke about how Whitefield’s unique history should be made known to more people. Architect Jaffar Khan, a visitor from Vellore, spoke about his experience in documenting and highlighting Vellore’s heritage so that people could learn to love their city. As he put it, "It’s like knowing your grandfather." Misra concurred and suggested signs, maps and trail markers as some ways to go about this.

A related theme was the need to document heritage. INTACH Chairperson, Major General L K Gupta, urged Whitefield residents and other Bangaloreans to help in any way they could to prepare an inventory of the city’s heritage. He also called for a change in mindset so that heritage and development need not be seen as mutually exclusive but to realise that "development and heritage can go together."

The issue of road-widening elicited some heated remarks. Some residents were mystified about the need for widening a road which rarely had any traffic jams. Others opined that just enforcing traffic and parking rules ("Don’t park on the road," thundered one participant) would show how our roads are actually underutilised.

Several practical alternatives for traffic management came from Paul Trouilloud, a conservation architect and town planner who works with the French government. Trouilloid shared how planners in Paris had realized as early as in the 1970s that wider roads only led to greater traffic. "There is no one big solution to traffic management," he said, adding, "There are only a series of small solutions." 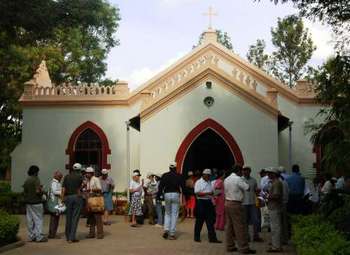 The Whitefield Memorial Church, which has been marked as property to be acquired for road widening. File photo.

French planners instead discourage traffic by reducing road width and parking space, Trouilloud said. At the same time, the city tries to provide public transport that is as cheap, comfortable and fast as travel by car. Some measures they have adopted include a dedicated lane for buses and taxis, no road-widening in city centres, bicycle and car rentals and so on.

Many Whitefield residents also spoke about how a little enforcement of parking rules alone could do away with any need for road-widening.

At the end of the meeting, the participants decided to put together a small group comprising INTACH, the newly-formed Save Whitefield group, and technical experts who will work towards a heritage management plan for Whitefield. This plan will be aimed to address this historic settlement’s infrastructure needs without affecting its heritage.

What has Hebbal MLA been up to in the last five years?

Hebbal saw two MLAs in last term – both from BJP. After the death of Jagadish Kumar in 2015, the next bypoll saw Narayana Swamy win the seat.

The #MahadevapuraDemands protest against elected representatives last Friday seems to have had some positive impact. But residents of the constituency are not yet ready to celebrate.