The Karnataka State Pollution Control Board (KSPCB) is set to take on the Bangalore Water Supply and Sewerage Board (BWSSB) on yet another case of lake pollution. The severe pollution of the DRDO lake near Bagmane Tech Park in CV Raman Nagar came to the notice of KSPCB officials during one of their routine inspections.

One part of the lake seems close to perfect – a look at the lush greenery, the clear blue sky, and the ripples that disturb the calm waters when a bird fancies a swim occasionally, can make your day. Meanwhile, the other part of the lake, segregated by a bund, is rotting with sewage accumulated over months.

On receiving a complaint from Col. Thimmayya of DRDO (Defence Research Development Organization), who is in charge of maintaining the lake as well, a sample was collected from the lake and sent to the KSPCB’s Central Laboratory for testing. After 15 days, the report is available now and it has been confirmed that BWSSB’s sewage is polluting the lake. KSPCB will hold a hearing with the BWSSB, but a date for the hearing has not been fixed yet. As per procedure, BWSSB will be given time to take measures and if they don’t comply, the Board plans to file a criminal case against them. 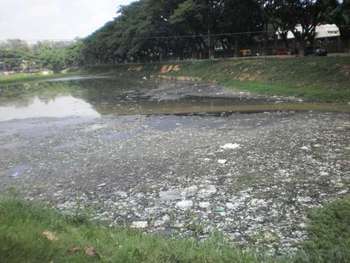 The board has already filed two cases against the BWSSB for letting untreated sewage into water bodies. One of the cases is being heard at the Judicial Magistrate First Class (JMFC) court in Mayo Hall at the city centre. There are also several cases against apartment owners and 10 against CMC and TMC.

Complaint filing in a mess

Currently complaints can be given to the KSPCB Head Office in writing, orally, through e-mails, SMS or IVRS. The IVRS number is 25589111, and the contact number for sending SMS is 9483518899.

Citizen Matters ran into these developments while following up on a reader complaint about pollution at the same lake. The reader is a software engineer working in Bagmane Tech Park. In the process we looked into how KSPCB’s complaint system works and it turned to be a messy system which even the watchdog’s own officials do not understand fully or cannot explain.

Currently, filing complaints with the board is complicated. According to officials, of all the complaints the board receives, nearly 50 per cent have to be re-directed to other departments. The reason is that the various Acts – Water Act, Air Act, Environment Protection Act, Hazardous Waste Act, Municipal Solid Waste Act etc – that the KSPCB functions under, also comes under the purview of other bodies like BBMP and BWSSB.

S Venkat Shekhar, Environmental Officer at KSPCB, says, "Often the public is not aware of whom to go to, for filing complaints. We get many complaints that actually come under the purview of the BBMP, BDA or even the Transport Department. Sometimes we ourselves re-direct the complaint to other departments, but most of the time we just advice the complainants to contact the concerned department." Because of the overlap of jurisdiction, no clear guidelines have been set on accepting complaints, and complaints are considered on a case-by-case basis.

Nanda Kumar S, Senior Environmental Officer and in-charge of complaints section, says that citizens are welcome to file any complaint with the board. "KSPCB is only a regulatory body to ensure that industries and government bodies meet our standards. We may not be responsible for taking action, but we will look into any case of pollution," he says.

Currently complaints can be given to the KSPCB Head Office in writing, orally, through e-mails, SMS or IVRS. The IVRS number is 25589111, and the contact number for sending SMS is 9483518899.

The SMS Complaint service, which started in May, has received only about 20 complaints so far, most of which are from Bangalore. Complaints can also be given directly to the Regional Offices. Complaints are filed by the Board itself if issues are identified during its routine inspections. In addition to these, media reports are also sometimes treated as complaints. On an average, KSPCB Head Office receives around 30 cases every week from all over the state.

What complaints are received?

Of the complaints received from public, majority is regarding noise pollution. There are many cases of mobile towers causing noise pollution because of diesel generators. "We give clearance to these towers only if they meet acoustic standards. Still there will be a low humming sound, which can be disturbing to residences nearby. If there are complaints regarding the continuous humming, we will ask the tower to be shifted elsewhere," says Nanda Kumar.

There are also many cases regarding air pollution, sewage, solid waste, ground and surface water pollution, and industry specific complaints. Rarely, there are also cases of false complaints given to settle scores with neighbors or family members, which are usually sent anonymously, say officials.

Common complaints the KSPCB receives that do not come under their purview are on municipal waste, plastic pollutants, loud speakers, vehicular pollution, waste disposal systems and specific complaints against particular residents. Nanda Kumar says, "Collecting, handling and disposal of garbage is the responsibility of BBMP while KSPCB monitors the location where BBMP disposes the waste and the technology it uses. In the case of plastic pollutants, KSPCB has control over the manufacturing systems only."

While cases of loud speakers and vehicular pollution have to be complained to the police and the transport departments respectively, specific complaints about pollution caused by a resident in an area is to be reported to the BBMP. Complaints regarding waste disposal systems should be given to the BBMP or BWSSB.

KSPCB receives nearly 30 complaints from all over the state every week.
Pic: Navya P K

Any complaint that the KSPCB accepts is forwarded to the responsible Regional Officer (RO). Complaints are taken up on the basis of priority. Serious cases are considered immediately, but any case will be attended to within a fortnight. The RO or his team inspects the area and contacts the complainant and the accused. In cases of air and water pollution, samples will have to be collected and tested at the Central Laboratory, which in itself will take around 20 days. Hence it takes at least a month for the RO to send his report in these cases.

If the RO has the authority to take action in a particular case, he sends a report to the Member Secretary at the Head Office after taking action. If the case is serious or affects the Board’s policy, the RO will first send the report to the Member Secretary, who will decide on further action. In serious cases, hearings will be conducted with the complainant and the accused as well. If the complaint is against an industry which is a habitual offender, the RO has the power to revoke the environmental clearance of the company or even close it down without prior consent of the Board.

But usually the company will be served a show cause notice and hearings will be held. If there is no initiative from the company to solve the problem, KSPCB has the authority to cut off the power and water supply to the company. Even though the board has the power to seize the company, this is done only in rare cases. If the company proposes solutions to the problem and takes initiatives according to the Board’s directives, it will be allowed to function normally again. The Board guides them on solving the issue and extends the notice period depending on whether the company continues to comply with the board’s directions. It is a regular process for an industry to be closed down temporarily and then allowed to function on compliance of rules.

Citizen Matters has asked for the names of industries against whom closure orders were recently issued or cases were filed. At the time of publishing this article, KSPBC officials preferred to transfer the responsibility of disclosing the details to each other (between offices) and in effect declined to respond.

The board can also file criminal cases against offenders. However, this is only seen as a last resort as it takes a long time for the verdict to come. "For a single case an officer will have to attend several hearings in a year, which is not feasible due to issues of staff shortage," said a KSPCB official who did not wish to be named. Cases are filed against other government bodies like BWSSB as it is not possible to interrupt the functioning of these organizations.

Eleven ROs in the city conduct routine inspections in high-risk areas. Industrial areas especially are divided into three categories – red, orange and green depending on the severity of the pollution. "Inspections have to be held routinely, but there has been some lagging now due to shortage of personnel," says Nanda Kumar.

PNLIT members are making cloth bags that will not only help reduce plastic but also provide livelihood to local women.

If BBMP says no, what can apartments do?

With BBMP vacillating on their policy for collecting garbage from apartments, residents associations are exploring options. And find, it’s not easy.