We all want our roads to be broad enough to ensure smooth flowing traffic. But with more than 27 lakh vehicles in Bangalore and more than 800 new vehicles getting registered every day, the road infrastructure just cannot keep up to the growing vehicle count. However much the administration tries to widen the roads, there is a limit to this approach. 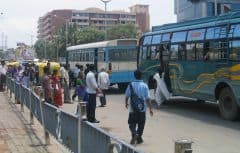 The unchecked growth and usage of private vehicles which constitute almost 90% of the total vehicles in Bangalore can be countered with an excellent public transport service. The Bangalore METRO may be one solution. However, it is extremely expensive, and at best, a solution in the long-term. The most widely used form of public transport is the BMTC bus service. But however efficient BMTC may have appeared to become, it just cannot cope up with the city’s exploding need for transport.

One answer is to end the monopoly status BMTC enjoys and facilitate the entry of private bus operators providing mass local transportation services. For example, TVS used to provide bus transport services in Madurai many years ago. Currently, the laws pertaining to public bus transport services in Karnataka, as well as in most other states, do not allow space for capable and ethical companies to provide a valuable service for the public. In fact, they are kind of tailored to impede their entry.

The public bus transport sector must be opened out totally, for open competition between various players, on a level playing field, subject to a few concessions, where required Classifications such as stage carriages, contract carriages, maxi cabs, etc. must be withdrawn, and annual license fees charged on the basis of the vehicle floor area alone.

But, private participation in local mass transit alone will not do. The state government should adopt some key policy changes to ensure an efficient and competitive public transportation system for Bangalore. The basic tenets of such a policy should be:

An efficient bus transport system (with government and private players operating in open competition) has the potential of becoming the backbone of Bangalore’s public transport system. In large cities like ours, METRO rail can supplement such a system.

What is the likely scenario after a year of implementing such a policy?

Thus we can expect to see commuter usage of two-wheelers and cars reducing drastically, leading to

The central government has already accepted some salient points in its policies and reports. For e.g. the report on ‘Bus Transport Systems’ from the Union Ministry of Petroleum & Natural Gas mentions:

Though many citizens agree with this overall concept, very few are prepared to back it openly, because it is seen as politically incorrect. There are immense benefits to the city with such an approach in our transportation infrastructure sector. If we want livable urban spaces, there is only this way to go.

About Muralidhar Rao 5 Articles
The author has not yet added any personal or biographical info to her or his author profile.

What is “free” about Free Software, who are the people advocating free software and why?

At 76, he goes door to door, asking people to segregate waste

After living abroad for 30 years, Ramakanth came back to Bangalore, only to see the problems plaguing the city, garbage being the biggest.What did he do? Excerpts from the interview.