14 June is World Blood Donors’ day. Many of us may have attended blood donation camps. But often, patients in need of blood are unable to get the service because their families cannot reach out to blood banks in time, or due to the unavailability of a particular blood group in the blood bank, and so on.

How can we be sure that the donated blood reaches the person in need of it?

A group of students from M S Ramaiah College have tried to do just that. To ensure that blood is made available – at the right time, at the right place, for people who need it. They started Sankalp, an organisation that provides information about blood banks, availability of blood and an emergency service of blood donors on call.

One night in May 2003, Rajat Agarwal and his friends, students from M S Ramaiah engineering college were taking a walk in their campus. They heard of a patient in urgent need of blood in the nearby Ramaiah Hospital. They hurried to the hospital and even as they were donating blood, the patient passed away. They later learnt that the patient had been brought to the hospital four hours earlier, but was not given the available blood as the patient had no means of replacing it. This event had an impact on the young students.

The next morning they put up a poster asking for blood donors to register with them. “The next time you have to say ‘no’ to someone in need of blood”, they told the hospital authorities, “please send the person to us”. That is how the drive started says Agarwal, one of the founder members of Sankalp. 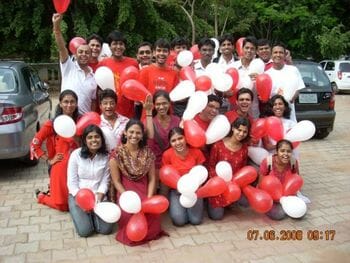 They later contacted different hospitals and other blood banks and realised that the basic network of blood banks did not function well. Sometimes blood could not be tracked when required, or the donor or the replacement unit was unavailable. There was the risk of using blood from a donor who was a stranger to the patient or the hospital.

The friends thus decided to create a network of students and work with the blood banks and hospitals in the city. They found to their dismay that many blood banks did not want to share information. "Finally we found CTC", says Rajat.

It took two years to convince the blood banks and for the mechanism to start functioning, says Rajat. Even today, they struggle to get statistics from blood banks. Most blood banks had a thumb rule of not providing the names of people who needed blood.

Thus tracing people who needed blood was another task and the growing group of Sankalp volunteers started frequenting hospitals, to help people looking for donors. They would take such people to the blood bank so that they would inform them whenever there was a request.

Replacement Units: Some blood banks have a policy that when they provide blood to patients, the patient (or their family) is responsible for finding donor(s) who can give an equivalent amount of blood (of any type or group) back to the blood bank.

All information is now available at the central toll-free helpline 1062. Anybody can call 1062 and find out where blood is available. Along with that, the emergency wing with donors is always ready. The CTC brand name was a factor which helped Sankalp gain popularity and credibility.

The group now has over thousand members, most of them from M S Ramaiah Engineering College. They hold a meeting every month in the college premises. Along with blood donation campaigns they also have put together a Disaster Mitigation Management team. The team had already swung into action during the Tsunami and the Hyderabad blasts.

Sankalp has not charged anyone till now, and they also not want to be labeled a charitable organisation. They dislike the idea of people donating for charity. "We don’t accept a single rupee for any of our activities apart from disaster relief,” says Rajat, ‘We manage everything by ourselves out of a sense of duty and responsibility.”

The organisation plans to expand so that more people can make use of their services. They have members from Hyderabad, Chennai and Mumbai; the network is looking to grow in other cities too.

Ranga Shankara is an excellent initiative to keep “Theatre Alive”, as the fifth anniversary tagline goes and keep theatre affordable and available for citizens.

19 years on, farmers in limbo as govt yet to act on land notified for NICE

Their lands were notified for Bangalore-Mysore infra corridor project 19 years ago. Now their land has no market value, they can’t dare to plant something that’s of value, can’t renovate or rebuild their houses, and can’t be assured of a secured future. A story of how flawed land acquisition policies put lives in jeopardy.