Even as the state government and BBMP recently made yet another u-turn on road-widening plans in Bengaluru, uncertainty remains over what is to come for properties that have been marked for acquisition. 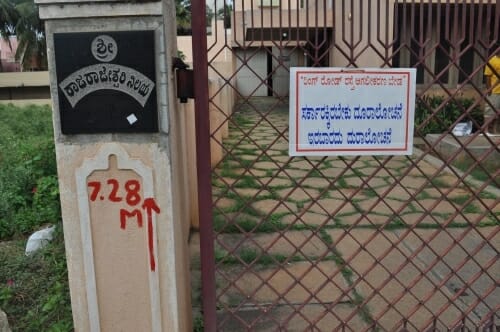 The state government and BBMP have announced that marking of roads for widening will be suspended. File photo.

The Ring Road Property Owners’ Association (RRPOA) for one believes that this is just a “trick” as no orders have been given in writing. Core Committee Member of RRPOA, Venkatesh Murthy says, “They should withdraw this (road widening plans) in writing, then only it will be official, not orally.”

However, BBMP Commissioner H Siddaiah says when instructions have come from Mayor S K Nataraj, there is no need for a written order. “An order is a order whether it’s written or oral”, he says.

Tell him about the concerns that residents have about a flip-flop over widening plans and he is quick to respond. “If I give an order, can my officials go against that? Can I disown what I myself have said?”

But Murthy feels that the state government and BBMP are only making these announcements “to defuse the intense protests from residents across the city”.

In the last few months, several protests have been held in the city, opposing plans to widen city roads at the cost of residents losing their property. The RRPOA itself is one such group that has come together to fight against widening the stretch between Central Silk Board junction on Hosur Road to Nayandahalli junction on Mysore Road.

BBMP Commissioner H Siddaiah says they are now looking to widen roads in the outskirts of the city, where land acquisition will be minimal. File photo.

Murthy feels that the government is only responding to the spate of protests that they have been witnessing in the past several weeks. “A lot of momentum has been gained. So these politicians are afraid of losing their seats”, he says.

He cites the example of a statement made by Transport Minister R Ashoka in December 2009, when he announced that all road-widening works in the city were suspended. Ashoka later back-tracked saying that only work on the Hosur Road-Mysore Road corridor was suspended, due to objections from residents along this stretch. “This is just a trick”, Murthy says, adding, “What knowledge do they have?”

Commissioner Siddaiah confesses that it is the intense public protests and strong remarks that have resulted in their decision to relook each road proposed to be widened. The corporation has also suspended marking of properties for road widening.

Siddaiah explains that the BBMP is now looking to widen roads on the outskirts where land acquisition will be minimal. “Then we will move to extension areas and other areas. We will do what is of least incovenience to the public”.  ⊕

If buses could talk, they’d be squeaking clean!

KSRTC buses at the Shantinagar depot will now be cleaned by a new washing machine, one that has been built in-house.

Road widening or not?

A Yelahanka apartment has court orders to not give up land for road widening, while some local residents demand widening. A group of people protested in front of the apartment on Monday, blocking its gates, with police support.

Despite protests from residents BBMP is yet to build a boundary wall around the drains that were opened up. NGV (Koramangala) residents had to bear the brunt of it during heavy rains last weekend.