Most of you are aware of the 11 pm curfew on Bangalore’s night-life that is in place today, but did you know that a couple of years ago there was a ban on western live music performances altogether?

As unusual as it may seem now, western music performances were put in the same bracket as club or bar dancing. Karan Karthik, stifled by this lack of freedom of expression, wanted to bring about a change in people’s perception of live western music performances. To achieve this, he, along with a few friends, sought the help of the state horticulture department to provide an open space to conduct a monthly music event. After a lot of deliberation, the department consented and thus on November 1st 2008, ‘The Live Gig’ was born. 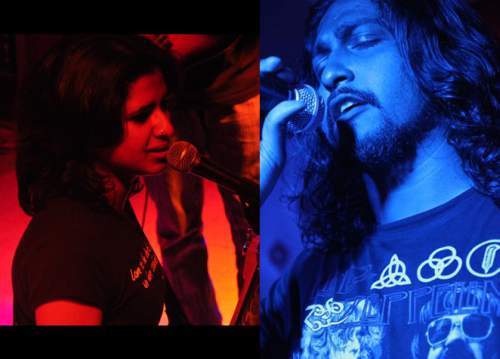 Sowmya Raghavan (left), a student of physiotherapy and Karan Karthik, an engineering graduate, who manage The Live Gig. Pic Courtesy: The Live Gig

A year later, Sowmya Raghavan, a Carnatic music student of ten years, met Karthik at a jamming session in Bangalore. They soon became friends and now jointly manage The Live Gig. Sowmya, a student of physiotherapy at Kempegowda Institute of Medical Sciences (KIMS) by day, dons the role of the lead vocalist of a band called ‘Blueprint’ by night. Karthik, 23, has just finished his engineering and is now dedicated towards managing The Live Gig. He started off as a bassist, but now is the lead vocalist of a band called ‘Innerskin’. Apart from their love for The Doors and The Beatles, Karthik and Soumya share a common interest – they believe in ‘Music without any bias’.

The concept of ‘free music’ in Bangalore actually started in the 70s when musicians Peter Issac and Sandeep Motha along with their friends performed regularly at Cubbon Park. Musicians would get together and were allowed to play any kind of music they wanted to. The Live Gig also follows the same principle of free music without any bias.

The Live Gig, held once every month at the Indira Gandhi Musical Fountain Park in Vasanthnagar, is one of the few places where you could  hear a melodious rendition of a vocal performance in Kalyani Raaga followed by a deafening riff from Iron Maiden’s ‘Dance of death’. Sowmya, 24, believes that by watching these varied performances, people get a taste of a genre of music that they might otherwise not come across. “Isn’t that what music should be about?” she asks.

A performance at The Live Gig at the Indira Gandhi Musical Fountain Park in Vasanthnagar. Pic courtesy: The Live Gig

“We see The Live Gig as a place where people from different walks of life can come together due to their passion for music – irrespective of their affection towards a particular genre of music or their pre-conceived ideas against some”, adds Karthik. In fact, it is this passion for music that drives Karthik and Sowmya towards enabling artists and popularising all forms of music.

Apart from enabling bands by providing them with a platform to perform, they also try to identify talented musicians and promote their music. They do this by either giving these musicians a chance to play at different hot-spots in the city where they can make a name for themselves or marketing them through various vehicles of media. Karthik and Sowmya do this primarily because of their passion towards music and not for profit. “We are not an event management company, but a music management company” says Sowmya. Bands such as ‘Parachute XVI’ and ‘Drones From The Turbine’ have benefitted from events conducted by The Live Gig.

One such event was the ‘Big Mushroom Cloud Festival’ held at Suburbia (restaurant-cum-bar) in April 2010. This event primarily focused on psychedelic music – a genre made famous by iconic bands such as ‘Cream’ and ‘Pink Floyd’. “We wanted to organise an event that would be a coming together of music and visual art. We setup the stage by building a 9-foot-high mushroom (made out of bamboo sticks and white cloth) which glowed in the dark. Along with this, visual art was projected onto the bands while they were performing on stage”, says Sowmya. Although this was aimed at a niche audience, it garnered a turnout of over 200 people.

Another feather in the cap of The Live Gig banner is the international event ‘Deccan Rock’ conducted in April 2009 in Bangalore. This event comprised of foreign bands such as ‘Amon Amarch’ (Sweden) and ‘Textures’ (Netherlands) along with Indian bands such as ‘Kryptos’, ‘Demonic Resurrection’ and so on. This event not only attempted to showcase the Indian hard rock/metal talent but also tried to increase awareness regarding issues such as climate change and global warming – the theme for this event. Deccan Rock was a resounding success drawing in more than 4000 people.

Karthik and Sowmya, with The Live Gig as their mouth-piece are trying to fight the bias and prejudice that exists against certain genres of music. They have endured opposition from different pseudo pro-Kannada activists who were against any form of western music being performed in public places as well as rejection from different corporations who were not keen on sponsoring or promoting semi-professional bands.

At a time when rights to freedom of religion, speech and expression are automatically taken for granted, shouldn’t it be the same with respect to music?  ⊕

Arranged marriages in the era of change

How does Bangalore’s urban, professional crowd find that perfect match when it comes to an arranged marriage?

‘Art connects with the soul directly’

Knowledge must be shared is the motto of this duo. They train hundreds of aspiring students in Kathak and Bharathanatayam across different age groups.