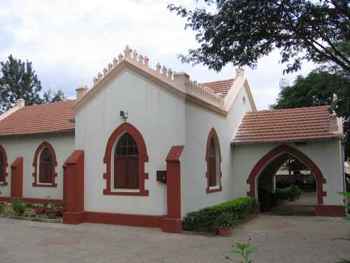 Members of the Church of Church of South India (CSI) congregation and The Anglican Church of India congregation are appalled at this contemplated action of the BBMP. With respect to all Christian denominations, his Highness Wodeyar IX gifted three-quarters of an acre to build an inter-denominational church in the early 1880’s .The church was constructed with funds raised by the Eurasian community and the church was consecrated in 1886 by the Anglican priest of St. John’s, Bangalore.

View of church interior looking towards the altar – the whole altar and rear wall including the reredos (the sacred wooden panel at the back set up with church funds in memory of World War I), right up to the first row of windows at either end will be demolished. Pic courtesy: Krupa Rajangam.

Since then, villages grew around the Memorial Church. Since the 50’s the church has been losing its land for the construction of roads or widening of the same, resulting in what little land is left today. Now the Sanctum Sanctorum (Holy of Holies) will be destroyed for the same – road widening. Furthermore, this 124-year old church is built of unbaked bricks and chunam/mud compound wall. The demolition of even a small section is enough to bring down the entire structure. Today it is the oldest heritage building left in Whitefield.

Road widening is not the solution. This will benefit only corrupt officials, politicians and contractors. What is needed is proper traffic management, and strict rules to enforce lane discipline. Only this will prevent the frequent traffic jams and ease congestion on Bangalore’s roads."

All residents and commercial establishments/shop owners are opposed to this. Margaret Lunel, a resident of Whitefield since 1973 and with family settled here since 1956, is upset at BBMP’s plan, "I am disgusted at the disregard the BBMP has for sentiments of the residents, shopkeepers and minorities and the fact that this is a heritage village."

Residents are not really convinced that this road needs to be widened at all. Dr Thyagaraj who runs Pushpa Nursing Home will lose the entire frontage of his Nursing Home, including reception area and waiting room. He had a similar experience about two years ago when a file-toting official accompanied by a posse of policemen and an earthmover, demolished his compound wall with no prior intimation, and later said it was a "mistake". He had to re-build the wall at his own expense.

"For whose benefit is the road being widened? Certainly not for the residents of Whitefield. And, why should the locals lose their properties and livelihood so that someone else can have a "signal-free" ride?"

Dr Meer who has his medical practice here, will lose his clinic and as well as several shops belonging to his family. They have been residents of Whitefield for generations, and own Meer Sahib General Stores, the oldest store in Whitefield. He questions, "When the PPR (Periperhal Ring) road is being constructed about 1 km beyond Whitefield, where is the need to widen the Whitefield Main Road which is used mainly by residents?". T C Alexander, an active member of the CSI community also agrees. Adds Anil Kothari, the owner of Uttam Jewellers & Uttam Enterprises, "There is never any heavy traffic on this road, so where is the need to de-congest?" 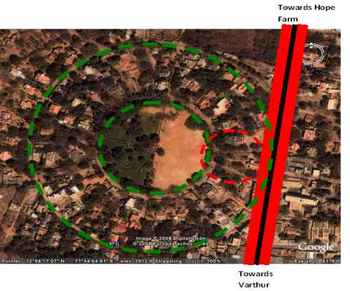 Shopkeepers are worried about their businesses. Siraj Ahmed Sharif, the owner Tip Top Traders and several other shops says, "What will shopkeepers and their families do after all the shops are demolished? Beg?"

Judy Lawrence, another resident is spending sleepless nights. "It’s like awaiting a terrorist attack… We do not know when they will strike and demolish our properties."

A similar situation arose a few years ago on Borewell Road, when a JCB with number plates removed, accompanied by an engineer and a gang of about 50, demolished all the compound walls in the name of road-widening. When confronted, the engineer blatantly replied "We are government… we can do what we want."

Sketch of Whitefield Memorial Church. The portion to the left of the red dashed line is to be demolished. Courtesy: Krupa Rajangam.

Shirley Davis, a senior citizen says her entire house, which is about 100 years old, will be demolished, "Even if I get land to re-build, as a retired senior citizen I do not have the resources or the energy to do so."

Whitefield is one of many areas that will be affected by the proposed (indiscriminate) road widening works to be undertaken right across Bangalore. Given the number of (historic) areas in peril, Whitefield may or may not figure high on the priority list of areas whose very character is under threat but I feel it should be.

As generally assumed, it is not a modern day development. The site of a unique Anglo-Indian settlement developed in 1882, the proposed road widening works impact the original village, with its unique circular layout but also result in partial demolition of the historic Memorial Church and Whitefield Club premises (originally the Church Institute and Library).

Further, a number of bungalows (modeled after those in the Cantonment and very similar to them) and plots will lose their frontage, while the small independent shops which service the settlement will cease to exist.

I first visited Whitefield two years ago. The inner and outer circles (of Whitefield) took me by surprise as not only did it look different from other heritage precincts we found it also appeared to have been largely forgotten by time.

However, this impression didn’t last long! All too soon I heard from residents about proposals to bifurcate the central circle into two and give one half over to commercial development, road widening proposals threatening the church and bungalow plots.

Feeling a sense of urgency to do something, I applied for and secured funding through The Indian National Trust for Art and Cultural Heritage (INTACH) to trace the settlement’s history, document its layout and some of the important structures within.

My six month research project turned up some interesting and important facts. Whitefield is an Anglo-Indian settlement developed in 1882 and so called after D S White, the founder of the Anglo-Indian Association, who was instrumental in creating this little ‘peaceful’ enclave. It was supposed to be and still is a unique experiment in town planning and has its roots in ideas proposed by Plato in his work, ‘The Republic’. Thus, it was planned to be a self-sufficient village, where ‘all would work towards the common good …’

Moreover, during my interactions with the local community, over the research period, I felt that they were truly aware of their past and the need to carry it forward for the benefit of future generations.

Finally, as there is no heritage legislation in Bangalore, there is no legal protection for all the historical areas to be affected by road widening, so it is up to citizens to make an effort to voice our concerns. It seems quite clear to me that the residents are not against development but rather against unplanned, indiscriminate works in the name of development.

Krupa Rajangam is a Heritage Conservation Consultant and Principal at Saythu.

About Deepa Peck 4 Articles
The author has not yet added any personal or biographical info to her or his author profile.

After repeated reprimands from the High Court, the BBMP is now preparing a ‘proper’ list of illegal religious structures in Bengaluru. The details will be put in public domain, and demolition of the illegal structures will start soon, says BBMP Commissioner.

Is the new amended Real Estate Bill consumer-friendly? Does it balance the rights of both builders and buyers? Here is what Bengaluru citizens found out.

Abdul Azeem is standing in Hebbal on a JDS ticket, and vows to ‘eradicate rowdyism’ in Hebbal.