S K Nataraj is Mayor and corporator of Sarakki ward. Even as he plans to visit each and every ward in order to understand their problems, citizens are pointing to issues in his own ward that need attention.

Sarakki ward includes 6th phase JP Nagar, a BDA-planned area, which is supposed to have basic facilities available to its residents when compared to revenue sites. But citizens here continue for suffer from inadequate piped water supply. Resident Anand Rao, in his late fifties, says that BWSSB officials point out that the line is at a higher point and the pressure of water is not sufficient.

Interestingly enough, the KR Layout area nearby, a revenue pocket (underdeveloped) gets better water supply – because of an earlier arrangement done by the erstwhile CMC.

“Due to this problem, I had to go for a private tanker last week,” says another resident Col (Retd) C K Seshadri. He has also filed a complaint with the local BWSSB office.

The one available playground in the 6th Phase part of Sarakki ward is slowly being converted to a big Iyappa temple. Now a Navagraha temple is also up coming there. Children don’t have a playground.

For walking, citizens do not have a park. There is a beautiful park in the ward but it is 1st phase, on the other side of 15th Cross Ring Road.

Traffic from Bannerghata Road to Sarakki is now using 16th Cross, because of the underpass project. 16th Cross is marked as a one-way and there is a signboard that says heavy vehicles are prohibited. Still, heavy vehicles are plying this route. A truck damaged a BWSSB water valve pit (located near the edge of the road) in the process. Seshadri complained to BWSSB officials, who merely filled the pit with mud. The surface continues to sink further.

Hole in the wall

In the Jayanagar bus-stand you will find a wall portion with what looks like a crack running top to bottom, wide enough that you can see the 4th Block shopping complex through it. 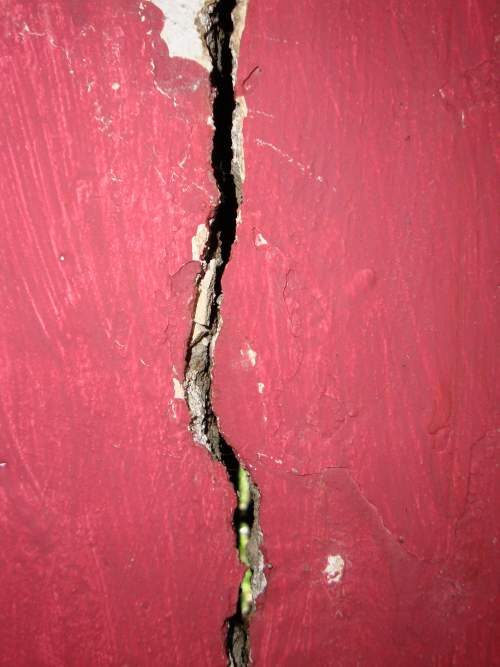 Civil Engineer Narayan Murthy, resident of Bannerghata Road says that gaps are normally provided to allow buildings to get adjusted to climate, and it is normal to include such gaps every 100 metres. However, he notes that the crack has to be filled with a special padding or the building may lose its strength. The gap has not been filled and the plastering is a mess.

The second floor of the Traffic and Transit Management Centre (TTMC) is still half complete. One portion there has been given to the BMTC’s students bus pass counter. Chief Minister B S Yeddyurappa, with Transport Minister R Ashoka inaugurated the transit centre one year ago.

Beware of fake police on the streets

JP Nagar Police Inspector S K Umesh has started an awareness program to caution citizens. Informative banners have been displayed across the neighbourhood. 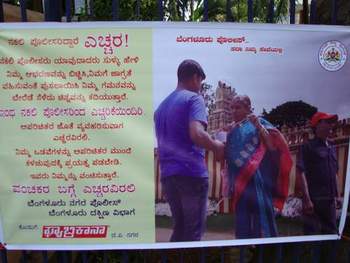 Umesh explains chain snatchers are using new tactics, like displaying fake Police ID card, pretending to be police officials. Targeting women walking alone, the con-men talk to the victim about recent murder cases nearby. They advice the women to keep their jewellery in a cover, and offer her a cover.

When the woman gives them the jewellery to place inside the cover, they switch packets and replace the real cover with one holding fake ornaments.

If the woman hesitates, another person nearby will come and vouch for the (fake) police man, saying she also safeguarded her jewellery inside the cover when out walking.

Umesh says, “If you don’t know the person who comes to talk you, you should not respond to him”. If any such incident happens, the public can contact him directly on 9480801517.

Namma Metro’s Phase 2 connecting 72 km across Bengaluru, especially the IT corridor isn’t on track. But Metro has managed to make profits in last financial year.

More people, less jobs: where is sustainability in master plan?

With residential areas increasing and commercial areas decreasing in the master plan, there is no real plan to make Bengaluru sustainable. Insights from a citizen.