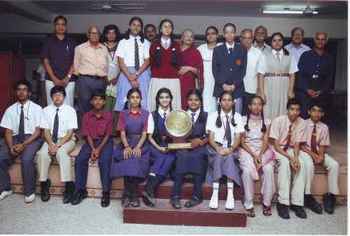 Participants in the debate competition, with the Jnanajothi team. Pic: Prasad

Students from standard 8th to 10th participated in this debate (some spoke in English while others spoke in Kannada) which was judged by a panel comprising of V R Kulkarni (Secretary, Swasahaya NGO), N B Jayaprakash (Director, Dignity Foundation Bengalooru Chapter) and Rekha Murthy (Officer-in-Charge, Help Age India, Bangalore).

Many who spoke against the topic felt that parents’ affection for children is much stronger than the law and that is why senior citizens rarely speak out when they are being abused. Further, older people worry about the potential fallout when dirty family linen is washed in public, and so do not speak up. The general perception that legal matters take a long time to resolve also added to the problem. So the law would be of little help to elders who were being abused – in all probability the abuse would continue and increase.

The general perception of the students speaking for the topic was that elders should start speaking up for their rights, and that the courts should work towards resolving such cases quickly.

In addition, as a part of its Vidya Kiran Scheme, which has been running for three years, Jnanajyothi distributed stationery kits to nearly 50 children (of domestic service providers and locality vendors) of class II to PUC.

Through such activities, Jnanajyothi is attempting to bridge the gap between people of different sections of society while also building a mutual support structure for elders and children in and around Banashankari II Stage.  ⊕

Clearing the drains before the rains: a pictorial how-to guide!

A team of citizens cleared rainwater channels and helped rainwater flow into the lake. Here’s how they did it.

Thousands of preschools and daycares may have closed during the pandemic, but Karnataka has no policy or guideline, let alone help for the sector.

Bangalore’s Mysore Mills and Minerva Mills have faded into history. However, the entrepreneurial spirit of Dattatreya Narayan Sirur who managed them are ever-inspiring.