Even though Bangalore does not have many professional clubs, the game is increasingly becoming popular, according to observers. “Over the last decade there has been lot of exposure to football through the broadcast of international matches on TV and internet. There are many sports camps and private academies now and people are taking to these,” says Sunil Kumar K, Player at Aeronautical Development Establishment (ADE) Football Club and former Captain of the State Football Team.

Ramesh B, an upcoming player, says, “Earlier even though I had interest in the game, I couldn’t get much exposure and faced difficulties. Three years back I joined DYSS Football Academy and the coaching gave me lot of opportunities and experience. Now I am getting offers from many clubs. Though I have not made any long term decision about joining a team, my ambition is to represent India.” The 19-year-old has played for BEML Football Club, State Under-19 and Under-21 teams, and has currently been selected for the Santhosh Trophy team. 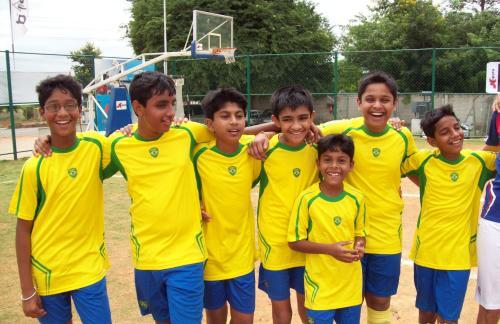 There are former coaches and players who give training to young players for free. J L Andrew, Coach of the State Under-19 team and former President of the Indian Telephone Industry (ITI) Football Club, coaches 12-22 year-old players for free in Austin Town. “This programme started in Austin Town Ground a long time back. I started coaching 15 years back, there are also other former coaches and players who train youngsters,” he says. There are nearly 40 students in Andrew’s camp now, who are trained for professional games or for fitness development. The coaching is for two hours everyday except on Sundays. Both amateur and professional players get training here.

“I started this camp because I found that the players who came to the grounds for practice had potential, but no guidance. I started training them one-by-one and gradually formed teams,” he says. The camp has churned out good players such as R C Prakash, who plays in Santhosh Trophy matches and has represented India three times in international matches. There are similar camps in areas such as Sreerampuram, Periyar Nagar and Jeevanahalli.

The finals of the annual KIPSTA football tournament will be held in the city on July 4th. Twenty teams are participating in the tournament, which began last week. The teams, which comprise of amateurs from different backgrounds, were selected on a first-come first-serve basis.

SPT, a private sports management company in Sarjapur Road, is one of the many academies that promote less popular games such as football and golf. Kanishk Saran, Vice-President of SPT, says, “When we started football coaching six years back, we had only 20 students. Today the number has grown to 500 kids in the 4-18 age group. People from different age groups use our grounds for matches. Corporates also hold football tournaments for leisure these days”.

There are around 100 Football Clubs (FCs) in the city that play in the Bangalore Football League and all the major teams are owned by public sector companies. There are only a couple of teams such as Hindustan Aeronautics Limited (HAL) and BEML make it to the National League. Lack of financial support in the grassroot level is seen as the main reason for this setback.

“It takes Rs 3-4 crores to maintain a team in the national level, which teams here cannot manage. Also public sector companies that earlier gave jobs to their players, are not doing so now. We are also losing football grounds in many areas due to rapid construction activities. But if the matches are good, people do come to watch. There were close to 20,000 spectators at the Bangalore Football Stadium for HAL FC’s qualifying match in May for the National League First Division,” says Kumar.

Teams such as HAL buy free tickets for viewers as well. “We get revenue from big matches only. But we sometimes get a limited number of free tickets for HAL employees and the public to promote the game,” says former player and HAL FC Co-ordinator Subhash Kumar.

For those interested in graduating to professional football, the going is not very easy. One can join football clubs and then get selected for bigger clubs and matches according to their performance. “It is easier to get exposure in games like cricket. For football, the initial salaries would be less, but a player in the National League gets paid close to Rs 40-50,000 per month,” says Afsar, Coach at Delhi Public School (DPS), Kanakpura. The school has 40 football players in its U-14 and U-16 teams combined, and participates in 10-15 matches a year.

The finals of the annual KIPSTA football tournament will be held in the city on July 4th. Pic credit: Jatin Arora.

Karan Rana, 10th standard student and U-16 team member at DPS, says, “I have been taking the game seriously. Along with studies, I am planning to continue playing. Within the next five years, I want to join a local club and see what happens.”

“Ultimately it is the interest and initiative of the individual that matters. It requires a lot of hard work to get noticed,” says Subhash Kumar.   ⊕

You don’t need to be a theatre veteran to stage a play here. Just your talent and passion is enough.

BIFFES was more accessible and more inclusive compared to the previous years. And Iranian films continued to mark their presence at the film festival.