Dr Shyamala Mani, Associate Professor at the Centre for Neurosciences (CNS), Indian Institute of Science (IISc), was conferred the Chevalier de l’Ordre des Palmes Academiques (Knight of the Order of Academic Palms) by the French Government on June 14th, 2010. The award, given to individuals for their contribution to academia and education, was awarded to Dr Shyamala for her research on neonatal lesions and the effects of malnutrition on the fetal brain. 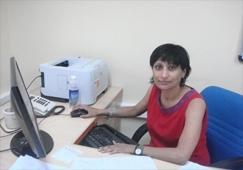 Originally hailing from Vellore, Dr Shyamala completed her graduation in Psychology from Delhi University and then went on to complete her Master of Science, Doctor of Philosophy (PhD) and Post Doctorate from the US. After working in the US for a few years, she moved to India to work with the National Brain Research Centre (NBRC), Delhi for nine years, and then moved to IISc.

Specialised as a Developmental Neurobiologist, the 46-year-old scientist believes that science is going through a boom-time in India and more young people should pursue pure sciences.

Excerpts from an interview with Dr Shyamala.

Having moved to Bangalore after working in US and in Delhi, how do you find the science scene here?

Bangalore is a very vibrant city for academics and scientific research. There are many good institutions here. Delhi has been good, but Bangalore is very conducive. It’s one of the reasons I moved here.

Can you tell us more about your project?

It’s an Indo-French research collaboration to find about specific kinds of neurons in the brain. It’s very long-term and we are hoping that it will help in finding cures for brain disorders like cerebellum degeneration.

Being part of a foreign collaboration project, do you think such tie-ups are necessary to take science forward in India?

Neuroscience is a very new field in India, unlike the pure sciences. But the reason for foreign collaborations is not lack of resources, but because such research is a global activity. It wouldn’t make a difference whether we collaborate with scientists within India or outside.

As a woman scientist, did you face many barriers in your career?

Discrimination and bias against women does exist, but it is possible to carve a space for oneself in certain levels and certain circumstances. Glass ceiling for women exists in many levels, one has to learn to deal with it.

How easy is it for youngsters to opt for science as a career?

Students who opt for science in the PUC level go into engineering and medicine mostly. Many students are interested in pure sciences, but they don’t see science as a viable career option. Science as a career is different, but rewarding. At some stage you can pursue the questions that truly interested you. The best about being a scientist is the joy of discovering; it maybe hard, but so is every other job.

Do youth get enough exposure to science here?

Not much. At the undergraduate level, science is not made interesting at all. To students, it looks as if everything has already been discovered and the possibilities are not talked about. The excitement of science is not conveyed. But in Bangalore there are institutions like IISc, JNCR (Jawaharlal Nehru Centre for Advanced Scientific Research) and NCBS (National Centre for Biological Sciences) that one can interact with and gain exposure from.

What do you think will attract more students into the pure sciences?

Science is going through a boom-time now. Many universities are being set up now, and pure science is seeing a huge expansion in India. So there’s going to be many career options in teaching itself. And a boom in education will automatically translate into development of the pharma industry, biotech industry and so on. So there will be career options in academia, research and industry. One can pursue teaching and research simultaneously as well. We just need to inform students about these options.

Personally, how difficult was it for you enter and maintain a career in science?

I was lucky that I was not pressurised to follow any particular path. My career has had ups and downs. I had kids when I was doing PhD and it was a little hard then. But I managed because of a supportive environment. I think that’s where we have to focus on supporting women scientists as many women drop out of science after a while because of familial responsibilities.

What prompted you to return to India?

Neuroscience has already been established as a discipline in the US, but in India it started growing about a decade back. In US, I had to fit into an already established system, while in India there was the excitement of being part of something new. It’s more of an adventure here. Otherwise the work environment has not been much different in India and abroad.

Your advice to aspiring scientists?

If you are passionate about science, you have to pursue it anyhow because you maybe able to contribute something. And women aspirants should look to other women scientists when they face difficulties; it’s not as if the field is totally unfriendly. In fact we are finding more women students than men in the Ph.D level, so things are changing.   ⊕

She rakes in medals for India even after 3 decades

Reeth Abraham scorched up the track for 15 years. She brought in three gold medals and one silver at the South Asian games. She continues to bring in the medals at the masters event.

It looks that our BBMP act only after being pulled up by the High Court Appointment of Ward Committees, Garbage Segregation at Source, Scrapping of Signal free corridor from Koramangala to Sirsi Circle, not allowing

The basics of babyproofing

New parents get advice from every corner on keeping the baby safe. How far do you go?