Going by the good responses photography workshops elicit, most people, having invested in a good camera, seem to feel the need for learning the basics right to become better photographers. So when Kalyan Varma, a naturalist and wildlife photographer (www.kalyanvarma.net) advertised a two-day digital photography workshop on his blog kalyan.livejournal.com I decided to attend.

This was Kalyan’s first-ever photography workshop, and he held it on 10-11 May at hotel Nandana Grand in Koramangala. The content was broadly divided into four sections distributed over the two days. On day one, Kalyan had scheduled the basics of photography and composition, purchase and care of photographic equipment. On the second day, he had organised a trip to Lalbagh, a photographer’s paradise because of its architectural heritage, people, landscape, flora and fauna. 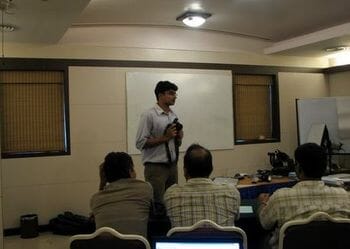 Kalyan Varma demonstrating equipment at the Digital Photography Workshop, May 10 and 11, 2008. Pic: Author.

This was to be followed by an introduction to post-processing, and an overview of photographs, with an analysis of their technical and artistic qualities.

Based on his wide-ranging experiences and internet research, Kalyan had designed his own slides to illustrate his talk, ensuring that they had maximum visual appeal and clarity. His expertise in handling the various pieces of electronic equipment during the demonstrations made for a good impact on his audience.

The group of 13 in attendance were from diverse backgrounds. The majority were IT professionals, with one doctor and a homemaker. Two had come all the way from outside Bangalore, one from Hyderabad and one from Delhi to attend the workshop.

Kalyan ensured that this workshop was for general photography though he was primarily a wildlife photographer. He emphasised that it was important to get a good photograph rather than depend on rectifying it by means of post-processing. Post-processing, he stressed, was only for enhancing the image a little, but the basic image had be good in the first place.

Beginning with a brief of history of photography he quickly moved on to the specifics of a DSLR (Digital Single Lens Reflex) camera, and explained how the sensor was the most delicate and important part of the camera. He then explained the concepts of aperture, shutter, and the most important aspect of good photography, exposure. By setting these properly, one could ensure a good photograph even in challenging conditions. He encouraged each of us to play around with either our own cameras or his equipment.

He also spoke about the aesthetics of photography – the rule of thirds and the different forms and elements in composition. He pointed out that composition was subjective and that sometimes one could break all the unwritten rules and yet get great photographs! But in general, he said, some norms of composition held good. He touched briefly on post-processing tools such as Photoshop and GIMP before breaking up for the day.

We met up early on the second morning at Lalbagh, and our motley crew of photographers, armed with cameras and lenses, joined the other walkers and groups (the Bangalore birders group was there, as well as the Lalbagh Walk by Vijay Thiruvady). We wandered around, trying out the concepts we had learnt the previous day in an effort to get good photographs.

Participants of the Digital Photography Workshop at a field trip to Lalbagh on 11 May. Pic: Author.

Lalbagh is one place where one can do architectural, landscape, nature, macro, and people photography at the same time; we therefore spent a pleasant few hours clicking away, and met up at the workshop venue once again after an hour’s break.

Kalyan then took up post-processing, declaring that in his opinion, image enhancement was the object of post-processing, and image manipulation (adding the contents of one photograph to another, for example) was unethical. But then, he agreed, this was an eternal debate. Kalyan next looked at the images we had clicked in the morning and suggested changes or improvements.

The workshop was also peppered with information on the main brands of cameras available in the market and how to choose the camera best suited to one’s requirements. Kalyan spoke knowledgeably on the software and hardware necessary to download the images from the camera to the computer, photographic equipment such as tripods and monopods, tele-converters for the lenses, camera bags and light meters. He emphasized that cameras, especially the top-end ones, were hardy pieces of equipment that could withstand rough treatment.

His description of how his camera and lens was half under water during a shoot had us all wincing, used as we are to treating our camera equipment with utmost care. Kalyan then showed us some world-famous photographs, analysing their elements and pointing out what made each photograph stand out, raising its level from good to great.

The workshop wound up with the note that we apply our recently-gained knowledge, practice the skills until they become second nature to us, and consistently improve upon the quality of the photographs we take. Kalyan expressed that he learnt a lot from his first workshop too. He felt he could have managed his content better, and the need to distinguish between a basic and advanced course to choose the participants accordingly.

All participants unanimously agreed that the workshop was helpful. Some wanted Kalyan to cover wildlife photography as well, which he promised he would soon. One of the participants, Usha Sainath, who had decided to get to know her Canon S3IS really well, said that her awareness level of what the camera could do has really gone up, and she is looking forward to more trips where she can put her new-found knowledge to practical use.

However, Ashok, who had come with his sophisticated 500mm lens, and Harsh, both felt that if possible, the field trip time could be increased; but realistically, they did agree that a longer time out in the open air was just not possible in the heat of May!

The cost of the course was Rs.4000/-, inclusive of lunch, tea and snacks, and all course material.

On the whole, I found that the workshop indeed helped me understand the basics and aesthetics of photography better. As I continue to use the precision equipment that a good DSLR is, I hope to improve in both my images as well as my artistic sensibilities! Thank you, Kalyan Varma, and I hope your workshops go from strength to strength! ⊕

A bird race that isn’t one