Amidst all the excitement of the FIFA World Cup, Bangalore had its own mini world cup tournament last week, with players representing France and Spain fighting it out in the finals on Sunday. The KIPSTA Cup football tournament ended with two ‘France’ teams – Rootsports (representing Bangalore based sports management firm Root Sports) and BSSF (Bangalore School Sports Federation) – winning the cup in the Senior and Under-15 categories respectively. The runners-up in the two categories were ARM Technologies Pvt Ltd and SPT (from SPT Sports Academy) respectively. 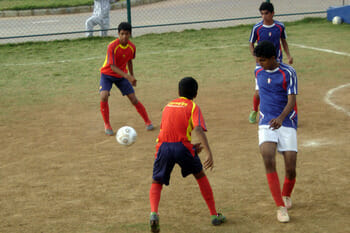 A small but enthusiastic audience watched the 30-minute-long finals with bated breath, punctuating an occasional hit or miss with cheers and sighs. In the senior category, ARM put up a good fight before bowing to Rootsports to a score of 2-1. In the U-15 category, BSSF emerged clear champions by beating SPT with a score of 4-0.

The players who scored the highest number of goals in the tournament were given the Golden Boot Award. Abhinand Gokul of United Football Club won the award in the senior category with a score of nine goals, while Umandeep Singh of BSSF won in the U-15 category. Singh scored 13 goals.

All teams in the tournament were allowed to represent any of seven countries among England, Brazil, France, Germany, Argentina, Italy and Spain. For the adult category, there were four pools with five teams each, which enabled every team to play at least four matches.

“This is the first KIPSTA tournament in the city and we have got a phenomenal response. Our idea was to make team sports more accessible to the public,” says Ravi Shankar.

Amit Chacko Thomas, captain of Root Sports team, is also one of the founders of Root Sports Academy. The coaches working there got together to form a team, and the tournament gave them a rare chance to participate in a game.

"Being a sports management company, we usually organise tournaments rather than play in them. In our academy we mainly have kids. There are also many corporates that are enthusiastic and show interest in football," says Thomas, a resident at Wind Tunnel Road, HAL.

For ARM Technology employees, the tournament was a good opportunity to play against more experienced teams. The team captain, Deepkanwar Singh Bhullar, believes that more corporates should promote sports among employees.

"Games like football will give employees a break from their routine desk jobs and keep them healthy. Many are interested in the game, so companies have to encourage them," says Bhullar, a Sarjapur Road resident.

The entire BSSF team comprised of 10th standard students of Frank Anthony Public School in Indiranagar. The team joined BSSF academy only a few months ago and are planning to pursue professional football. “We have been training in football in school for the last 3-4 years and have played in many school level tournaments. After joining the academy, we want to take the game more seriously,” says team captain Atlee Afroz.

The runner-up SPT has players from different schools in the city. Gautam Misra, captain of the team, is an 8th standard student at Delhi Public School (East). The team comprised players who were 12-13 years of age.

The players agreed that football is seeing a steady progress in the city (See this article). Thomas says, "I’m from Kerala, but have been living in Bangalore for the last 4-5 years. The interest in football here is not as high as in Kerala, but the game is alive and well, in some pockets in the city. There are many inter-corporate tournaments happening."  According to Bhullar, the main problem in the city is finding football grounds, as good grounds are mostly found in outskirts only.

The chief guests at the event were T Shanmugham and Arumainayagam, former footballers who had represented India in Olympics and World Cup. "Earlier there was a dearth of facilities, now players are getting more exposure and better training. Bangalore has many clubs and is giving its best; once the government takes more interest in the game, hopefully the game will improve," says Arumainayagam.

Following the trend, KIPSTA is planning to organise a more competitive league match next year. "People know the game and its technicalities well, football has lot of potential here. This year, we could not accommodate many teams due to problems like delayed registration, next year (we) will be more organised," promises Decathlon’s Sinha.

Change in hospitalisation protocols of COVID-19 patients, BBMP yet to reach property tax targets, startup jobs under threat – catch up on this week’s news in our roundup.