The Karnataka High Court’s order with regard to the state government’s proposed war memorial project is likely to be pronounced during this week. Just last week, the BDA had begun work at the Indira Gandhi Musical Fountain Park, where the memorial is proposed to come up. This was, however, stalled following several media reports that suggested that going ahead with construction work amounted to contempt of court as the case is subjudice. 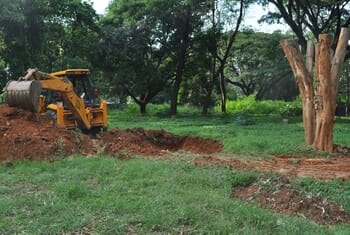 Last week, the BDA had started construction work at the Indira Gandhi Musical Fountain Park. This was later stalled after objections from the public. Pic: Vaishnavi Vittal

The proposed war memorial project, to be built at an estimated cost of Rs 12 crores, has been in the eye of a storm for several weeks now. While the Detailed Project Report (DPR) of the memorial says "Beneficiaries of this project broadly include all Bangaloreans especially local people in and around the project area…", these very "local people" have taken the project to court.

In April 2010, the Krishna Apartments Owners’ Welfare Association filed a Public Interest Litigation (PIL), stating that the proposed war memorial is in violation of the Karnataka Government Parks (Preservation) Act, 1975. The respondents in the case include the agriculture and horticulture departments of the state government, the BDA Commissioner, Chief Secretary of the state government, public works department, home department, BBMP Commissioner, Agenda for Bengaluru Infrastructure Development (ABIDe) task force and the National Military Memorial Committee.

What are the contentions?

As stated above, the petitioners have argued that the respondents have violated the provisions of the Karnataka Government Parks (Preservation) Act, 1975.

The petitioners’ central contention is based on the Act’s Section 4(2). This section bars the government from giving away land (legally termed ‘alienation’) in parks through sale, lease, gift, exchange, and mortage.

The petitioners have argued that the agriculture/horticulture department, under whose custody the park is, have violated the above Act by giving away land from within the park to the National Military Memorial Committee.

The PIL also contends that the agriculture/horticulture department "has a duty to maintain park and duty not to fell any trees" and having allowed the National Military Memorial Committee "to carry out a project that would involve felling of trees and putting up structures", has failed in its duty.

The petitioners are also relying on  section 4(1) of the Act which says:  "it shall be the duty of the State Government to preserve and maintain as Horticultural Garden the parks to which this Act is applicable and take such action as may be necessary to improve the utility of such parks as (and) such gardens."

The petitioners say that putting up a structure measuring not less than 1000 sq metres in the scheduled park and proposal to cut or fell trees, shrubs, plants and bushes here, are both in violation of sub section (1) of section (4) of the Act.

State Advocate-General Ashok Haranahalli says that no transfer of land has taken place. "When the land is given from one state government department to another, that is not alienation. The land still remains with the state government. The committee that has been formed will only look into the running of the war memorial", he says.

Haranahalli goes on to explain that the entire memorial will be underground with greenery on top. He adds that only four eucalyptus trees will be felled for the project.

Most of the controversy over this project recently was based on media coverage on the number of trees that were to be felled to make way for the memorial. (This was one of the contentions of the petitions, but not the central one.)

In response to a Right to Information (RTI) application filed by Citizen Matters, the BDA’s released its detailed project report (DPR) for the war memorial. Even though a drawing in the DPR states that four eucalyptus trees will be felled, a footnote says it is all "subjected to site condition at ground".

A drawing from the detailed project report (DPR) of the proposed war memorial. This drawing states that four eucalyptus trees will be felled “subject to site condition at ground”. Source: BDA

On the question of which trees are to be felled, there is still some confusion. Contrary to what the DPR says, in a response to a different RTI application dated April 4th 2010 to one T Ashok, the BDA says that four trees will be felled including both eucalyptus and Ashoka trees.  This is also confirmed by BDA’s Superintendent Engineer A N Thyagaraja who says that four trees – three eucalyptus and one Ashoka tree will be felled.

The war memorial DPR, authored by city architect-firm Mathew & Ghosh also says that a "public opinion survey has been conducted on the basis of a sample of cross section of intelligentsia drawn from lawyers, doctors, engineers, academicians, journalists and other opinion makers in urban situation. Interactive sessions with NGOs and various members of the city public also formed part of the exercise in this direction." It goes on to say that "the project is judged to be environmentally and socially acceptable."

However, the BDA was not able to answer questions about this opinion survey at the time this article went to print. BDA’s Thyagaraja says he is not aware of it and asked for time to revert. Trigam Mukherjee, spokeperson for War Memorial Committee Chair and Rajya Sabha MP Rajeev Chandrasekhar also did not have information about this opinion survey. ⊕

This Japanese play has been performed across the world with different actors for the past two decades. It is a powerful play which makes the audience introspect.