In the two-day BBMP council session on water, as each corporator spoke about the water problem in their wards, they all had one demand in common. Borewells. And more borewells.

"I need 20 borewells in my ward", said one. "Give me 10-15 borewells", said another. At the end of the session, as BWSSB Chairman P B Ramamurthy announced the various projects taken up by the Board, the corporators requested him to mention the immediate plan of action to address the water crisis and demanded a response to how many borewells were going to be installed immediately.

Mayor S K Nataraj and BWSSB Chairman P B Ramamurthy announced that borewells will be drilled in each ward to tackle the looming water crisis. Pic: Vaishnavi Vittal

All this much to the chagrin of the corporators who waited two days to listen to an announcement from the Board, hoping for some good news.

Through the two-day session, Corporators expressed their anguish about water-related problems in their ward. Dr M S Shivaprasad, BJP, Aramane Nagar (Ward 35), said that even after digging borewells, motors and pipelines were not attached. "It is difficult to contact the engineers with regard to this borewell problem", he said.

Another corporator, K Poornima, Congress, Basavanapura (Ward 53) said that out of the 65 borewells in her ward, only 30 are in working condition. "Another ten have very little water", she said. In Ward 71 (Hegganahalli), Govindegowda M B (Independent), said that out of the 55 borewells, only eight are functional.

Corporators also complained that borewells were disconnected because electricity bills weren’t paid. They requested the BWSSB Chairman and the Mayor to look into this as well.

Gangadhar H N, BJP, Rajgopal Nagar (Ward 70) said there is not a single BWSSB borewell in his ward. Shivakumar K (Independent), Shantala Nagar (Ward 111) said that despite promises made by officials to drill borewells in his ward, not a single one had been installed so far. 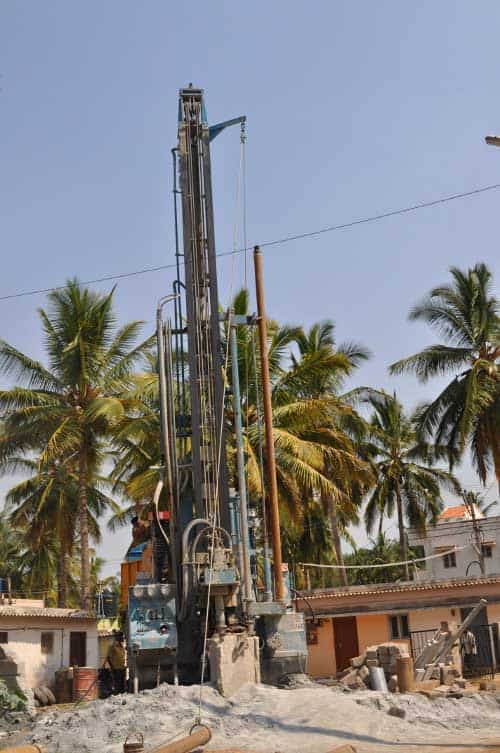 Seven borewells will be drilled in newly-added wards and four in old wards. File photo

Others like Lavanya Ganesh Reddy, Congress, Lingarajapura (Ward 49) said that out of the 20 borewells in her ward, only eight are in working condition. This is also the same ward where, last year, eight-year-old Abhishek was washed away in a storm water drain. Lavanya reminded the officials about the incident and appealed to them to not allow a repeat of this again, by being prepared for the monsoons.

The requests for more borewells came from corporators of newly-added wards where Cauvery water is not supplied. K N Anjaneya Reddy, Congress, Kadugodi (Ward 83) said he does not even receive water through tankers in his ward. "Water level in the borewells have gone down", he said. In Singasandra (Ward 191), half of the borewells have dried up, said corporator Kavitha Babu Raj (Congress). Neither does the ward receive Cauvery water.

BWSSB Chairman Ramamurthy said the new areas will continue to be dependent on borewells till the end of 2011 or beginning of 2012 when the Cauvery IV stage II phase project is completed.

Cycle to the blue mountains

The Tour of Nilgiris, starting this Thursday, started out as a fun trip. It now aims to spread the message of adopting cycling as a sustainable and socially responsible means of transport.