If Corner House ice creams continue to be sought after despite the many competitors in the market, it is due to the characteristics of this brand. Quality, quantity, consistency, value for money and the importance of customer feedback. All maintained over the years by the values that A Narayan Rao, the founder of Corner House, lives by. Lack of greed and contentment in life is the way he puts it.

Launched in 1982, as a bakery and fast food place, Corner House saw some rough times in the beginning. Though items like chicken rolls, burgers and pizzas did very well, the Goan eatery established a year later was a failure. 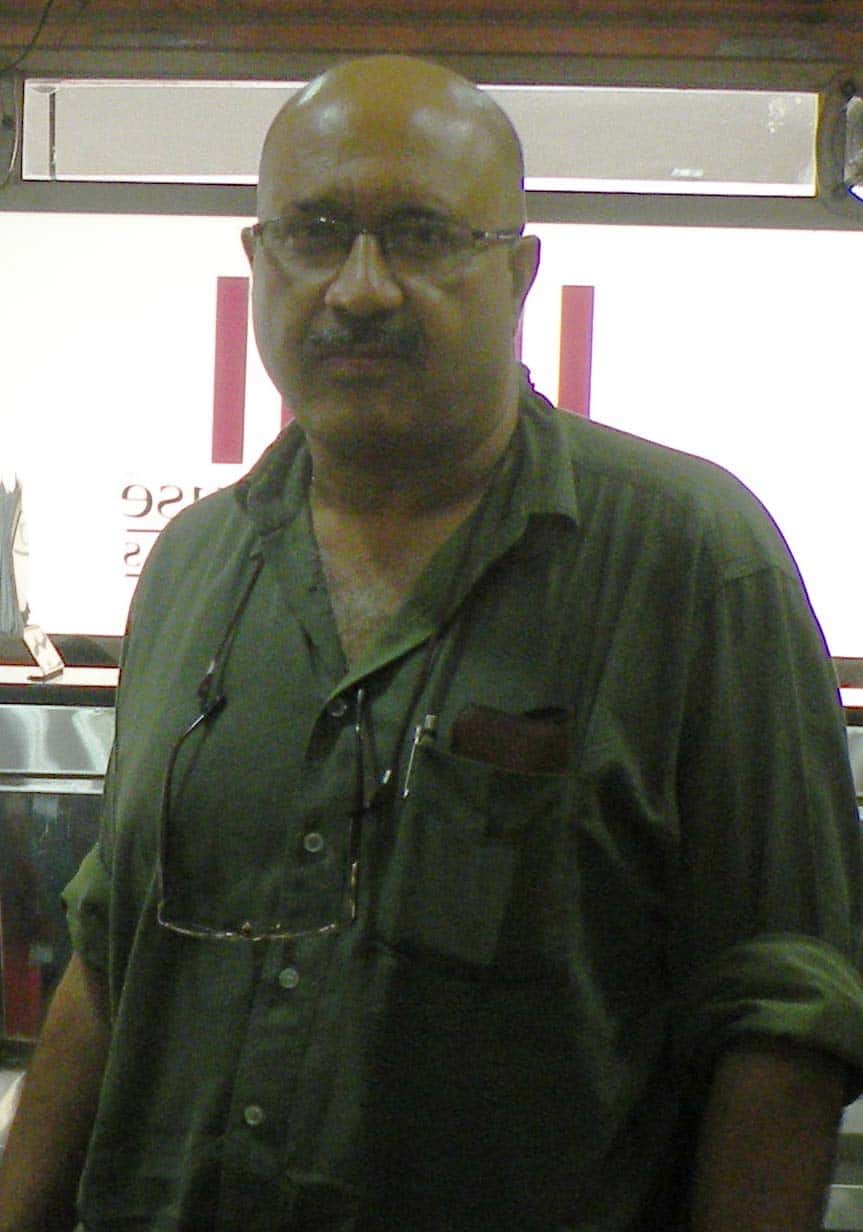 "We launched the concept before its time," admits Rao. "People were not keen on unfamiliar food." So it closed down and a Chinese restaurant was set up. This was better, but only slightly. "The kitchen was small, not geared towards fast delivery and for the customer the waiting time was long," Rao reminisces. By 1987, the Chinese fare too came to a halt and Corner House went back to how it began, as a fast food joint.

However, much before he became this Man, Rao had other avatars. His first professional qualification was in agriculture. Why agriculture and how did he go from there into the food business? "I did not have great marks that would get me admission into the usual professional courses and did not want an arts/ science/ commerce degree. So I applied for agriculture," says Rao candidly.

"But after graduation I wondered what to do. I had no land to work on. I could not see myself becoming a pesticide salesman for a multinational company or working for the government either. So I persuaded my father to send me abroad for a diploma in hotel management."

After a year in Austria, he was back in India and obtained a position as a management trainee in Delhi with Nirula’s, well known for its ice creams. But Rao never got to work in the ice cream division which was confined to family members; he was in the bakery and bulk kitchen. He enjoyed the experience thoroughly but, after a year, decided to come to Bangalore.

"For two reasons," he says with a grin. "The girl I intended to marry was here (Sheela Rao, veterinarian and one of the founding members of CUPA) and I found Delhi too aggressive. I preferred the easy going nature of Bangalore."

With his stint in the industry, it was but natural for Rao to start a food based venture. He didn’t think too hard about the name either. It originated from the simple fact that the location was at a corner of Residency Road. Corner House would have remained just another small struggling eatery if not for a fateful incident and Rao’s brave decision to alter course. "I remember the day well, August 3rd 1995," he says now with a chuckle though at that time he must have pulled his hair out.

"That was the day all three cooks did not turn up. There was nothing I could serve the customers except ice creams. I decided right away that I would cook whatever raw stock was left and call friends and relatives over in the evening. I was going to wind up my fast food business. Nobody would hold me to ransom anymore. But during the day, I kept an eye on the ice cream sales where the graph kept mounting. This was because many new restaurants had opened up nearby. Only, nobody served desserts. And I realised that there was great opportunity here."

Though he did have some experience in the sector, having set up a Yankee Doodle ice cream parlour on a turnkey basis some years earlier, Rao’s impulsive decision to close the major part of his business brought nothing but flak from well wishers. But Rao was sure; he knew exactly where he wanted to go.

For the first couple of years, Rao bought his ice creams from various suppliers. Then when he started having problems in sourcing due to inconsistent quality, he decided to encourage one of his employees to set up a source and, in 2000, a factory came up on Kanakpura Road. By this time Corner House had become a brand synonymous with ice cream desserts.

From the very beginning, Rao and his team had imaginatively created various dishes from the available flavours, changing and recreating as and when new flavours and ideas came in. He credits much of this creativity to customer feedback, recounting how a medical student from Indore reassembled the existing ingredients in one of their offerings to come up with the now well known Cake Fudge. Corner House’s famous Death By Chocolate, or DBC as it is termed by regulars, is also a customer creation.

Despite its mounting popularity, Corner House would have remained a single outlet ice cream parlour were it not for another incident. Which Rao, in hindsight, calls fortuitous. "My landlady wanted to increase the rent six fold. I was agreeable to a fourfold jump but she was not and took the matter to court. I suddenly realised how precarious my situation was. If I was forced to vacate, I would have no business at all. So I searched around and got a place in Jayanagar." 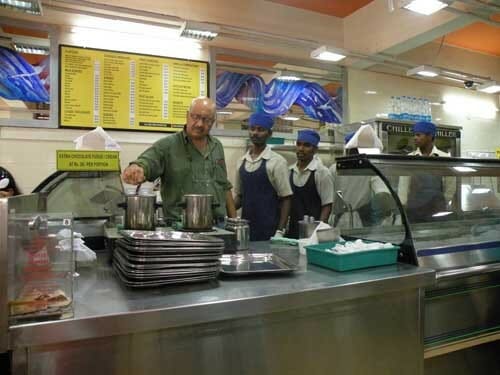 Over the years more shops opened and today there are 14 Corner House outlets in the city as well as one in Mysore. Pic: Theresa Verghese.

It was 1999; the beginning of what would become a major expansion. Over the years more shops opened and today there are 14 Corner House outlets in the city as well as one in Mysore. Meanwhile, the case dragged on for years till Rao finally lost. Last year, he vacated the premises. Though the main outlet now is not a corner area, it is just round the corner from the original one!

Of the total outlets, four are franchises. After a bad experience with his very first franchisee, whose contract has since lapsed, Rao is wary of who he gives franchises to. "For me the quality of the product is paramount. If the franchisee himself is corrupt, others down the line will be too; so what is the customer finally getting? My aim is customer satisfaction."

The customer is truly king here. Having early on experienced the delight of a family when a slice of dropped pizza was replaced, Rao follows the policy of replacement for any such accidents. He attributes his business attitude to his grounded upbringing and the very middle class lifestyle that he says he is happy to lead.

Meeting Rao, with his firm handshake, frank talk and courteous attitude is like connecting to a slice of old Bangalore. Like the brand he created, innovated upon and has sustained, there is an old world charm about the Hot Chocolate Fudge Man.

And a View That Once Was

Deepak Vrajlal sports a broad smile as he talks about his business. After a long hiatus, Lakeview Milk Bar is back where it had been for decades – on MG Road. In the same building, now reconstructed; in a smaller space as compared to earlier times; but with the same loyal clientele who simply cannot think of a Bangalore without Lakeview.

When Vrajlal’s father bought the business in 1948 from Englishman James Meadow Charles, who started it in 1930, he probably would not have thought that he was taking on a legacy that would last for generations. Not just for his family but for the many Bangaloreans who have grown up on Lakeview ice creams. “People keep coming with their children and then their grandchildren,” says Vrajlal. “Recently there was a couple in their 70s who had left Bangalore long ago and gone abroad. Once back in the city, they said they just had to come to Lakeview for ice cream.”

Originally launched as Lakeview Creamery and located close to Ulsoor Lake, from where it got its name, this ice cream joint has been a favoured destination for Bangaloreans. This is the place they come to after a late night eating session. The place is so relaxed that, if you don’t feel like it, you don’t even have to step out of the car. Just place your order and have your ice cream come up to you.

“Everybody has their favourite,” says Vrajlal with an indulgent look. “You cannot make them budge from their Dryfruit or Peach Melba. For chocolate lovers, it’s the Sizzling Brownie.” This despite the fact that there’s a wide variety of ice creams, sundaes and fruit salads to choose from; some of them with rather imaginative names like Merry Widow Special!

So what’s in the offing for this legendary brand that also offers baked goods and Western snacks? Considering the many offers he’s been getting, Vrajlal is thinking of franchising. Not in a big way, just enough to expand slightly. After all, he has to keep a watch on what is being served under the name. As he points out, it is quality that has kept the customers coming. Ever since Lakeview was established 80 years ago, in 1930.