On the busy Ring Road in Kuvempu Nagar (BTM Layout) near the BTM bus terminus, unnoticed by many of us, there is a small temple, dedicated to Karumariamman Amma -a well known goddess in Thiruverkadu, Tamil Nadu, now is in midst of a busy neighbourhood. 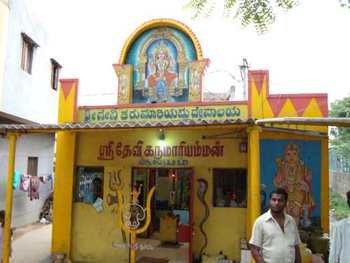 Before the temple was built, there was an ant hill and a serpent, claim the residents of Someshwar Colony. Muniswamy, Ramchandra, Nagaraj and P Shanmugam, all residents of the area took the initiative of constructing the temple. It was completed in the year 1994.

Every year, a five-day Varamaha Lakshmi festival is celebrated with great fervour. The first day is Hasi Karaga, then the goddess is decorated in various Alankaras such as  Benne ( Butter ) Alankara, Arishina Alankara and so on, based on the wishes of the devotees.

On the final day, Huvina Alankara and Karaga are performed. The evening will see events such as konda (walking on fire), music and dance.  Funds are collected from the local MLA and the residents of the area for the Varamaha Lakshmi festival.

P Shanmugam who looks after the temple says, “Generally, people from Tamil Nadu come and have darshan but it is open to all.” The priest of the temple, Sekhar who has been serving there for the past 11 years says, “ I was born to serve (the goddess).” He is originally from Krishnagiri, Tamil Nadu, and he adds, “My family is a traditional purohit family”.

Even though the temple is in the midst of the busy world, Sekhar says a lot of people come for Amman’s blessings. Tuesdays and Fridays are considered auspicious days to visit the temple.   ⊕

About Chetan Boray 14 Articles
The author has not yet added any personal or biographical info to her or his author profile.

Thanks to citizen intervention, BESCOM recently rescinded penalties amounting to nearly Rs 43 lakhs against 400 consumers over a procedural lapse.

L&T South City’s residents have taken serious objection to BDA’s move to build a shopping complex on land whose status they have already challenged in court.

The happy girls of Baale Mane

A home among the lush green ragi fields is the ideal retreat for 60 underprivileged girls, who find a home and future in Baale Mane.