On a hot Saturday in April, BBMP demonstrated its responsive side. Earlier that morning when my husband told me about a dead ox body opposite our building at Benson Town, I thought he was joking.

A little later, I was shocked when I actually noticed the ox lying along the roadside. Brushing aside questions of "Who, why, when and how", I presumed that one of our proactive neighbours would have reported the issue. But when I rang the BBMP’s 24 hour helpline (22221188 and 22660000) around 10.15 am to check, I realised that no complaint had been lodged. 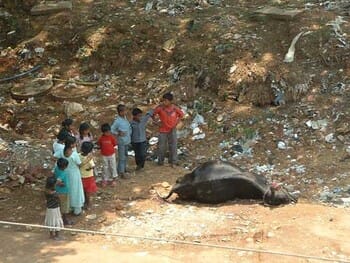 I had called the above phone numbers in December 2009, to enquire about the grievance registration and resolution process end-to-end. However, this was perhaps the first time I lodged a formal complaint. The first number was busy but the second redirected me to an (Interactive Voice Response) IVR which requested me to choose between Kannada and English.

I hesitantly opted for the latter while mentally preparing myself to speak in my not so fluent Kannada. Soon after, an operator named Ramesh greeted me in English in the typical "call centre" fashion and ‘captured’ the necessary details. He also noted my address, mobile phone number, landmark and so on.

Interestingly, Ramesh did not ask for my home land line telephone number as it was visible to him and stated it correctly upon my request. (This is unlike many privatised landline service providers who claim to have this feature even if it rarely works!).

As I waited for Ramesh to provide me a problem reference number, I heard him checking with his colleagues where Benson Town is actually. When I asked him for an estimated response time, he said, "Madam, it should be within half an hour as you have mentioned that it is urgent." He also assured me that I would not have to follow up.

Around 10.25 am, I received an (Short Message Service) SMS text message from a BBMP mobile number specifying the (Service level agreement) SLA as 10.30 am. About 10 minutes later, Manjunath, a BBMP engineer called to understand the issue and for directions to the location and promised to arrive within half an hour.

And then after complete inaction from BBMP until 12.15 pm, a small and almost full garbage truck arrived with seven workers including a supervisor. In the meantime curious children gathered around the animal and tried touching it. A couple of crows perched themselves on the body but did not peck at it furiously. A scooterist passing by who stopped to look at it for a few minutes declared convincingly "Heart attack".

The entire clearing episode lasted over an hour thanks to the BBMP’s initial unplanned approach and the body’s mass. Further, the ox found a kindred spirit in a cow which refused to leave the spot for a few minutes. The ox departed on its final earthly journey at 1.20 pm as the workers shut the truck’s doors. May his soul rest in peace.   ⊕

They were promised some amenities when they bought apartments. But even the land on which amenities were to come up doesn’t belong to the builders. Residents have taken the builders to the court.

For years, citizens have been demanding a foot-over-bridge connecting Yeshwanthpur old railway station with the Metro station nearby. The bridge would reduce the distance between these two points from 2.3 km to 200 m

Minister assures contract workers they will get direct payment and promises to abolish contract system.