Ladies and gentlemen, boys and girls and foodies of all ages – It’s showtime. In the blue corner, priced between Rs 249-299, claiming to offer "old Dilli" cuisine, please welcome More than Paranthas (MTP). Its challenger, in the red corner, with their Set-Menu priced always at Rs 299 and claiming to offer authentic Mughlai cuisine, put your hands together for Umerkot! 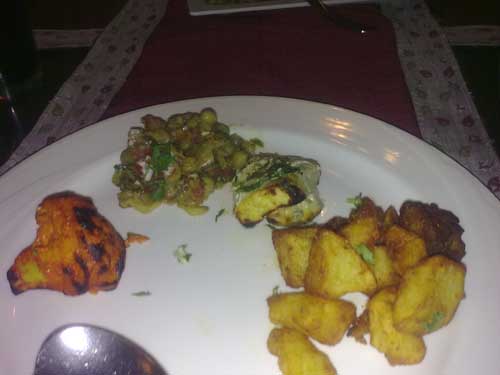 Round 1 – Decor and Decorum

While MTP offers a much better lit and aesthetically pleasing decor, it loses out in terms of customer service which is simply not brisk.

Round 1 is hence declared a tie

Round 2 – One shot of Shorba 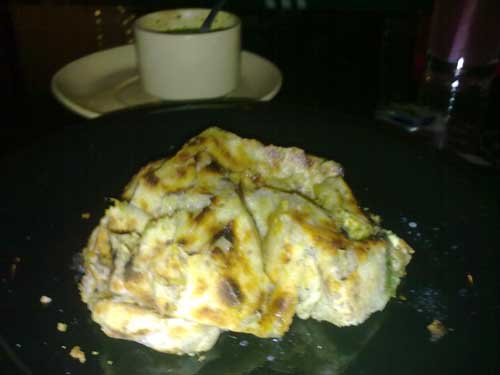 Round 2 goes to Umerkot

Round 3 – Crispy, Crunchy and Chaaty

With both the restaurants cancelling each other out on "the usual" starters made out of paneer, gobi, aloo and the solitary chaat offered, the decider was the MTP’s Bharwan Papad. This vegetable stuffed starter was unanimously voted by my friends as the best starter we’ve eaten in a long time.

Round 3 is edged by MTP.

Round 4 – The Main event

Excellent Paneer based dishes which accompanied crispy but juicy Naans and Butter Rotis was a common feature between both the restaurants. MTP also offers a unique masala filled parantha called Chur Chur Parantha. This was my favourite among the breads. Harry, my good friend and an expert with respect to non-vegetarian cuisine, felt that Umerkot’s Murg Dum Biryani was better than MTP’s Lat Pat Punjabi Biryani. MTP also adds a touch of oriental flavour to its buffet by offering dishes like hot garlic noodles and veg manchurian gravy.

Round 4 was too close to call and is yet again a tie.

Round 5 – The final blow

While Umerkot offered just a couple of sweet dishes, the desserts simply kept coming at MTP – Shahi Tukra, Moong Dal Halwa and much more. The best of them all was the oh-so-soft Gulab Jamun.

Round 5 was comfortably bagged by MTP.

A buffet is often used by restaurants to give their prospective patrons some insight into the variety that is offered by them. Right from start to finish, MTP showed enough variety to suggest that they indeed offer more than just Paranthas. This was the deciding factor in this shootout between Koramangla’s two popular but pricy restaurants.

MTP are hence crowned the champions of the Battle of the Buffet.