He refers to himself as a whistle-blower. At 70, his concern is for social justice "especially when local bodies are perpetrators".

Meet S Vasudeva, a practicing advocate in the Karnataka High Court, who has filed a number of public interest litigations (PIL) on various issues concerning Bengaluru. 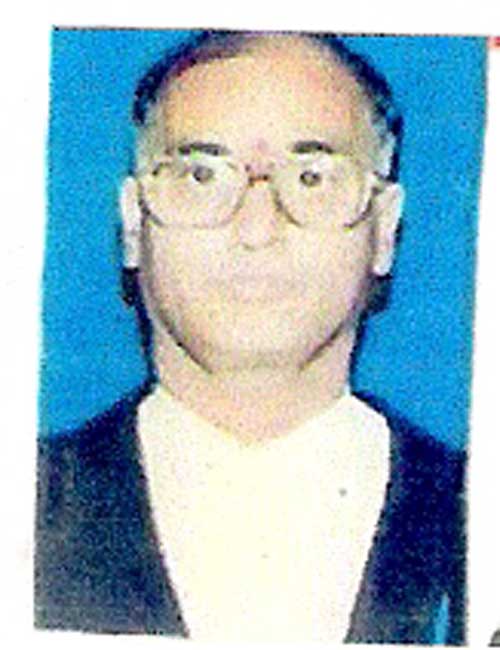 70-year-old S Vasudeva is an advocate with the Karnataka High Court. He has filed over 70 PILs in the city. Pic courtesy: S Vasudeva

"Government is meant for welfare of people. If they fail to provide basic neccessities, then who will?", he asks passionately. It is because of this that he filed a PIL with regard to the allocation of G-category sites to 66 MLAs and MLCs of Bangalore and across the state. G-category refers to BDA sites allotted at the discretion of the chief minister to eminent personalities.

His writ petition resulted in the High Court issuing a notice on February 2nd 2010 to the state government, BDA, Urban Development department and site allottees. Vasudeva says that the respondents are likely to respond within the next two weeks. He says the case itself may take six months or a year to close.

Now here’s how it all started. On February 28th 2009, the Urban Development department wrote to the BDA Commissioner, listing out the 66 MLAs and MLCs who were chosen to be given 50×80 sites and ordered the BDA to do so. The letter says that this allotment is as per Rule 5 of the BDA (Allotment of Sites) Rules, 1984 and the 1997 Revised Guidelines for allotment of stray sites by the BDA.

Vasudeva filed a petition on December 12th 2009, challenging these revised guidelines saying these MLAs are not eminent personalities and are therefore not entitled to receive these sites.

Vasudeva also claims that the former late Chief Minister even tried to buy him off offering him crores of rupees and even an apartment of his own.

The petition says that some of the MLAs have been allotted sites for the second time. Also, as the government is allotting stray sites under G-category, Vasudeva’s petition says that the BDA Act of 1976 does not define ‘stray sites’ and therefore the BDA cannot presume that all residue sites remaining with them are stray and should be disposed off.

Through the petition, Vasudeva challenged Rule 5 of the Site Allotment Rules, 1984 which gives "absolute and unbridled power to the Chief Minister". Vasudeva also points out to the fact that 64 of the sites have been provided only to the ruling party MLAs and MLCs and not for others. He terms the allotment, "arbitrary, discriminatory, illegal and motivated by extraneous consideration".

The writ petition also refers to the two lakh people who have registered their names and deposited money for BDA sites. In spite of this, the BDA found it "convenient to overlook the applicants who are waiting in que (sic) and allotted sites to…current sitting members of the Assembly", says the petition.

"You and I will go pay money and apply for a BDA site. But we won’t get a site. These (politicians) people get so easily. 50X80 sites they are getting for 8 lakhs", Vasudeva explains. He says that the MLAs and MLCs have to pay Rs 8 lakhs deposit for 50×80 sites in the city. Going by market value, these sites could easily be sold for a price of Rs 1 crore and above today.

The petition demands Rule 5 to be struck down because it is against public interest.

One Congress MLA from the city, N L Narendra Babu (Mahalakshmi Layout) has also been allotted a site.

Vasudeva’s petition said that this statement by Yeddyurappa proves that "he is a party to illegalities."

Following this writ petition, the High Court issued a notice to the state government, BDA and the other respondents to submit their statements with regard to the petition.

Citizen Matters spoke to some of the Bangalore MLAs, each of who had their own take on the issue. 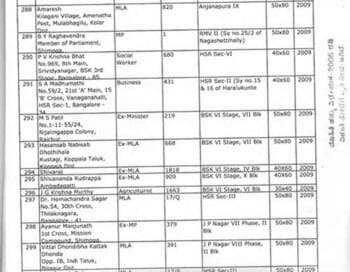 Many MLAs have been allotted BDA sites under G-category. Click on pic to see a scan of a small part of BDA’s site allocation list.

Mahalakshmi layout MLA Narendra Babu (Congress) says that there is nothing wrong in giving sites to MLAs under G-category. He says it becomes a problem when more than one site is given to the same person. "Not everyone of us are born rich. I come from a middle income group family", he says, explaining that it is not incorrect to give these sites as long as the power isn’t misused. Babu gives the example of a former late MLA Lakshman whose wife was left with no source of income or house after his death. "These are the kinds of criteria you need to look at", Babu says.

Malleshwaram MLA Dr C N Ashwath Narayan (BJP) also agrees with Babu saying there’s nothing wrong with allotting these sites under the discretionary quote. Narayan, however, has not decided if he will accept the site. ‘Normally, whenever a site is allotted to MLAs, it’s normal for someone to object", he says, adding that it is common that an MLA receives a BDA site during his career. Narayan further says that if proper housing was provided for all citizens, no one would make an issue of this matter.

Narayan’s colleague, S Muniraju, MLA of Dasarahalli constituency, has a different story to tell. "I have not got any BDA site. I don’t know why my name is there. I never even applied for a site", he claims. Muniraju says that he even wrote to the BDA asking them if he was allotted a site under G-category. "The BDA has told me that I haven’t been allotted a site. I don’t know how my name has come up. I will go to court", he says.

Muniraju line of thinking is also different from the other MLAs. He is quick to say that giving sites to freedom fighters and sportsmen is not in question. On the other hand, "Dr Hemachandra Sagar (BJP MLA from Chickpet) has a lot of land, Dayanandasagar college and all. He has also been allotted a site. They are taking it", he points out sharply.

Muniraju’s starting point is that the Chief Minister has powers. "S M Krishna gave land for his driver. If the Chief Minister didn’t have power then it’s ok", he says. They have been giving these sites from before. Vatal Nagaraj has three, Mallikarjun Kharge has two. I already have land in Bangalore. I don’t require any more land", he adds matter-of-factly.

A trying case for the state government

With over 70 PILs to his credit, 70-year-old Vasudeva’s fight against injustice continues. Given his track record of winning a number of key battles against the state government in the High Court, this case of doling out BDA sites to members of the state legislative assembly and council may prove to be a predicament for the Chief Minister. ⊕

Meet on adolescent education an eye-opener

How must sex education be taught? With World AIDS day coming up on December 1st, a recent workshop held at Ulsoor explored points of view of Bengaluru’s parents, teachers and students.

Elevated roads do not solve the traffic problem – they shift it to another place. The government must decide to move people, not move vehicles, says Sandeep Anirudhan in his letter.