Simply put Urban Commons refers to spaces in a city that a broad spectrum of people use and depend upon. Agara Lake located south east of the city is one such space. Like most other lakes in the city, Agara is an irrigation tank that dates back to the 9th century. Apart from irrigation, and water supply the lake is also home to a wide variety of flora and fauna.

D’Souza’s study is an attempt to understand the effect of urbanisation on what began as a solution to irrigation of agricultural lands in the area. Agara turned out to be the perfect case study because of its transitional phase. The lake is located near the Ring road and the fairly new HSR layout. The establishment of this high-end locality, led to the BDA acquiring the surrounding agricultural land and erecting a fence around the lake.

In 2007, the Lake Development Authority (LDA) came into the picture and the lakes were leased out to a private company called Biota Natura Systems under the controversial Public-private partnership schemes. Outrage at the company’s plans to build an amusement park at the lake and the subsequent Public Interest Litigation (PIL) against LDA’s privatisation schemes resulted in the agreement between the company and LDA falling through. 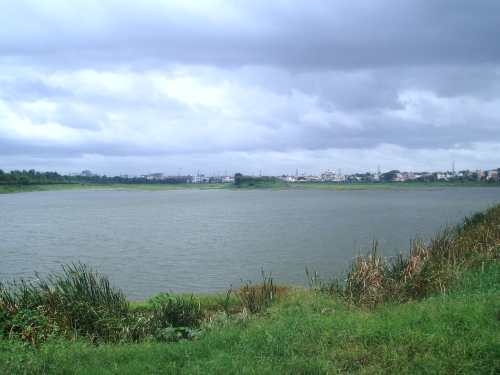 Apart from irrigation, and water supply Agara lake is also home to a wide variety of flora and fauna. Pic: Meera K.

All these events have placed Agara in an interesting position of being partly urbanised but still able to retain some of its original wetland character. This has resulted in the Agara holding on to some of its original users like fishermen and acquiring some new ones like the residents of Koramangala and HSR layout who use the lake for recreational activities. Through a series of interviews with such people, D’Souza attempted to understand the significance of the lake and how this ‘public property’ is viewed.

The lake’s users are broadly classified into two types: those who derive their livelihood from it—sex workers, fishers and fodder collectors—and those who use it for other purposes such as recreation and household activities. Fishing obviously is the most prevalent activity at the lake. Previously fishermen from the Agara village were primary users of the lake but today fishing requires a lease from the Fisheries Department. Depending on its area the lake is leased out to fishing cooperatives for a fee.

While the villagers from Agara seem unable to afford this some fishermen such as a cooperative from KR Market seemed to have leased the lake for a while. However, even these organised groups, often perceived as the legitimate users of the lake, have started to wind up fishing due to insufficient catch. According to one fisherman with a lease, the lake’s water level was insufficient for the fishes. An interesting observation made by the fishermen in this regard was that Agara which was connected to the Madiwala lake upstream and to storm water drains that allowed  rain water to flow into the lake.

But now the connectivity is lost due. Without these sources of water the lake had effectively been cut off and isolated resulting in reduction in the number of fishes.

However D’Souza did find that several of the ‘illegal’ fishermen (those without leases), fishing primarily around the shallow end of the lake were content with their catch. These fishermen mostly from local areas seemed able to negotiate the ‘illegal’ nature of their work with authorities like the local policemen.

The area surrounding the lake provides fodder for livestock. While some people grazed animals at the lake itself, others cut up weeds growing around the lake to take back with them. It is also used by sex workers who solicit customers or bring them here. Mostly transgender, they use the overgrown areas of the park for the privacy and cover it offers.

In spite of all these people making a living from the lake, with the urbanisation of the surrounding areas it appears that Agara is mainly used today for non-livelihood purposes. D’Souza identifies from the interviews six types of users in this category—household, recreational, leisure seekers, religious, inspiration seekers and naturalists. The lake seems to be used by residents from a low-income settlement nearby, for washing clothes and utensils due to the lack of regular water supply. 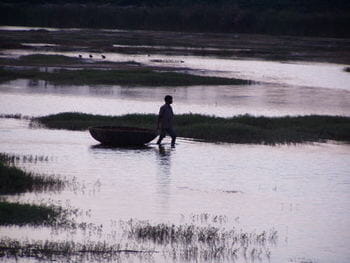 Recreational users mostly seem to comprise of walkers and joggers who use the 3 km path surrounding the lake for physical exercise. Others walk their dogs, swim in the lake or use surrounding spaces such as sloping embankments to sit and relax. A flight of steps leading up to the water provide space for some people to perform rituals. Artists come to the lake seeking inspiration for their work while college students come to the area to date. The park on the northern side of the lake also provides the young people the space to play sports like cricket. Naturalists use the lake mainly for bird watching.

Apart from documenting these patterns of use, the interviews highlight some interesting aspects like competition for the resources of the lake and the conflict it created between different users. For instance naturalists that D’Souza spoke to felt that activities like washing utensils or fishing should be restricted as it affected bird life while residents of nearby low-income settlements seem to have no choice but to use the lake due to irregular water supply. Similarly, traditional fishermen (mainly from the Agara village) are embroiled in an indirect conflict with the regulatory mechanisms of the Fisheries department, leading to several small individual fishermen today indulging in what is considered ‘illegal fishing’.

The study also highlights the fractured relationship of the original users, the residents of Agara village, with the lake due to changes in the city’s landscape. Interviews with the villagers establish the lake’s presence for a long while with some villagers claiming that the lake had been around for ‘hundreds of years’. The lake seems to have been in use until around ten years ago. According to the villagers, Agara primarily provided water for domestic and irrigation purposes and of course been a source of livelihood for fishers in the area.

However, with the development of the area and centralisation of the lake’s management things changed. When the high end HSR layout emerged, the residents of the locality as well as the villagers were supplied water through a Cauvery pipeline. This ended their dependence on the lake for water.

A senior citizen from the village pointed out to the researcher that with construction of the Ring road, the wells in the village that supplied water from the lake had been closed off. Agriculture in the wetlands was stopped and the land around the lake was acquired by BDA and concretised (by erecting fences and building walkways). When fishing was also regulated with licenses that the villagers seem unable to afford the final blow was struck to this once strong relationship. This disconnect means that today villagers of Agara have little influence over the lake.

It is clear what was once a local resource and common property, is today by nature of its physical changes as well as change in users, largely a urban public space. However Agara still meets livelihood needs of some groups of people as well as certain domestic needs, often of people from low income groups. This duality asserts, Rohan D’Souza could indicate that the lake could be an ideal candidate for an alternative management system that allows for it to once again enter public commons. With a little negotiation and debate D’Souza suggests Agara could cater not just to those who depend on it for their survival but also new users, from the rapidly expanding city.     ⊕

Residents whose dogs mess up the pavements and public places, are now warned that they will be fined and penalised. Will there be inspectors standing along all pathways, to keep track and nab the offenders and collect a fine?

Growing community participation in the management of lakes of Bangalore is the best thing happening these days.

Why does garbage seem like an insurmountable problem in Bengaluru? Anuradha T blames BBMP’s negligence on the failure to keep the city clean.