Malleshwaram Circle was a very beautiful junction, where lovely avenues criss-crossed. Huge trees lined up on all the four roads and made this place a literal heaven. A grade separator made its way about five years ago and hundreds of trees were bidden good-bye.

We could not see the sky in those days. But today, people walk under the scorching sun. Many businessmen at the junction, who were running their business for the last 50 to 100 years, have lost their business.

For example, there was this beautiful flower shop which was more than hundred years old. I saw the concept of bouquet launched by this shop for the first time. This was in the 70’s. People zooming in their vehicles to different functions, parties, weddings and funerals would just stop by this shop to pick up flowers. Today, the huge grade-separator has separated the shop from its customers and it is on the verge of closure. So also many other shops at the junction!

However, T Alagiri Swamy is lucky as his shop Bhagyalakshmi Butter and Gulkand Stores is situated on the perpendicular road. He thanks his stars that his business has not been affected.

In fact last year, he was spotted by Big Bazaar, Malleshwaram and offered to run an outlet inside Big Bazaar. Old-timers are very familiar with this small and unassuming stall, which has been there for the last sixty years.

"I don’t know the exact date on which my father Thiruvengadam, a farmer’s son from Coimbatore started this shop. But I definitely know that it is nearly sixty years old. I am 46 years old and I have been coming to this shop since my childhood with my father", says Alagiri.

Originally Thiruvengadam started it as a petty shop selling various items and gulkand and butter were just two of the items. The demand for gulkand kept rising and he introduced the concept of serving gulkand to customers along with fresh butter. Gulkand is known to be a very good healer of mouth ulcers. The demand for this too went up.

After his father’s demise in 1982, Swami, who was studying PUC, took over the shop and he converted it into an exclusive outlet for gulkand. Since then, there has been no looking back. He used his innovative mind and contemporised the delicacy to suit the changing trend. He started serving gulkand with fruit salad, dry fruits, banana, ice-cream, buns and what not.

"My father sold gulkand at 50 to 60 paise in those days and today we serve it at different rates ranging from Rs 12 to Rs 30 per serving. While my father alone managed the business, today I have employed 11 persons",  Swami says.  He adds that two of them man the shop near Malleshwaram Cirlce, three of them the Big Bazaar outlet, while the rest of them manage the factory. "We get nearly 500-600 customers per day at this outlet alone, while we get 200-600 customers (the number is more on week-ends) in our Big Bazaar outlet", he says. He adds that this number is besides the sale of bottled gulkand. His shops sell nearly 50-100 bottles of half kilo each per day, consisting of different varieties like plain, dry-fruit and organic. Besides, nearly 200 bottles of our lotus petal mix are sold per month.

Alagiri is a graduate from KLE College, Rajajinagar and had no second thoughts of his career, because he had regularly helped his father and knew that running that business was his best choice. While one of his brothers is with him in this business, his two other brothers are into transport business. 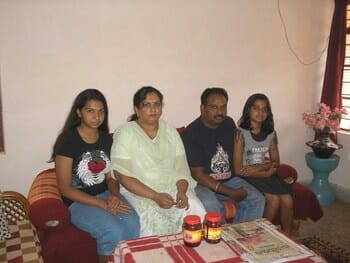 Swami’s wife, Gayathri is also very enthusiastic about this business and takes care of the factory, ‘Bhagyalakshmi Foods’ which is located in Gayathrinagar near Srirampuram. The special variety of roses called ‘panneer roses’ for the business are procured from Ajmer and Hoskote. While the flowers from Ajmer are procured in the dry form, Hoskote flowers are fresh ones.

All the flowers are thoroughly sterilised to remove all toxins. Butter is procured from Oothukuli in Tamilnadu and Nagamangala in Mandya district, Karnataka. Cutting machines are used to cut the petals into tiny pieces, which are then mixed with sugar syrup, essence and permitted preservatives.

"We also prepare Lotus petal mix, which is said to be a very good medicine for improving memory power and purify the blood. We are shortly releasing our new product ‘Bhagyalakshmi Gold’, which will be 100 per cent natural with just sugar, rose and honey. We are also planning to formulate a low calorie gulkand mix for diabetics and seek Central Food Technological Research Institute (CFTRI) approval", says Swami.

The rate of bottled gulkand ranges from Rs 55 to Rs 140 per half-kg bottle. The special quality pet bottles are procured from a factory in Peenya. Gulkand is also sold on wholesale basis to other retailers and shopping complexes. Besides, almost ten previous employees who have been trained here are now independently running their own mobile service businesses at areas such as Jayanagar, Basavangudi and Rajajinagar and they too procure gulkand from Swami.

"Our employees are all very happy and the senior most employee at present is with us for the last twelve years. They get a day’s weekly off", says Swami. Swami has two college-going daughters Sneha and Kavya, who too are very fond and proud of their father’s business. The family now lives in a rented two-bedroom independent house in Nandini Layout.   ⊕

A recent discussion on changing urban landscapes by prominent citizens went beyond the Bangalore City Project into the realm of how to address urban change, especially in the light of the disappearance of public spaces and heritage.

Six-footers who are still tiny