As campaigning for the BBMP elections entered its last phase, six candidates from the Sunkenahalli ward (142) took part in a debate where they shared their plans for the ward and to reach out to the locals on March 25th. 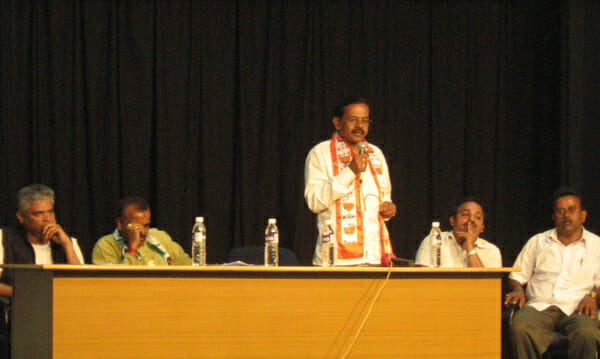 The debate, moderated by Subramunium Vincent editor of Citizen Matters– began with the candidates briefing the audience on their credentials. After which pressing concerns of the people were brought up for discussion. The candidates were asked whether if they, as corporators, would meet with people from all economic backgrounds, once a month, to discuss their problems.

While all the candidates were eager to meet this demand, Harish Gowda, an advocate who is contesting for the first time, said, “The meetings with resident welfare associations and the people from the lower income areas is not necessary because, as a corporator, my work will speak for itself. My duty will be to supervise projects that are being undertaken in the area, I’d rather concentrate on that than wasting my team meeting with people and belonging to ‘groups’.”

This argument was vehemently refuted by other contestants. Prakash Belawadi, a first time contestant, said, "These interaction between the corporator and the citizens are very important especially those with the lower income groups. The upper-middle class can very well function without these interactions but the others, their problems are many in number and they need a hearing.”

S Ramesh, who plans to focus on basic amenities as a corporator, said, “As soon as candidates win, they forget the people and become lazy. Meeting the people is essential so that you stay in touch with their concerns.”

A resident posed a question to the candidates during the debate. Pic: Navya D’Souza.

On the issue of accountability, the contestants were asked whether they were would make public the financial records for the ward. All the candidates’ agreed with S Ramesh, who said, “It is only fair that we make the records public. The people have the right to know!” To this P N Sadashiva, the former corporator for the ward, added, “With the coming of the Right to Information Act it has become easier for the people to access these records. In fact, as a corporator, I saw to that all the tender notifications and the programme of work were posted on the notice boards at the BBMP office,”

But Prakash Belawadi, who as a corporator plans to spend two hours every day addressing the grievances of the people, had a slightly different take on the issues of accountability, “ I agree that financial records must be made available. But I think people are too lazy to demand transparency in government and that should change. There is an absence of a culture of questioning and it is best if the people examine the government with caution.”

Harish Gowda, who wants to work towards providing people with ration cards, said, “It is easy to publish records what we must ascertain is whether good work has been done with the money that has been spent.”

Whether cash compensation must replace TDR was the next point of discussion. S.Ramesh, who plans to revamp the water supply system as a corporator, said, “ TDR has not been implemented well by the current BJP  government. TDR is only for the rich who can afford to build more floors but what about the poor man?”

While acknowledging that the issue was a complex one, Prakash Belawadi said, “There should be an equal loss and equal gain borne by the people. That  is mainly what the scheme lacks, some people seem t o bear the burden of loss of property while others are reaping the benefits of it. And  even cash compensation is not the way to go because when development comes to a place the land value naturally goes up but the compensation given by the government is as per before development so it’s unfair. ”

Prakash Belawdi chose a different take, “There will be no need for road widening if the people are provided with the good public transport facilities. If the number of cars on the road keep increasing then no amount of road widening is going to ease the traffic situation.”

P N Sadashiva, on the other hand, said, “Road widening is needed in Bangalore. But I do not think that licenses for layouts should be given. There are over one-and-a-half lakh apartments lying vacant in the city, I think people should buy them instead of demanding for new layouts.” While Harish Gowda agreed that a solution to the traffic woes was needed, he said, “There should be scientific studies carried out by the government to solve the traffic situation at one go. “

Akrama Sakrama, the scheme that has caused many a trouble during debates ruffled a few feathers here too.  S. Ramesh stated, “ It was H D Deve Gowda who brought this scheme into reality so that the poor would benefit. But the B.J.P government has raised the fines to an extent that poor will not beb able to pay it. I think we should go back to the original plan that was in place.”

To this P N Sadashiva countered, “The fines have not been fixed ads yet so there is no point to blame on the B.J.P. The scheme is still up for debate at the Assembly level so the J D (S) will be able to make their case. The B.J.P government is pushing for the scheme because the fine that is collected can be used for the development of the city and the for the benefit of the poor.”

However, Prakash Belawadi rejected this argument. “The BBMP and the other development boards sanctioned the projects and kept quite when the mistakes were happening. So why should the citizens bear the brunt? Are the political parties who were part of the money-making going to pay fines as well? And if you are so concerned about the poor then let the mistakes be. Why ask them to pay a fine at all?”

Over to the audience

When the floor was opened for questions from the audience, the resident of the locality seemed to have a lot of questions. Koteshwara Suryanarayan, a writer and philosopher who happens to reside in the area, bombarded the candidates with a series of questions. Suryanarayan wanted to know what was being done for the vendors at Gandhi Bazaar who have come to crowd the pavements making it impossible for the residents to walk about. He also asked the candidates on what they planned to do about the complex in the area that has been abandoned after initial development.

Suryanaryan demanded that basic amenities and toilet facilities be introduced in the area especially for the women. P N Sadashiva ,in reply, said, “This problem with the vendors has been going on for years now. When I was in office, I had built temporary shelters for the vendors but this only worked for a few days as the number of vendors keeps increasing. On the issue of the under-developed complex, the government has sanctioned a parking lot project in that space. So if I am voted I will make sure that the project is completed.”

S Ramesh, “All the problems put forth by Suryanarayan are problems that can be solved easily. I think the incompetence of the B.J.P government should be blamed for these problems. If I become the corporator, I will see to that these problems are solved within a month.”

But P N Sadashiva disagreed, “The people will only be spending their time electing people! I agree that ward committees but electing the representatives is a tedious and unnecessary process.”

Furore over the name game

It was, however, the name of the ward that caused uproar among the residents. N Narsimiah, a senior citizen from the area, expressed his disappointed that none of the political were able to save the ward from being renamed to Sukenahalli from Kempegowdanagar during the bifurcation process. Prakash Belwadi blamed this on the political parties, “Delimitation is process that has to be undertaken by private bodies that can go about the process in a scientific manner. Political parties who usually tend to this process do not adhere to rules.”

As the furore mounted among the sections of the audience who blamed each other for the name change, political leaders on the dais did not spare each other as well. S Ramesh asserted, “ The process of carving out the wards, by the BJP, has taken place according to the voting belts and not according to the scientific standards!” To which, P.N Sadashiva retorted, “When the JD(S) was in power, 100 wards were carved out. Did they adhere to all the rules then?”

After calm was restored, the debate ended on the note that all candidates would focus on environment issues in the coming term.   ⊕

About Navya D'Souza 8 Articles
The author has not yet added any personal or biographical info to her or his author profile.

BBMP, BDA, BESCOM, BWSSB, and other organisations should stop the practice of accepting deposits and payments from developers on behalf of home owners. Instead, they should set up a system by which the home owners

The state government released the wards reservation list for city council seats on 23 February. The last date for sending objections is 2 March 2010.