It is not uncommon that money is doled out in thousands or even lakhs during an election. The BBMP council elections are no different. Just as voters are wooed by candidates, the media aren’t spared either. Citizen Matters experienced this first-hand during the last few days with candidates from three mainstream political parties offering money to be written about.

At the time of interviewing a candidate, one of the first questions you are asked as a reporter is, "How much do you charge?" or "Do we have to pay for this interview?" When one replies in the negative, it would be an understatement to say that the look on the face of the candidate/party worker/campaigner is that of shock. 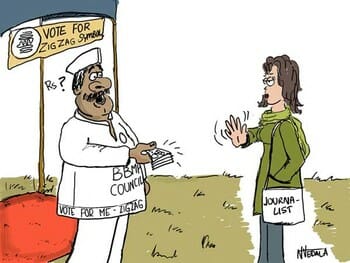 Take the case of a candidate contesting from JP Nagar (Ward 177). This first-time candidate was soft-spoken and explained at length about his two decade association with his party.

Just as I was about to leave, satisfied with the interview, one of his aides walked up to me and asked if I needed to be dropped off anywhere. I pointed to my two-wheeler and thanked him for the offer. As he continued to speak in hushed tones, I realised he was trying to slip me a bunch of 100 rupees notes neatly folded in his palm. "Nimma expenditurege, madam", he said sheepishly.

I maintained my calm and refused to take the money from him. I tried explaining to him that Citizen Matters is a news magazine and that we do independent journalism which does not include paid news. He continued to try giving me the money, insisting quietly that I take it. I repeated myself, saying I was only doing my job and cannot accept any money from him.

He finally got the point and backed off, apologetically saying, "Thappagi anko bedi", meaning "Do not take it the wrong way". I smiled, more embarrassed than he was for having been a part of this little scene.

As I gathered my thoughts about what just happened, little did I realize that there was more in store. Less than an hour later, I was again offered money by a party candidate contesting from the same ward, JP Nagar.

The interview with this gentleman also went off quite well. He introduced me to his family, all of who were courteous and hospitable as I sat in their home, speaking to the politician in the family.

Again, as I prepared to leave, he made the move. But he wasn’t as discreet as the previous candidate. Standing on the road, with no one near us, he pulled out wads of 500 rupees notes from his pocket and asked me, "Hana yenadaru kodabeka?" I just said no and left the place.

These are just two examples of what is a larger problem in not only the city’s political circles but also in the very functioning of certain media organizations. Most do not even think there is anything wrong in paying a news publication to write about them. That’s how rampant it is.

A supporter of an independent candidate recently asked me, "Do you not take any money to write about the candidate?" When I replied in the negative, he asked, "O, are you a social worker then?" This inspite of explaining to him that Citizen Matters is a regular news magazine. Even as I explained to him that it is not the business of any news publication to accept any kind of benefit for writing about a particular person, group or organization, the supporter looked at me in shock. I went on to tell him that we are all paid employees with our respective companies but he didn’t seem to be able to connect the dots. He asked me, "How do you make money then?" "Advertisements, of course", I said.

I do not blame this particular supporter for the questions he asked. That’s the impression that many people have, on how the media works.

A similar incident occurred with a party candidate contesting from Sarakki (Ward 178). After the interview, the candidate’s spouse and campaign coordinator repeatedly asked me if they need to pay me for the interview. They went on to add, laughing all the while, that they are ready to pay money even if we don’t ask for it. The two of them gave me a copy of a local Kannada publication in which there were several reports, profiling some of the candidates. They told me that they had paid for a report on their party candidate on the front page.

Again, as I tried to explain the whole ‘independent journalism’ bit, it seemed to fall on deaf ears. They continued to insist that I print their candidate’s interview on the first page of Citizen Matters‘ upcoming print edition on March 27th.

And then there were those who didn’t make an outright offer to pay but enquired if they need to give any money for the interview.

These are but a few cases where money has been offered. Across 198 wards, with a minimum of three candidates in each ward, it is a lot of math to even fathom the amount of money that could have possibly exchanged several hands. ⊕

Is the clinic you visit registered?

Doctors are not allowed to run clinics without registration. But the clinics in the city continue to flout this norm.

Please ensure peaceful life for us, Worshipful Mayor of Bangalore!

A senior citizen has some requests to the newly elected mayor of Bangalore. Read on to know more!

A resident of Manjunatha Layout writes a letter to the city officials about the pathetic condition of the public amenities in the area, after calls to the local corporator failed to yield any results.