A common scene from Hindi movies is where the hero comes in as the good man in power (often as police) and throws out all the culprits. This arose in real life last weekend (May 17) when the Bangalore Developent Authority (BDA) Commissioner H Siddaiah threw out a doctor practicing for three months in a shop in the BDA Shopping Complex (commonly known as the ‘BDA complex’) on the Inner Ring Road, Koramangala.

The shop that was closed; signboard on the right. Pic: Supriya Khandekar.

Dr Jalal Farooqui was termed an encroacher by the BDA as he had no papers and was not paying any rent. Officers took down his banner and ordered him out.

Farooqui’s case was brought to light by Dr M S Khan, MBBS, who is practicing in the same complex, in a different shop no.22A for the last 10 years. Khan is the lessee of that shop and has been paying rent regularly. This unwanted encroachment was also hampering his business, Khan said.

The scene unfolded during a public meeting the new BDA Commissioner H Siddaiah was holding with the citizens, in the Koramangala BDA Complex. The meeting was organised by Koramangala Residents Forum. Police Inspector Sriram Reddy, Engineering Officer Nanjundappa and four more officers (not introduced) accompanied Siddaihah. Officials appeared to be jotting down each and every point raised. There were about 50 citizens present and most of them came with grievances.

The main issues that came up were about maintenance of public toilets in the complex, and providing water and working taps in them. Some citizens raised the question of improper parking in Koramangala leading to blocking of the lanes. The lane right behind the BDA complex itself was pointed out as an example.

Along with that maintenance of BDA parks was also raised by a lot of people. One of them was about an area in 1st Cross, Koramangala that was allotted for a park but is now used for throwing garbage and people sit there creating nuisance. BDA complexes themselves have small parks inside that are often ill-maintained and abused by shoppers throwing waste as well. (Even when the city’s parks largely come under the BBMP jurisdiction, the parks in the BDA Complexes come under BDA jurisdiction.) 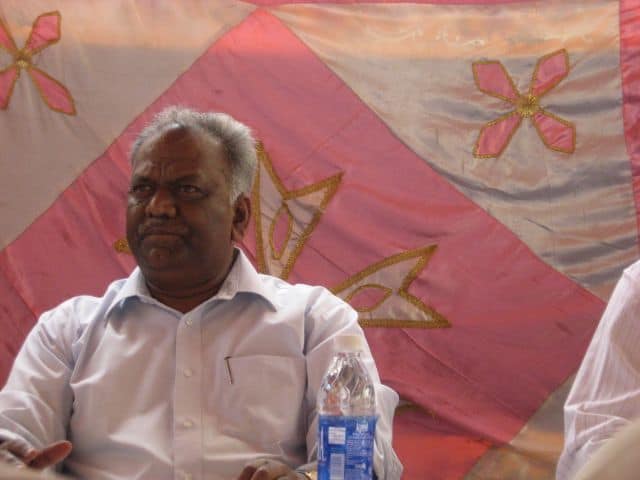 Commissioner Siddaiah was open to questions and attempted answers to most of them. He promised that in the coming 15 days the problems of public toilets and open electric wirings would be solved. He also said that the BDA has appointed a special Engineering officer, Nanjundappa, to take care of the park maintenance and other similar issues. He said these projects will be "taken up immediately".

On the issue of land encroachment and shop encroachment, Siddaiah appeared to be ready to promise high. "Ruthless action will be taken against unauthorised shops and land encroachers while there will be regular checking for the same," he said.

Explaining the reason for such public meetings he said, "Instead of people coming to BDA with complaints I want to conduct similar meeting in all parts of the city once every fortnight. We know that citizens are facing a lot of problems and they have lot of complaints against us." The BDA is planning to set up separate cell to monitor all the pending court cases as well, according to Siddaiah.

Soon after the meeting was over the commissioner went on a round to places that had problems like the encroached areas, improper toilets, and parks.

K Umeshwara, President, Koramangala Residents Forum said that this was a move to make sure the complaints reach the right person. He also said that all these complaints will be further followed up by the forum.

Amidst the promises and solutions to the problems, citizens in attendance seemed skeptical. There was satisfaction that they got the opportunity to put forth their problems directly to the BDA commissioner, but execution remains an open question.

At the May 17 public meeting, because it appeared that Dr Jalal Farooqui did not dispute the charges about his medical qualifications or did not clearly respond on that question, Citizen Matters, the New Indian Express and the BDA concluded he did not have qualifications. The BDA also stated its intent to file a complaint with the police against him, which it did not. Subsequent to the publication of the article, Dr Farooqui approached Citizen Matters and established his credentials. Therefore Citizen Matters is retracting the statement from the story where he was called ‘a quack’, and also the statement regarding a criminal complaint against him, with due apologies to Dr Farooqui. (Citizen Matters, 11 July 2008)

COVID deaths increase since June, confusion about online classes continue, NLSIU alumni arrange flight for 26 migrant workers – read more on news from the city this week, in our roundup.

Akshayanagar Layout near Bannerghatta Road sees a fair amount of traffic. However, the current infrastructure is not only inadequate, but also unsafe for commuters. Are the authorities listening?