"The National Seminar on Urban Growth of Bangalore with special reference to Bangalore Cantonment (1809-2009)" was held at Christ University from February 18th to 20th. This seminar was organised by the department of History, Christ University, Bangalore along with the Indian Council for Historic Research (ICHR), New Delhi. There was also a photography exhibition that featured numerous archival photographs of buildings of Cantonment.

Swati Ramanathan, co-founder of Janaagraha, in her inaugural speech spoke of the how effective urban planning and urban governance can work together to provide a better city administration system. She also spoke of the need to provide new institutional structures for providing citizen centric growth and motivated the audience to actively participate in the various initiatives which strengthen citizenship.

The key note address ws delivered by Dr Solomon Benjamin, Associate Professor, National Institute of Advanced Studies (NIAS). He spoke critically of the present idea of urban planning which "aimed at turning Bangalore into a Singapore". He explained that the city’s development was working in a manner that was not in favour of the poor and a majority of citizens as only 1/6th of the city infrastructure is common to 2/3rd of the population.

Dr Sashi Sivaramkrishna, author, explained on how Bangalore, in the pre-cantonment era, was actually devoid of much of the greenery cover which it has today. According to B L Rice’s Revised Gazetteer of 1897, the two major reason for greening Bangalore in 19th century was the demand for fuel and preference for ornamental trees.

The session "Seeds of Urbanisation" was chaired by Prof M J Vinod, from department of Political Science, Bangalore University. Dr K S Mathew, Honorory Director of Institute for Research in Social Sciences and Humanities (IRISH) provided a general theoretical perspective of the concept of urbanisation. Christ University student Mathew Idiculla analyzed how decentralised urban governance has evolved in Bangalore over the years.

In the second session, Historian Janaki Nair’s paper "Cantonment and its imaginary boundaries" prepared for the seminar, was read out in her absence. Dr C Nanjudaiah spoke on how Bangalore’s farm economy was destroyed by urbanisation resulting in the loss of the farmers’ land to accommodate real estate demands. Dr Gayathri Devi spoke of the contribution of various women in the city over the years, right from Kempe Gowda’s daughter-in-law who is supposed to have sacrificed her life so that the city could be saved! 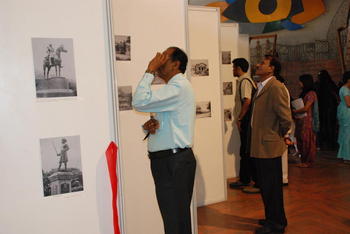 Heritage expert Suresh Moona clarified the common misconception that the name Bengaluru was derived from "Benda Kalooru", arising out of the story of a woman serving Kempegowda with boiled beans; he enlightened the audience on how the inscription "Bengaluru" was found in a temple in Begur as old as 890 AD. In his paper, he discussed the various builders of Bangalore- the historic personalities, the lesser known builders and the modern builders.

Janet Prem explained the various geographical challenges that lead to urban growth. She mentioned instances like the plague caused people to move out of the crowded place resulting in expansion of the city.

Dr Harish G B spoke about Kannada literary movements and associations in Bangalore. M S Puttana, V Sitaramiah, G P Rajaratnam, D V Gundappa are among the many Kannada writers who made the city their base.

Day two of the seminar started with a much appreciated theatre presentation by Prakash Belawadi and team. They showcased the history of Bangalore of the past 1000 years by enacting and narrating the various defining moments in the history of the city right from the day the inscription of Bengaluru appeared and Kempegowda’s contribution till Bangalore in the independent era. 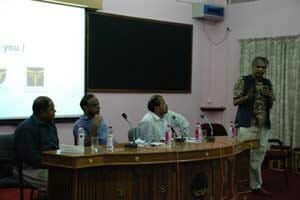 The next session discussing the city’s cultural identities, chaired by Prof. Krishnaswamy, Dean of Social Sciences, Christ University, began. Theatre persons Aliyeh Rizwi and Priyalakshmi Rao’s paper discussed the growth of English theatre in Bangalore, particularly the contribution of the Bangalore Little Theatre in developing a theater culture in Bangalore. Film writer Manu Chakaravarthy spoke of how Kannada cinema has showcased Bangalore over the years. Music composer-lyricist Hamsalekha, discussed how music has evolved in Bangalore over the last 200 years and how western music, made popular with the presence of the British cantonment had an influence even in Kannada music.

Prof. Narendra Pani of NIAS, spoke of how an urban culture, particular to Bangalore Cantonment, evolved over the years and eventually died in the later part of Independent India. Dr S P Vagishwari, Head, History Department, Christ University spoke on spatial identities by illustrating the evolution of Bangalore seen through the revivalism of architectural styles in projecting various images of Bangalore.

The fourth session of the seminar titled "Bangalore As and Is" chaired by Dr P M Mathew, professor of economics, Christ University, looked at the various agencies that made Bangalore the city that it is today.

Prof. S Ranganathan spoke about the Indian Institute of Science, founded by J N Tata. He recounted how Tata asked Vivekananda to head IISc. Had Vivekananda accepted, his life might have taken a very different path!

Xavier Louis and Fr Dr Jose C C looked at how education has evolved in Bangalore and highlighted the contribution of Christian Educational Institutions. They explained how St John‘s School was established in 1854 to solve the social crisis of Anglo-Indians having no entry to schools in the cantonment.

Arun Pai of Bangalore Walks said Bangalore holds an important position in the international imagination and it is critical to promote tourism today. Art historian Dr Annapurna Garimella looked at Bangalore as a "city of God" when explaining how religion has had various forms of representation in the city. Writer and journalist Mala Kumar talked about print media’s role in the city. Dr Usha R Vijayalakshmi’s paper on the role of medieval Tamil chieftains and Gopalakrishna G Hegde’s paper on the contribution of sportspersons were read out in their absence.

On Saturday, the last technical session of the seminar, was on the economies and diseconomies of Bangalore, chaired by Prof. Gerad Rasendran from Department of Economics, Christ University. Dr  Meenakshi Rajeev of ISEC spoke on the impact of the IT industry in Bangalore.

Helen Kennedy and Soosamma Mathews’ paper was on the ecological impact of urbanisation on water bodies like the Bellandur Lake. Prof. P U Antony spoke of biodiversity conservation, the long birding culture in the city and the how bird watching can play a strong role in urban conservation. Dr K S Vijayalakshmi analysed how globalisation and industrialisation has influenced the growth pattern of the city.

The seminar was concluded by a valedictory ceremony  presided over by Fr Dr Thomas C. Mathew, Vice Chancellor of Christ University with  Prof. R S Deshpande, Director, Institute for Social and Economic Change as the chief guest.    ⊕

About Mathew Prasad Idiculla 5 Articles
The author has not yet added any personal or biographical info to her or his author profile.

Bangalore gets together for ‘clean-up’ fest

A unique week-long expo aims to bring together stakeholders from all platforms to initiate an effective dialogue on how to optimally address Bangalore’s waste problem.

Are we on the right path, I wondered as I saw this scene in Lalbagh Botanical Gardens.