Whitefield – what kind of images would this name evoke? most likely IT – a glass and steel building, the Technology Park or maybe even the Sai Baba Ashram, anything but a village. Well, Whitefield or rather the old settlement of that name certainly qualifies as a village and a lost one at that.

I first visited the old settlement more than a year ago in connection with another research project and was fascinated by its circular planning and wished to know more about its history. My starting point was of course, Lewis Rice’s 1887 Mysore Gazette. In it he describes Whitefield as, ‘the principal of the Eurasian and Anglo-Indian settlements in the east of Bangalore taluq’, named after D S White…‘it is 2 miles south of the railway station of the same name and 12 miles east of Bangalore’. I pursued my interest a bit further and finally with the aid of Indian National Trust For Art and Cultural Heritage (INTACH) the first phase of my research into tracing the origin and evolution of the settlement is nearly complete. 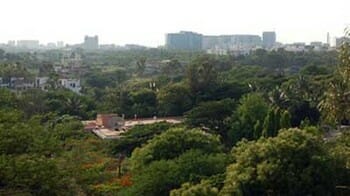 The view of Whitefield from Kaolin Hill, with new high rise buildings in the distance. Pic: Meera K

Whitefield’s history goes back to 1882 when David Emmanuel Starkenburgh White decided to set up ‘a self sufficient Anglo-Indian village, one where everyone would work towards the common good and no man would own property. White, himself an Anglo-Indian, was founder and first president of the Anglo-Indian Association of Madras and instrumental in setting up the Coorg and Mysore branch. This branch petitioned the Government on behalf of the Association for land and was granted nearly 4000 acres of it by the Maharaja of Mysore on ‘very favourable terms’! White’s vision was that the settlers would take to agriculture and gradually develop into a community of self sustaining farmers.

Ten years after its establishment, the 1897 edition of the Gazette states that, ‘as of 1889 the settlement had 25 families of which 6 were non-resident, numbered 115 people in total, 12 cottages built on the village site and 14 farmhouses built on the surrounding land. It mentions ‘a Roman Catholic Chapel and parsonage, a Protestant Church and parsonage under construction, a school with 31 pupils with residence for the Head-master and wife, who assisted him in the teaching’.

So did the idea of a farming village succeed? There appears to have been doubts about this even way back then. At the least, did any physical remains of the village survive? Yes and no, but first, the route to get us to the place. When I visit the settlement, I prefer to drive past International Tech Park, Bangalore (ITPB), take a right turn at Hope Farm junction, go past the Coffee Day and turn right onto the road opposite the Reliance Fresh outlet and there you are! Why this route, well, the stretch from Hope Farm to the settlement was also the historical route when you could ‘arrange for a bullock cart or tonga for 8 annas to get you to the settlement from the railway station of the same name’. In the late 1800s you had to write to Rose White to make arrangements for the same but today I guess you can make it on your own steam.

Further, you would be following the footsteps of a number of historical visitors including Lord Connemara, who visited the place in 1890, when he was the Governor of Madras. It is written that he rode on horseback and stopped at the pass between Kaolin Hill on the right and Hamilton Hill on the left to get his first view of the settlement in the valley below. Kaolin Hill still survives as part of the Roman Catholic Church property, housing the Stations of the Cross, while its opposite number has been cut up for some development (probably apartments). 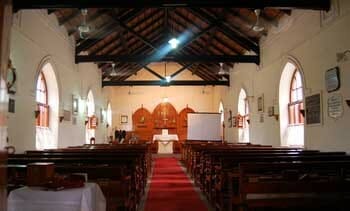 Moving on, the road you turn onto abuts the Memorial Church property – the original Protestant Church, which is still pretty much as it was originally. The road leads to a central circular open area, currently sub-divided into a park and a playground. This central area was the original ‘village green’ with the village pond to one side, which was filled up sometime in the early 2000’s and replaced with a concrete ornamental fountain! Thus regularly flooding all the houses on the low lying side of the settlement, where earlier all the storm water was diverted into the pond in a planned manner. Margaret Lunel, a long time resident, remembers dangling her feet in the muddy water of the pond while sitting on a tree branch that spread right across it. The pond held other memories too and briefly the Memorial Church organ! But that’s another story.

J E Giddens, probably one of the oldest residents, who has been here since the 1930s, remembers that the central ‘village green’ was overgrown with lantanas and jackals and hyenas would roam through it, where kids now play cricket.

As you walk along the Inner Circle road you would be struck by the contrasting picture it presents. To one side most of the old bungalows have been knocked down, the plots sub-divided and apartment blocks towering well above the treeline have come up. While, further along the same stretch you could still imagine yourself in the past as tall mature trees continue to shade the avenue and the large plots with their bungalows set right back. These bungalows are generally characterised by their symmetry, a driveway leading to a covered porch, verandah and living areas beyond, all roofed with Mangalore tiles on timber trusses.

However, few of these bungalows remain and the ones that do have generally been altered one way or another. White, visiting today would not be able to recognise the place. In a little more than one hundred years his Utopia – a self sufficient village has transformed into an upmarket suburb of the city, one that generally does not recognise the existence of this unique enclave – the price of ill planned urbanisation. Thankfully, memories remain unaltered and some very long ones abound in the settlement, each linked to an interesting anecdote.

Paul D Souza, who lives in one of the few remaining bungalows, swears the tree stump in his garden was the one Winston Churchill used to tether his horse when he came to the Inn in Whitefield to court Rose Hamilton, the Inn Keeper’s daughter! (A telephone pole fell on the tree stump and brought it down. Paul rescued the stump from the Inn garden before it became firewood. The Inn still stands). 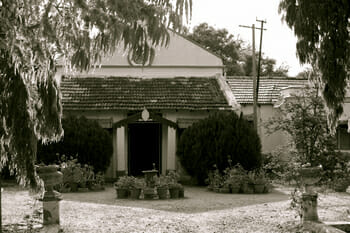 One of the residences, which was once Waverly Inn, where Winston Churchill stayed. Pic: Meera K.

Further, close to the RC Church where now stand villas, once stood some rocks with the initials WC and RH carved within a heart! These rocks were blasted to make way for the villas.

Whether you believe these stories of the intangible heritage of Whitefield, the stories that are related by people with the ability to transport you back in time.

Development is inevitable especially in a locality like Whitefield with its present day ‘desirable tag’.  So should we be happy to just live with these memories or should we make some efforts to retain the last vestiges of tangible heritage as well?

However, as long as legislation does not exist to protect heritage, tangible or otherwise, coupled with present day demand for rapid urbanisation and lack of public cooperation, you will only be left with stories, which again will only remain as long as the story teller.  ⊕

Guidelines for calculating property tax for apartments, with an enclosed spreadsheet tool.

A Bengaluru cop who loves animals

RJ Priyanka speaks with Head Constable of Bangalore City, Suresh AC, about caring for the birds and animals with and around us

Toasted as monument to Bengaluru having become part of a clutch of modern cities with swanky rapid transport, Namma Metro has sunk to a low. Will BMRCL act?