It was a much awaited event for all the climbers in and around Bengaluru. Some participants even travelled from other cities to attend the Rock Climbing fest organised at Turahalli on February 21st, 2010.

Turahalli hillock is a place with lot of boulders and wildlife just off Kanakapura road and around 8 kilo-meters from Banashankari Temple in Bangalore South. I had visited Turahalli couple of times before along with my climber friends, but I had not tried much of the climbing at Turahalli. 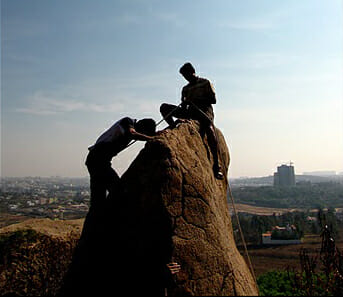 The whole effort was to promote the sport and make more number of people joining the climbing community. Pic: Srikanth Parthasarathy

I was excited as soon as I heard from my friend Raveendra Bhat that he  was planning to organise the climbing fest. He and his climbing group of around 30 members have been organising this event every year since three years. This was the third consecutive year and it’s the time when all the rock climbers get together at Turahalli to celebrate the place that has been fuelling their dreams as climbers. We can call it a climber’s ritual or a pilgrimage. Also this was not a commercial activity; it was a free entry and participation was open for all.

The event details were buzzed on many online sources such as Facebook, Twitter and some blogs. The whole effort was to promote the sport and make more number of people joining the climbing community. It has been the practicing ground for the rock climbers in and around Bangalore for many decades. While Turahalli serves as the boulders’ paradise, it is also under threat.

Save Turahalli initiative launched about 6 years back by a group of climbers who visits Turahalli regularly is to stop any activity which threatens the preservation of this area.

As planned, the event started at 7.30 am on the sunny Sunday morning. I could see around 100 climbers with their crashpads and climbing shoes gearing up to rock the boulders. Like me, there were a lot of beginners who had come. Also many of the climbers were present along with their families. There were many kids as well. By 8 am most of us were waiting to see the formal inauguration of the fest.

Raveendra Bhat, elite climber who is into the climbing sport since 10 years, gave the introductory remarks and addressed the climbing community. For those who were new to Turahalli, he explained about the place, and also spoke a few words on the importance of the climbing fest. After the most important speech on safety, he divided the community into different groups depending on their knowledge about Rock Climbing. Few of the elite climbers of his group were assigned as the team leaders who would be handling the different groups. He also laid out the complete plan for the celebration day. The day started with climbing activities; after that cleaning Turahalli; and refreshments to end the event.

Since I considered myself a beginner, I joined the beginner group headed by Naveen Tater. He started our climbing session by teaching us about ropes, knots and safety. He taught us how to tie a bowline knot and then how to make ourselves comfortable with the rope tying to our waist. The experts have named each and every rock of Turahalli in their own naming style depending on the variety and the routes in the rock. Since we were all beginners, we were at the nursery rock. He demonstrated the climbing first and then demonstrated the belaying activity. Climbing nursery rock was a cake walk for Tater. I guess he can climb that even in his dreams, even while sleeping.

Tater started off by posing a question to us while demonstrating the climb. He asked, "What is more important for climbing? Showing his hands and legs" some started answering "Legs are more important" and some saying "hands". He smiled at us and said "it’s your mind; It’s the mind that gives enough strength and stability for your climb". That made all of us to gain more confidence. He made us climb one after the other. It was an easy climb for me as well given the fact that I had climbed earlier at a few places; but not at Turahalli. All of us, including the kids in our group enjoyed the climbing. By the time all of us completed out turns, there was a call from Ravee to assemble at the temple and start with the cleaning activity. 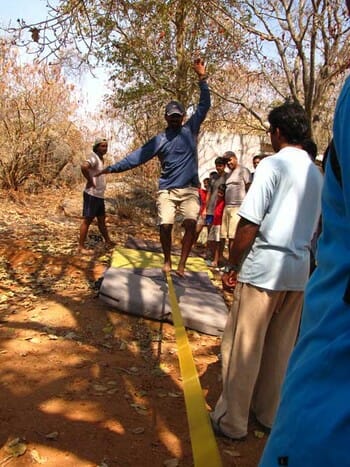 Because of the Shani Mahatma Temple at the Turahalli peak, many people visit this place regularly as a result the place was strewm with discarded materials. Hence, it was a good occasion for us to clean Turahalli and contribute to the beautification of Turahalli.

The activity took about 30-45 minutes and most of us by then were tired. But, to our delight, we saw watermelons, heap of bananas and cucumbers being served by the group. All of us rushed to the place and enjoyed eating them. Watermelons were so good that even the boulders of Turahalli turned red looking at them.

While we were eating, some of the group members had started an interesting activity of Slackline. Slacklining is a balance sport which uses nylon webbing stretched tight between two anchor points. It is almost like walking on the rope. Most of us saw this for the first time in real. Many tried walking over the Slackline but could not succeed.  Pranesh, an elite climber, walked over it like a cake walk. He could even dance over it and entertain us. I could only watch it and click some photographs.

It was almost 11.30 am and all of us were done with almost all the events planned. So it was the Kodak moment to end the day. There were atleast (as per my count) 12 cameras given to one person to click a group photograph. All of us had to sit on the hot granite steps in front of the temple to pose for the camera. You can imagine what would’ve happened to all of us sitting on the hot oven until all the cameras clicked at us atleast once.

Well, I felt very good as I started to move. A great day to celebrate climbing, cleaning up Turahalli, meeting great climbers, interacting with new people. I wish it continues to happen every year and more. I turned on the laptop in the evening, logged onto the facebook, before even I updated my status, I saw Bhat’s status message that read as: "One of the best Sunday mornings at Turahalli. Big thumbs up to all the awesome folks who made it to Turahalli and made it possible."   ⊕

About Srikanth Parthasarathy 7 Articles
The author has not yet added any personal or biographical info to her or his author profile.

Pedestrians at the mercy of railway authorities

Trains parked right in the middle of the closed railway gate makes it difficult for the pedestrians to cross over to the other side. The gates have been closed temporarily due to the Whitefield overbridge construction.

A recent discussion on changing urban landscapes by prominent citizens went beyond the Bangalore City Project into the realm of how to address urban change, especially in the light of the disappearance of public spaces and heritage.