The seminar was conducted by Amit Bhalla from Los Angeles, who has been training at the Beverly Hills, Jiu Jitsu Club. The two-day seminar, conducted on the 6th and 7th of February covered various self-defence situations and number of ground fighting techniques and principles. Brazilian Jiu Jitsu, is among the popular fighting techniques found in the Mixed Martial Arts scene.

Brazilian Jiu Jitsu promotes the principle that a smaller, weaker person can successfully defend himself/herself against a bigger, stronger assailant using leverage and proper technique; most notably, by applying joint locks and chokeholds to defeat the other person. Brazilian Jiu Jitsu or more popularly known as BJJ was popularised by the Gracie family, who are considered to be the pioneers of the art. 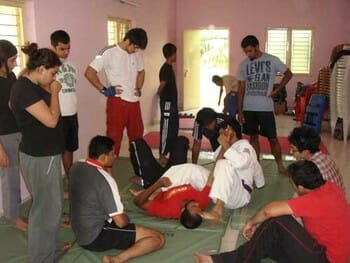 "When I started Brazilian Jiu Jitsu in 2002 when I was 17 years old, I was very skinny and weak, a regular kid who even had Asthma. I got interested in BJJ, by seeing how effective it was on the street, in any real self-defence situation. When I was 13-14 years old, I would watch all my friends who were possibly as skinny as me head out to BJJ class, and by the time they were 17-18 years old they were good fighers, they had amazing confidence and could tackle even bigger guys on the streets. Their fearlessness was something that inspired me totally," says Bhalla.

Brazilian Jiu Jitsu is relatively new in India, Ashwin Mohan, the proprietor of Independent Shootfighters Inc and organiser of the BJJ seminar, believes that is important that one learns ground fighting styles and various types of joint-locks and submissions. "Most fights end up on the ground, once the strikes are traded, you are thrown to the ground, especially in case of women. So it is very important that one learns to deal such situations and turn it to their advantage. BJJ helps you remain calm, cool, and take a seemingly adverse situation into your benefit," says Mohan.

The seminar covered various street self-defence situations, take downs, ground fighting, strikes from the ground in different positions. The goal is to deflect the basic strikes and dominate one’s attacker from the ground. In Jiu Jitsu, one does not use any force, in fact, you take what is given to you, use the person’s force and energies against them.

Vinitra, a student of the seminar and also a student of Independent Shootfighters Inc says "It is great to learn such techniques, that give you defence against close-range attacks. I think it is very good for women, as today the city has many young single working women who live alone, and learning such an art gives one immense confidence."

"BJJ not only helps you be in great shape, you also learn a lot about your body, it teaches you the right ways to exercise your body, and mold it the way you want. With practice and training you get a sense of confidence and calm, it is a very internal growth as well. BJJ has a lot of balance, coordination and breath control, we even do a lot of meditation, so it even works on your problem solving abilities," adds Bhalla.

There is no secret in getting better at BJJ other than training hard. Amit Bhalla is training under Marcus Vinicus, who holds a 4th Degree Black Belt in Brazilian Jiu Jitsu, 2nd Degree Black Belt in Judo and has trained and coached many top fighters to championships in the UFC, Pride and many other MMA Leagues. "My instructor Marcus Vinicus, worked hard on me and my friends, he made sure that I did not miss any of the fundamentals, all that I know today I owe it to him. That is the secret of BJJ, training hard, good instruction, focus, dedication and proven techniques." says Bhalla.

"BJJ has given our understanding to fighting and self-defence a better edge. It has been a great experience learning this art," says Mohan.⊕

When a school hides the identity cards of its students!

In light of the recent cases of child sexual abuse in schools, a citizen asks pertinent questions about the current education system.and wonders if education has lost its nobility.

World Environment Day celebrations at Narsipura Lake. This is an initiative taken by a group of young kids called ‘Pancharathna Plus’.

Citizen Matters, Vidhi Legal invite you to a discussion on formalising the Gig Economy

COVID-19 crisis brought into sharp focus the precarious conditions of gig workers. How can the gig economy be regulated to ensure fair work conditions? Tune into a discussion by Citizen Matters and Vidhi Legal.