One fine morning (around 30 years ago), waiting at a bus stop in Madurai, Arjumand Fatehally saw a street child attempting to stick the top of a discarded cigarette box with her saliva – in an attempt to make something. Keenly observing her for a while, Fatehally sat down and tried to help the child make her ‘toy’. Of course – she missed her bus. But she says she found her true passion in life – making crafts from ‘waste’.

Arjumand’s enthusiasm, at the age of 79, to continue this work and share it with schools and galleries would put all of us to shame. She says she dreams of igniting in every child – the desire to create their own play materials from ‘waste’. Her only request she says is that she can no longer travel by bus! 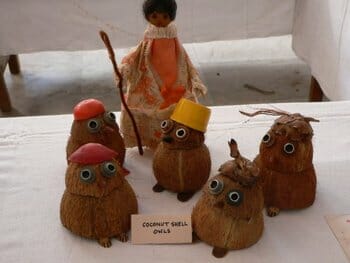 At the day-long exhibition of her work held on Sunday, February 28th at Neeladri Mahal Apts, Nandidurg Road, she shared how she loves to observe children as they look at her creations. She says the wonder and excitement in their eyes is what inspires her to do more.

The exhibits included several nursery rhymes and fairy tale characters created out of everyday waste. For instance, the Amul chocolate cover trains and the corrugated box tower for Rapunzel were interesting. So were the little plates made for a tea party from aerated bottlecaps, the camel made from toothpaste caps and penguins at the North Pole!

The last time she had exhibited her work was almost a decade ago. Since then, relocating a few times and then the loss of her husband had forced her to slow down her activities. However, in January this year she decided to restart by making  calendars (both desk and wall) with pictures from her creations.

Even today, Arjumand believes that parents and educators need to understand the value of all materials and that nothing is really ‘waste’. Only then can they encourage children to create their own toys and play materials through ‘waste’.

For a very interesting and useful resource on this, see – here and here.

She recounted an incident at Presidency School, Madurai where she used to teach. She asked children to start collecting empty biscuit boxes, candy wrappers, egg shells, pencil shavings and other waste materials. But the children came back saying though they had tried to, their parents had gotten angry and thrown away everything as junk. She then realised where the problem lay. She held classes for the parents in small groups explaining the reason behind such an effort. Never again did the children face such a problem!

If you are interested in having an exhibition of her work or buying calendars, you could contact her or her daughter Nikhat  Aslam at 080 23430383 or nikhataslam[at]gmail[dot]com. ⊕

The best way to get acquainted with Bangalore is walk through it. Apart from the state-run tours, you can try the other conducted tours and walks suggested here. However, if you want to avoid going

These women weave warmth into lives of strangers

An email from an NGO changed the routine of the five women who went on to prepare quilts for the homeless, by collecting unusable cloth from various vendors.