On Sunday, the 27 April, 2008 at 8 AM, a group of eleven people met up in front of the Apsara theatre at K R market and embarked upon what could well be called Bangalore’s first ever PhotoWalk.

As the name suggests, a PhotoWalk is all about people walking and taking pictures of whatever they find interesting along the way. They walk along as a group and click photographs, while sharing their information related to photography, to the buildings they pass by, or about anything else they find relevant. This concept as first mooted and implemented in Chennai by blogger Chandrachoodan.

The first PhotoWalk in Bangalore required no entry fee, and was also open to those who had no cameras or not keen on taking pictures, but still wanted to join the group just to have fun on a Sunday morning in an interesting way. What the PhotoWalk did require, however, was for the participant to walk along a fairly long route on a hot Sunday morning, and try having a good time doing so!

The eleven people that gathered on Sunday morning were led by 25-year-old Karthik S of Bangalore, who initiated this venture by writing about it on his live journal (http://skthewimp.livejournal.com), calling for interested participants. His post on the journal described the PhotoWalk concept and included the route that the participants would take.

Aadisht Khanna, an avid blogger and a friend of Karthik’s was also instrumental in publicizing this walk by cross-posting the information on his blog. Accompanying Karthik and Khanna on the walk were Prabhu Krishamurthy, a photography enthusiast and engineer from Basavanagudi, Tharunya Balan, an architect from Indiranagar and Subrat Mohanty, one of the co-founders of Progeon, from Koramangala, among others.

The group was to start from the KR Market flyover and walk all the way to the flyover near Gandhi Bazaar, while passing through a patch of Bangalore still sporting its old buildings and largely standing the way our grandparents had seen it.

This was a unique opportunity for walkers look closely at the buildings that they would otherwise pass by without a second glance on most days. Their first stop was the Bangalore fort, the interiors of which would not have been seen by most Bangaloreans. Each of the enthusiastic walkers were entering the Fort for the first time themselves. The small but manicured lawn, the many gates at the fort and the graffiti on the vandalized fort walls provided ample material for photography. It was also a chance for them to recall the city’s history and exchange notes about the architecture of that period.

The fort proved to be an engrossing venue and the group spent nearly half an hour looking around in fascination before heading towards Victoria Hospital next door. As the group walked past, onlookers threw curious glances at them, probably finding a bunch of people taking pictures of everything in sight intriguing, but curious glances were thankfully all they got. 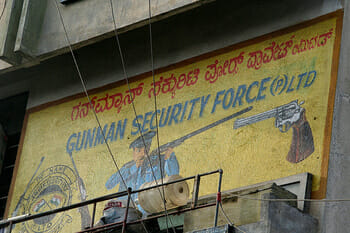 Everyone agreed that it was a good idea to click pictures in a group rather than doing it alone, the numbers providing an implicit safety as well as legitimacy to the whole exercise.

The PhotoWalkers then moved along K R Road to take photographs of the wicker basket weavers lining the road. The Bangalore Institute of Technology, the Theosophical Society and other buildings along the way were also photographed, as the more knowledgeable within the group shared information about these legacy buildings.

Apart from these, the group also had fun taking pictures of signboards with incorrect spelling or funny content, all of which have been uploaded at the Flickr site: www.flickr.com/photos/tags/bangalorePhotoWalk

Karthik had planned to end the PhotoWalk with breakfast at Vidyarthi Bhavan in Gandhi Bazaar, the popular eatery famous for its butter-topped Dosas among Bangaloreans across the world, as a fitting finale to the exhausting trip. The hotel venue was closed for renovation though, and the group had to make do with an SLV that was close by instead.

Talking about what prompted him to initiate this interesting venture, Karthik says that one of his favourite hobbies has always been to take long walks all by himself. A couple of years ago, a friend suggested that he should do photo essays of his walks, but Karthik found it odd to walk around his own city with a camera.

"When I heard of the Chennai PhotoWalk concept through Chandrachoodan’s blog, I thought this would be a good way of implementing this long-pending plan," says Karthik.
"Plus, it would be a good chance to meet new people and share my knowledge about the city with them."

Karthik feels that this walk was a success because eleven people showed up when he was expecting only ten! He also got a fair idea of the duration of such a walk, and this would help him plan the next walk better.

The walkers have decided to have the PhotoWalks every last Sunday of the month, with Karthik filling in the relevant details on his live journal. People interested in joining the group can communicate their participation through his blog. Log on to http://skthewimp.livejournal.com for details about the next PhotoWalk. This was originally planned for Sunday, 25 May and is now slated for the first week of June.

As one of the initial eleven who had a great time on 27 April, you can be sure I will be part of the next one too. I hope to see you there as well. ⊕

About Hari Shenoy 9 Articles
The author has not yet added any personal or biographical info to her or his author profile.

This is what Bengaluru Blueprint group members have to say

What do the members of Bangalure Blue Print Action Group say regarding the committee and its clash with Metropolitan Planning Committee? We spoke to a few of them and this is what they had to say.

Starting with one apartment, over six apartments in LB Shastry Nagar have now taken up waste management. Trupti Godbole shares their experience.