Fifteen trafficked bonded labourers including four child bonded labourers, aged between five and eight, were rescued on May 11th 2016 by the Bangalore Urban District Administration and local Police assisted by International Justice Mission (IJM) from a brick kiln in Anekal, Bangalore Urban District. The victims belonging to five families were held in bondage at the kiln for three to seven years. Three infants were also rescued taking the total number of victims to 18. 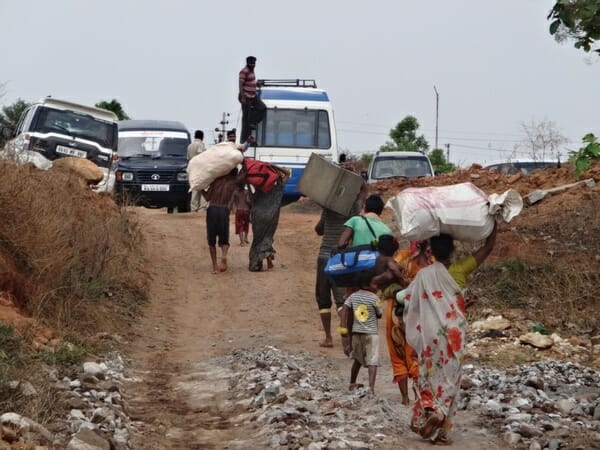 The victims rescued from the brick kiln in Anekal. Pic: IJM

The supervisor of the brick kiln was arrested from the kiln and he has been remanded to judicial custody till May 25th, while the owner of the kiln is absconding. A case has been registered at the Attibele police station under IPC 370 (Trafficking of Persons) and the Bonded Labour (Abolition) Act, 1976.

Bonded labour is a severe human rights violation abolished by the Bonded Labour Abolition Act (BLA) in 1976. A Bonded Labour System is a system of labour where a person forfeits his rights and freedoms because of a debt or other obligation. In most cases, advance is used as a bait to trap labourers into bonded labour circumstances where the labourer is forced to continue to labour under severe restrictions of movement, employment and most often is paid less than the minimum wage. Under the Act and judgments of the honourable Supreme Court, there is no need to prove physical restriction for labourer to be bonded. A bonded labourer can be a man, woman or child.  Victims of bonded labour are subject to oppression, abuse, and are denied basic human dignity and rights enshrined in the Indian Constitution. Proactive intervention on bonded labour cases demonstrates commitment to prioritizing and eradicating bonded labour crime from the nation.

Ankit (name changed) a father of three, was told by the trafficker that he will receive good wages and a house when he was brought to Bengaluru at the owner’s instructions seven years ago. He says, “After I began work in the kiln the owner told me that the sardar (agent) who brought me to Bengaluru had taken Rs 40,000 in my name. He said my family and myself have to work to clear this debt or pay him Rs 40,000 if we want to leave. He told me he would break my legs if I attempted to leave this place before that.”

One year ago his wife and he desperately needed to go back to Odisha as his father-in-law had passed away. The owner only relented to let them go after forcing the couple to leave their three little children behind as surety. So they left their children with the other labourers, attended the funeral in Odisha and returned to work in five days. They borrowed Rs 5,000 from the owner for the trip and the funeral expenses, so they continued to be in his debt.

“Convergence is key to ending an organised crimes like bonded labour trafficking where whole families are kept in confinement and forced to work mostly in lieu of an advance,” says Esther Daniel, Director of Justice System Engagement at IJM.  “Through Section 370 of the IPC, which is a non-bailable offence with a minimum sentence of seven years, we have a strong law to combat this crime. What we now need is for the different departments working towards identification, rescue and rehabilitation of victims as well as the arrest and prosecution of perpetrators to come together in a convergent approach to end the crime of human trafficking in the state”.

The labourers were exploited and worked seven days a week from 6 am till 7 pm on weekdays and till 3 pm on Sundays. On several occasions, the adults and the children were beaten by the owner and the supervisor, if they felt the job was not done well or if the labourers said they want to leave. It was the job of the four children to turn the bricks as they baked in the sun. The children were paid between Rs 10 and Rs 20 a week each.

“I wanted to send my daughter to school, but I did not have any money. So I brought my family and came to Bengaluru thinking I can work and save some money to send her to school. But we ended up being trapped here,” said Sunil (name changed) a 30-year-old labourer. “I told the owner that I need to go back to Odisha as my daughter is grown up now and I need to put her in school, but he never let me go for three years; instead, my daughter who is only seven is working here.”

The bonded labourers have received Release Certificates from the Government of Karnataka and they will be enrolled in IJM’s two year rehabilitation program for rescued bonded labourers in Odisha.

International Justice Mission (IJM) is an NGO that assists the public justice system to secure justice for victims of bonded labour and other forms of violent oppression.  Our lawyers and social workers partner with the local District Administration, police and public prosecutors across states to ensure victim rescue, rehabilitation, and prosecution of perpetrators, and to help develop a thriving public justice system that delivers justice for all victims of violent oppression. Since 2001, IJM offices in India have assisted state and local government officials in the release and rehabilitation of over 10,000 victims trapped in the bonded labour system.

About Ignatius Joseph 2 Articles
The author has not yet added any personal or biographical info to her or his author profile.

Despite protests from residents BBMP is yet to build a boundary wall around the drains that were opened up. NGV (Koramangala) residents had to bear the brunt of it during heavy rains last weekend.