The Bruhat Bengaluru Mahanagara Palike (BBMP) has wrongly sanctioned a plan for a commercial building in Panduranganagar, located off Bannerghatta Road near the Indian Institute of Management, in violation of zoning rules in the city’s Revised Master Plan (RMP) 2015.

The building under-construction, a convention centre at Site No. 223 in the layout is on a plot size measuring 400 sq metres. Whereas, a minimum of 2000 sq metres is required for building a convention centre, as per the BDA’s RMP, which has not been followed by the BBMP’s Town Planning department in Bommanahalli zone. 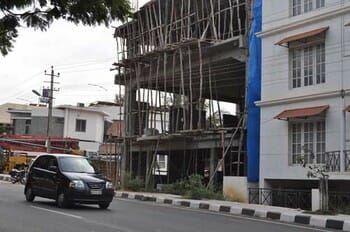 The plan sanction for this convention centre under construction in Panduranganagar, has been wrongly approved by the BBMP Bommanahalli office. Pic: Vaishnavi Vittal

Speaking to Citizen Matters, a top official of the BBMP’s town planning department admitted that there has been a mistake in sanctioning this plan.

The official spoke under condition that he not be named as all sanctions are given by the sanctioning committee constituted for each BBMP zone, thereby not being the responsibility of a single official. The sanctioning committee consists of an Assistant Engineer, Assistant Director of Town Planning, Medical Officer Health, Chief Engineer, Deputy Commissioner and Joint Commissioner.

The official says, "Certain errors may be due to confusion in ancillary details mentioned", referring to rules in the RMP. 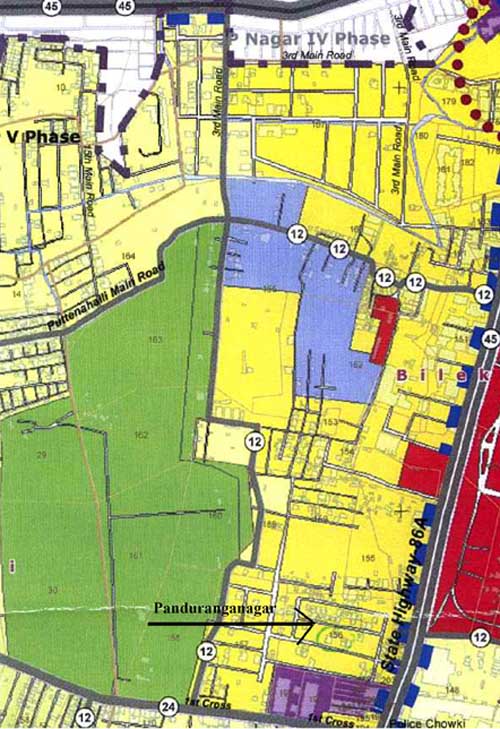 In 2007, the BDA published the RMP 2015, Zoning of Land Use and Regulations. Under this, Panduranganagar has been slotted under a category named Residential (Mixed), meaning this area can be developed for both residential and commercial purposes. Even as the main land use is for residences, land can also be used for commercial purposes, specifically the C3 category. Convention centres are permitted under C3. (C1, C2 and C3 are the Master Plan’s classifications for commercial buildings).

The Residential (Mixed) section of the Master Plan says that for plot sizes between 240 and 1000 sq metres, with a road width of 18 metres, (60 feet) land use can be given for C3 purposes. Since the plot where the convention centre is coming up measures 400 sq metres with the road width of 18 metres, the official says BBMP sanctioned the convention centre on this basis.

However, this section also says that to use the land for commercial purposes, the Master Plan’s space standards (called Table 7) for various types of commercial buildings must be followed. According to these rules, for convention centres the plot size should be a minimum of 2000 sq metres, and the minimum width of the road should be 18 metres (approximately 60 feet). 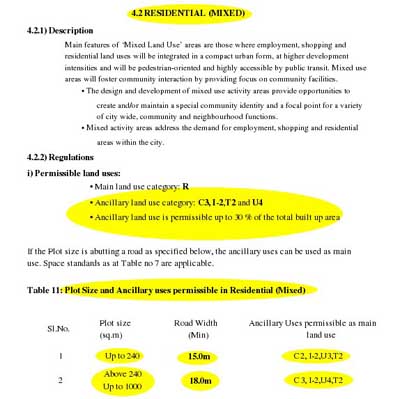 Interpretation of the Master Plan has been the basis for a legal battle that the Panduranganagar Residents’ Welfare Association (RWA) has launched against the BBMP. The Association says that the minimum plot size 2000 sq metres should have been the rule applied, and has recently filed a writ appeal in the High Court arguing that the current CDP (Comprehensive Development Plan) is not being followed during execution. 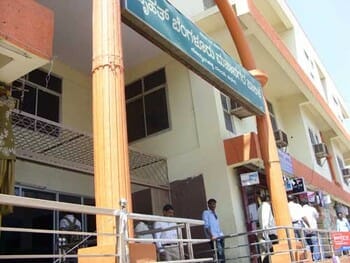 The plan sanction for the convention centre has been approved by the sanctioning committee of the BBMP’s Bommanahalli zone. Pic: Vaishnavi Vittal

The CDP is a statutory document that is for use by town planners to regulate development of the city in terms of land use. As per the Karnataka Town and Country Planning Act 1961, this is revised every ten years. In 2005, the BDA brought out the Master Plan 2015. Certain sections of this, including zonal regulations were revised and published in 2007 as the RMP.

For almost two years now, this RWA has been opposing such violations in their area. K P Dinesh Kumar, 43, President of the Association says that their area is primarily residential and that commercial complexes should not be allowed. "After amendment of the CDP some people started applying for commercial building licenses", he says.

The RWA initially approached the BBMP with regard to two other sites, Site No. 72, where a gymnasium is coming up and Site No. 74, another commercial building which is currently vacant. Kumar says that they found these two buildings to have fewer cars parking provision than the prescribed limit.

The town planning department official denies any such violation with regard to parking, adding that an Occupancy Certificate (OC) would not have been issued by the Joint Director of Town Planning if parking violations were found.

In 2008 and 2009, the Association took the BBMP first to civil court and then to the High Court regarding some of the other cases. Their grounds were that Panduranganagar was a residential area and not commercial and they challenged the RMP itself. The efforts did not yield results. A single judge of the High Court merely asked the association to approach the BBMP directly.

Kumar and other members have since filed a writ appeal with a Division bench of the High Court, and have included the case of the convention centre. The case is likely to come up for hearing some time this week.

BBMP yet to respond to concerned residents

On February 2nd 2010, members of the RWA met the BBMP Commissioner Bharat Lal Meena to bring to his notice the unauthorised commercial buildings in Panduranganagar. They handed over a letter to him, mentioning each of the violations in the area. Kumar says that the Commissioner told them that he will look into the matter and forward the same to the Joint Director of Town Planning. The RWA has not received any communication from the BBMP after this.

They have also approached members of the Chief Minister’s Agenda for Bengaluru Infrastructure Development (ABIDe) task force and the BBMP’s Bangalore Metropolitan Task Force. Further, they have written to the Additional Joint Commissioner (Bommanahalli zone) requesting not to issue licenses to commercial buildings in their layout.

Meanwhile, the fate of the convention centre coming up on Site No. 223 is still up in the air as construction work that began in 2009, is progressing slowly. The town planning department official refused to comment on what action will be taken next, but says that the building could be used for some other purpose mentioned in the RMP in accordance with the plot size.  ⊕

Here’s how leachate will be controlled in Kannahalli composting facility

Kannahalli composting plant ran into problems and saw protests from villagers. Here is how the firm is trying to control the bad odour.

When Zindagi Na Milegi Dobara works, it’s because the film is genuinely funny. Backed by production values that raise the bar for international cinema, it is always eminently watchable.

Rate your ward councillor for CfB’s ‘Corporator No 1 Awards’

Citizens for Bengaluru will award the city’s best corporators in a ceremony on July 14th. The awardees will be selected based on citizens’ rating through an online survey form