For someone who mooted the idea of Bus Day, 23-year-old Manjari Vishnoi could not venture out on February 4th 2009, thanks to a running temperature. Nevertheless, she’s happy about the outcome of the initiative and says, "I think it went pretty well. I know a lot of people who took the bus." Manjari, a software engineer at Cisco Systems (the network equipment major with a large presence in Bengaluru), is also a member of the online citizen community Praja.in. Praja has been working closely with BMTC on Bus Day initiative.

Manjari says she, along with other Praja members, have been regularly interacting with BMTC officials for many months now, on various plans. In November last year, Praja had organised an event on sustainable transport. It was during this time that the group was also in talks with the BMTC to organise ‘Bus Day’. Manjari says that she regularly interacts with Mithila Jha, an Urban Planner with BMTC, and it was during one of their discussions that this idea came up. "We realised that the only way people will take the bus is to make them realise how easy it is. So we thought one day should be for the bus".

By the end of December, BMTC gave the green signal for ‘Bus Day’.

Through December and January, several members of Praja actively worked with BMTC to make this day happen. (Manjari herself could not actively continue because of her professional work commitments.) Initially the plan was to hold it in December, but due to holiday season, it was pushed to January. BMTC finally zeroed in on February 4th 2010.

Says Khader Basha Syed, a Praja member who was entrusted with the online campaign and e-mail distribution, "We committed to help the BMTC with the publicity by running an exclusive online campaign on the Praja website". Praja also helped by sending out mass e-mails, gathering public feedback on the Praja website, route maps and even ran polls and surveys to gather demand indicators. Notably, Syed worked on this from the other end of the world, in Gaithersburg, Maryland (a suburb of Washington DC in the USA).

In part due to the efforts of these citizens, BMTC added about 300 buses to Electronic city and ITPL (Whitefield) routes for Bus Day. These include AC and non-AC buses (Vajra/Volvo, Tata Marcopolo, Suvarna and others). The buses in these routes went through an additional 1500 trips on February 4th, says P K Garg, Director (Projects) BMTC. On regular days, 269 ordinary buses ply to and from Electronic city making 2262 trips. 143 Vajra buses run on 1044 trips. To ITPL, on regular days, 140 ordinary buses make 1018 trips and 100 Vajra buses make 784 trips.

Garg says that these buses were taken from their additional fleet of about 600 buses. He says that about 600 crew were on these 300 buses, some working on two shifts and others forgoing their leave. He adds that according to an estimate by Electronic City Companies Association and Outer Ring Road Companies Association, an additional 10,000 people took buses on these routes on Bus Day.

Additional Commissioner of Police (Traffic) Praveen Sood says that BMTC requested Bangalore Traffic Police to increase its field staff across three routes. An additional 50 to 60 traffic policemen were deployed from other areas, along Trinity circle to ITPL, Marathahalli to Central Silk Board and Central Silk Board to Electronic City. These policemen ensured movement of buses on the left lane, he adds.

Sood says that along these corridors the number of private vehicles "were a shade less". Though he does not have exact figures, Sood says that there was less congestion with 10 to 15 per cent less private vehicles. He also says that bus registration numbers were noted down, if they were seen not stopping at bus stops. "We have passed on these numbers to the BMTC MD".

Citizens hop on to buses

Among those who rode the bus was Quality professional, Mahendra M Pyati. A resident of Sunkadkatte in North Bangalore, Pyati chose to take the bus to his office in Whitefield, instead of his office cab. "I took a bus from my place to KR Puram and from there I took a bus to Whitefield. I took a regular bus, it was clean and comfortable". He says that surprisingly the bus commute took him a good ten minutes less than his commute in the office cab. "The roads were good, less traffic. This was not the route we generally take. We took the Outer Ring Road". Ask him if he’ll now take the bus regularly and he says that he will test it out for a week and see if it is viable. 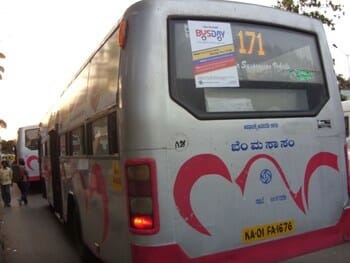 BMTC will now observe Bus Day on the 4th of every month, across different corridors. Pic: Vaishnavi Vittal.

At Pyati’s office, Quest Global, an engineering services company, posters were put up in the office to encourage Bus Day. Though they don’t have a number on how many employees actually took the bus on February 4th, Pyati says that he did see fewer vehicles in the parking lot.

BTM Layout resident Niranjan Radhakrishna also took the bus on Bus Day. "I generally take the bus on Wednesdays and Thursdays. Other days I drive down. This is when I know I’m going to be late and it’s more flexible", he says. Travelling to his office on the Outer Ring Road to Bellandur, he feels a bus is a better option because it "cuts you off from the outside" at bottlenecks like Central Silk Board, Agara and Iblur junctions.

But even as many enthusiastic citizens rode the bus, there were those who chose to use their regular mode of transport. N A Bhaskar, who leaves near Banashankari, says he would love to take the bus to his office in CV Raman Nagar. But thanks to lack of proper BMTC connectivity, he takes the office cab. Bhaskar says he prefers to take the bus otherwise.

Many like Bhaskar do not take the bus for this very reason – lack of connectivity, no frequent buses, inconvenient bus timings and location of bus stops.

For BMTC, however, it’s a start. Like Pranav Jha, a founding member of Praja.in, says, "BMTC lacks in marketing. This event has helped in that".

Garg of BMTC says that the aim of this Bus Day was to persuade "well-paid" people to use the bus and therefore these IT corridors were chosen. The BMTC plans to observe bus day on the fourth day of every month. "The next month we will look at some other corridor. By using the bus you reduce congestion and improve air quality", he says, refusing to divulge the next ‘target corridor’.   ⊕

From BTS to BMTC – lots to celebrate
‘Not to worry! Sir, this is just the beginning’
‘I wish I had started using public transport earlier’
A stress-free bus ride, but at a price

What Bengaluru can learn from bus lane projects in other cities

As Bengaluru is set to get bus priority lanes, here is a look at what worked and what didn’t in cities like Delhi and Pune

BMTC resumed services partially on May 19, but with several conditions. KSRTC has started inter-district services too.