Janapada Loka located at around 43 kms from Bangalore will make for an ideal visit for those who are who are inquisitive about cultural heritage. Just hop onto a bus, ride on your bike or stop by on the way to Mysore and have a peek at this world steeped in culture and art. Janapada Loka is located on the Bangalore-Mysore highway at about 3 kms from Ramanagaram. 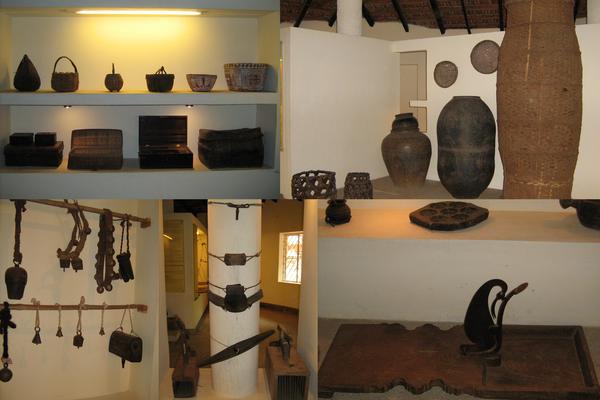 Janapada Loka located near Ramanagaram (yes, ‘Sholay‘ was filmed at one of the many rocky outcrops at this place) is a world of folk culture and art (Janapada Loka literally means folk-culture world). Walk past the main gate Mahadwara adorned with a magnificent Harige (shield used in a form of dance worship aimed at appeasing the supernatural powers) and trumpets, straight ahead to Lokamatha Mandira, a museum of artefacts that were used everyday in rural Karnataka.

In front of the museum is a statue of  H L Nage Gowda, a civil servant, writer, folklorist and founder of Karnataka Janapada Parishat. The Parishat is devoted to the study of traditional folk arts in Karnataka. Janapada Loka spread across 15 acres was established by him in 1994, soon grew to a research center recognised by the Bangalore University in 1999 and now conducts certificate courses in folklore.

Lokamatha Mandira is a simple, well-lit building that houses artefacts which are categorised into domestic utility, kitchen, farming and animal husbandry. Orderly displays of embroidery, wall sconces, cradles, cane baskets used in the harvest festival rituals, ornament cases are some of the utility objects displayed. Kitchen-ware like large multipurpose cutter/graters for vegetables and fish, big food trays, the original idli steamer, wooden spice boxes (anjaraipetti) and noodle (shyavige) press give a good feel of the bygone times of joint families where implements were handed down to generations.

The technique and art that went into the primitive ware is practical, artistic and very impressive. The farming and animal husbandry sections give a glimpse of the world outside homes in an ancient rural environ. Implements ranging from tools used to pluck areca nuts, bear and baricoot traps, large buckets to decorative bells used to adorn cattle, throat pipes, whips and cartwheel lubricant pipes vie for one’s observation. The museum is a refreshing break from dusty, ill-maintained ones that are the norm and is a storehouse of rural life. Informative placards give details in Kannada and English on each section, all the articles including their usage and area they were found in. 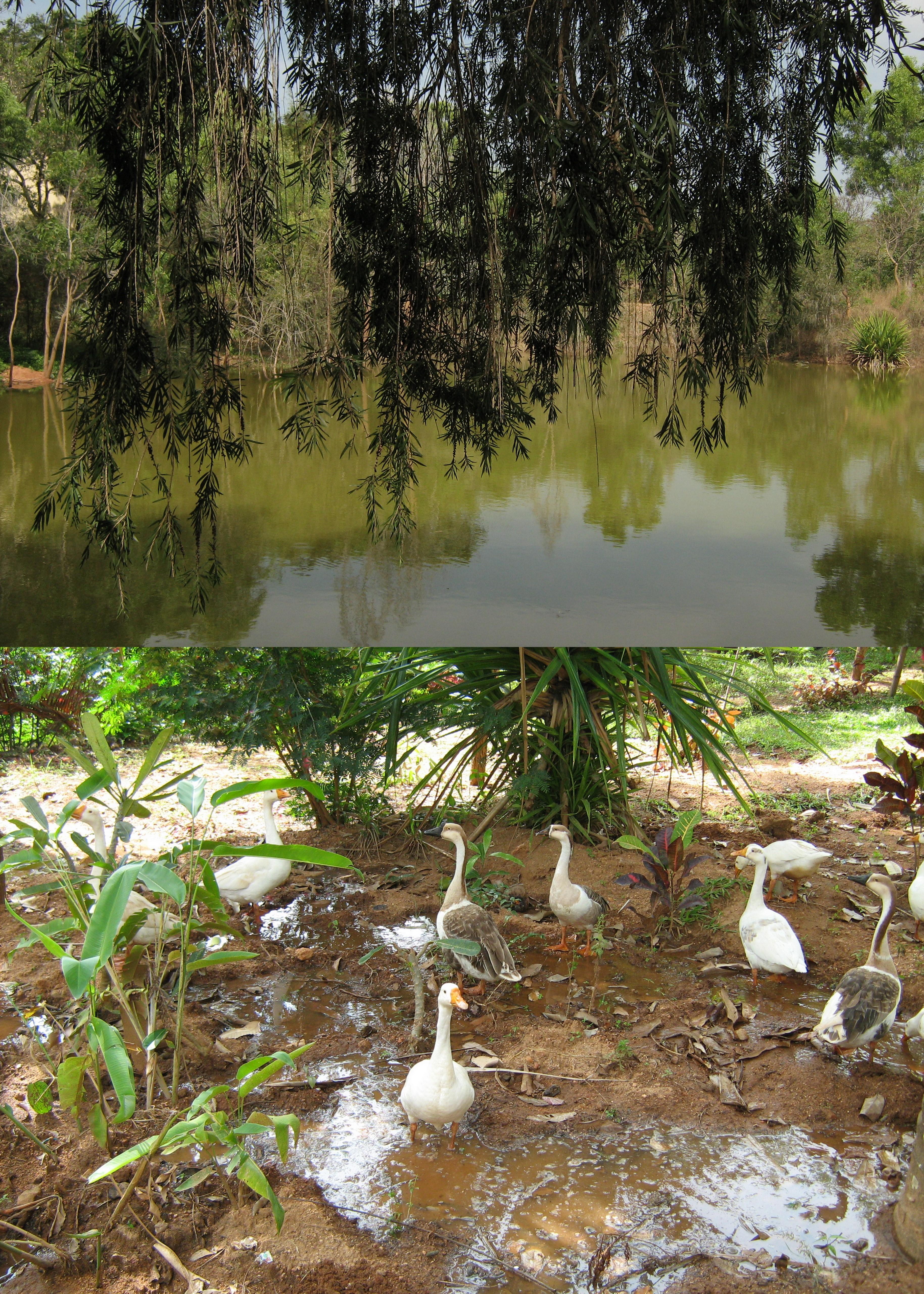 Loka Sarovara and some ducks waddling nearby.

Close to this museum is an imposing amphitheatre where shows of folk art forms are held every month. Tranquility abounds, provides a peaceful setting to explore. A group of ducks walked along to Loka Sarovara, an artificial lake. Boating on the lake had been closed for a while by the looks of a white Swan paddle boat. Benches lined alongside the lake (seemed like a world away from the crowded Kamat Lokaruchi hotel next door) were perfect to munch on a ‘breakfast’ at while reflecting on the rural Karnataka experience.

Revitalised and eager for more, the next stop was the library Saraswathi Mandira alongside the lake. On the verandah are two carriages that were used by inhabitants of the Mysore Palace and a chariot. Walk around the lake to find a magnificent Halasuru Temple Car (Someshwara temple, Halasuru) which was built in 1902, it seems that the fully decked-up car used to be 35 feet tall. There being no shelter above the car, it is covered with tarpaulin sheets that obscure quite a bit of the decorations.

Further down is Shilpamaala, a sculpture yard in front of a small Ganesha temple built in the regional style. Hero-Sati stones (placed in honor of men who die in war and wives who performed Sati) dating to the 16th century, stones of Ranganatha, Kali, that of a land inscription grant are some of the occupants of the sculpture yard.

Entered Loka Mahal, a museum of folk arts just as a group of school kids on excursion were stepping out. Colourful Gaarudi Gombe and a Yakshagana dolls from a scene in Ramayana (of Lankini and Hanuman) welcome one into the vibrant art scene of Karnataka. In this two-storied building, Yakshagana vesha and kavacha pertaining to different styles (Badagathitu and Thenkuthittu) of this popular dance drama, Soma masks and Harige (forms of dance worship), leather puppets from Bellary, Bijapura and Nagamangla, Dharwad wooden string puppets, life-size wooden rod puppets from Bengaluru, Dussera dolls, traditional wedding articles , life-size ghost idols, musical instruments, weapons, quilts, Ganjif cards and many more splendid and varied pieces imbue one with entertainment and knowledge. Here too placards give details such as, in which part of Karnataka each art form is practiced and are helpful. 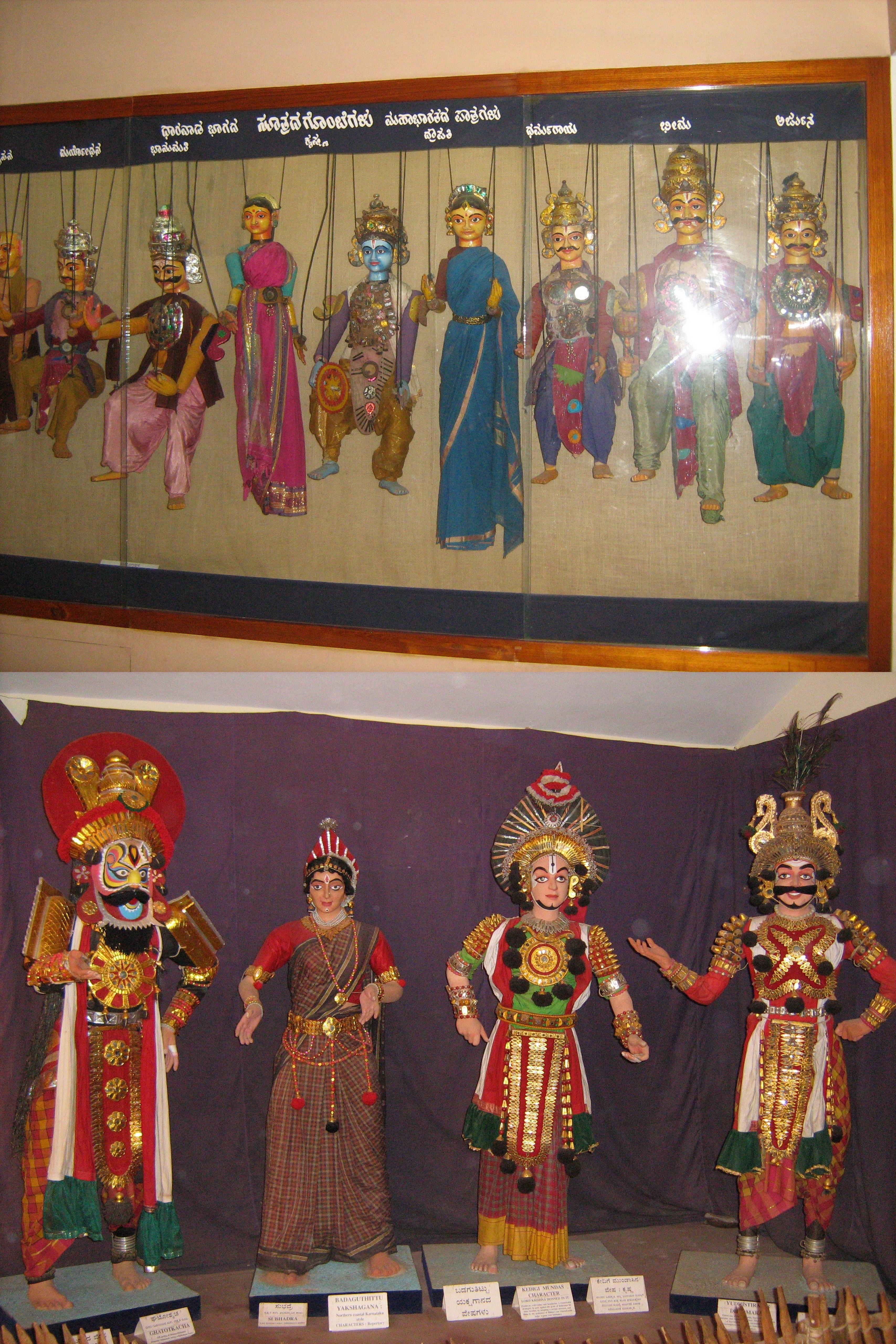 Inside Loka Mahal: (top) Dharwad string puppets made of wood; (bottom) Badaguthittu style of Yakshgana prevalent in the northern parts of Dakshina Kannada.

The last stop was to be at Heritage village, which as the name suggests, is a model rural village with a traditional house, an open-air exhibition of tools used in rural occupations like black smithy, pottery, farming and fishing in addition to a sugarcane crusher, grindstones and more. The village temple where a Ganapathi idol dating to the 17th century rests under a peepul tree completes the scene.

Doddamane is a community hall where seminars and workshops are held, also provides accommodation to visiting artists. Skilled artists live in Janapada Loka and work on pottery, make other artefacts.

This captivating journey through rural Karnataka came to a close and the morning was given a befitting end by tucking into a traditional North Karnataka lunch at the adjoining Kamat Lokaruchi hotel. Stepped out later, exhausted yet fulfilled while monkeys hopped about in the lawn where the school children were having their lunch and the ducks wandered close by. Out of the cool environ of Janapada Loka onto the highway that would lead one back to the busy, frenzied world; armed with memories and a small earthen lamp and shade that was shaped by folk artists to serve as a souvenir of the simplicity of rural life.

So buses from Bangalore to Mysore pass through Ramanagaram and the daily passenger trains to Mysore also have a stop here. Janapada Loka is open from 9.00 AM to 5.30 PM (closed for lunch between 1.30 and 2.30 PM and off on Tuesdays) Entry charges are Rs 10 for adults, Rs 5 for children. A camera charge of Rs 100 applies if you want to take photos inside the museums.   ⊕

About Poornima Sivanandam 2 Articles
The author has not yet added any personal or biographical info to her or his author profile.

Fun, in a nutshell

The Kadlekai Parishe is a cultural tradition of Bangalore that has survived for over four centuries. Rushalini Rajkumar finds how it has evolved to suit the needs of modern day city dwellers.

Naribai: a monologue that explores what respectability is

The play did not have a brochure – it was a one-woman production, and the brochure didn’t really mean anything.

The book “Selected Poems” – poems of Subramania Bharati has been translated from Tamil into English by Usha Rajagopalan. It gives an insight into the Mahakavi’s versatility while the short notes accompanying some of the poems gives an idea of the different facets of Bharati’s personality.