Bangalore Bus day! For all those who are crying hoarse about Bangalore’s transport system this must come as a shock. What is there to celebrate you say? Let me take you on a trip down memory lane and you tell me.

My schooling started with bus commutes, morning and evening. That means 16 years of friendship with the six wheeled wonder. Back in the ’80s there weren’t so many buses. I used to take the route number 137 from Yeshwanthpur to Ulsoor which would be available only once in two hours. Almost always, the buses were jam packed and foot board travel was the norm. Women commuters were not in majority, other than school students like me. Late evening commutes were impossible, because there would be hardly any women in the buses or the stops. Bus shelters were a rarity if you were not getting in from say Shivajinagar or Majestic. One had to simply stand under trees in total darkness. It was not uncommon for the men in the family to escort women to and from bus stops. 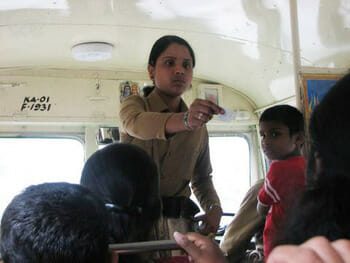 There are even women conductors on the BMTC’s staff (pic: Deepa Mohan)

The seats reserved for women were almost never available for women unless we got there first. If you tried asking the men to give up the seats, they would either ignore you or hurl abuses for being impertinent. On Saturday afternoons I had to spend two hours in the bus stop with no shelter because no buses would ply during lunch time! And if I missed the regular bus I had to take two buses to get home which was actually only about six kilometers away. The BMTC was back then called Bangalore Transport System (BTS) or fondly known as Bittre tirugi Sikkolla (once you miss it you’ll never get it) among the locals.

Now compare that to today’s situation. There are close to 6000 buses today. The seventy year old company started off with just 113 buses! Even the suburbs have buses plying more frequently than ever before. The buses have plush interiors. There are airconditioned buses – something no Bangalorean ever dreamed off even ten years ago.

There are mall specials and hospital specials.There are even the ladies’ special in pink. One can argue about the sexist nature of it all; but I’d like to be more open to the idea that someone up in the Vidhana Soudha is actually considering women when it comes to making policies as a first step. The staff is more polite and helpful. There are even women conductors if one was ever hung up about no women on the BMTC’s staff. Most bus stands have a shelter and are fully lit up. Ladies’ seats are not occupied as often by men and they do vacate it if you point it out to them.

True to Bangalore’s character, BMTC has become tech savvy. One can log into their website to find the bus routes and timings that is convenient for you.

Yes there are loopholes in the system even now. There are opportunities to optimise some of the routes better. Yes, it is a pet peeve of every Bangalorean. But an average Bangalorean still depends on these very buses to commute on a daily basis. And it is not always because she cannot afford a two wheeler or a car. Buses are simply much more comfortable to travel in. Imagine how much reading or sleep you can catch up on? Not to mention the health benefits of not gettingworked up while drivingin heavy traffic. Plus there are the long term environmental benefits of using public transport.

There are reasons to celebrate – you just have to know where to look. So what are your reasons?

Bengaluru’s first Bus Day gives fillip to public transport
‘I wish I had started using public transport earlier’
A stress-free bus ride, but at a price
‘Not to worry! Sir, this is just the beginning’

In defence of honking

Why a normally quiet person is forced to use the horn on Bangalore roads.