Close to 500 employees from companies within the Salarpuria Softzone campus including National Instruments, Airvana Akamai, SonicWall and so on were treated to a collection of bikes from Track & Trail and SportsXS on January 22nd.

It was the first of the cycling workshops conducted by Bangalore Bikers Club (BBC) in 2010. 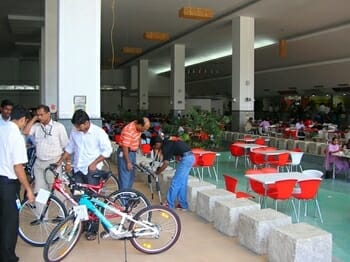 Personal cycles from members of BBC were displayed for participants to check out. It was nice to see IT professionals growing 20 years younger and enjoying the bike trials like children; but who said cycling is only for kids?

Mayank Rungta, an avid cyclist, who also happens to be a techie presented facts and figures about the benefits of cycling and why it is the need of the hour. He said that cycling is not only a solution to traffic problems in Bangalore but also for checking the growing number of lifestyle related diseases amongst young professionals.

The presentation included a few success stories of people whose lives have changed dramatically ever since they switched to cycling. Needless to say, cycling conserves the environment as well since it requires minimal infrastructure.

The presentation was followed by one on one interaction with the BBC members that helped clarify individual concerns and answer specific queries from the participants. A lot of doubts and apprehensions about cycling were clarified, the most common ones being – Is it safe to ride? How can I ride 10 kilometres one-way?

Murali Krishna, Ann Maria and a few other existing cyclists and members of BBC in the Salarpuria Campus initiated the idea of hosting the cycling awareness campaign. With the help and co-operation of their respective company administration officers and Salarpuria administration team, the event was made a possibility.   ⊕

About Lavanya Keshavamurthy 5 Articles
The author has not yet added any personal or biographical info to her or his author profile.

The next door philantropist

Looking at Sarita Kotagiri, one realises that to help people, all you need is a big heart.

Does Abacus help your child score a centum in mathematics? Does it help to push the child to learn it for the sake of scoring?

Documentary film ‘Water and a City’ traces the journey of water into and out of urban Bangalore homes.