If you reside in any of these wards, it is likely that you have either been visited or will soon be, by officials seeking information about your property. These are officials of a not-for-profit organisation called My Bhumi, who are carrying out a ‘property survey’ on behalf of the BBMP, for Wards 1 to 11 in North Bangalore.

“Many people are not paying tax, that’s why we are doing this. We will feed this into the computer. We will get name of owner, type of building, how many floors, how many portions on rent, tiled roof or RCC roof, phone number, KEB meter number”, says Veerupaksha Mysore, Joint Commissioner (Yelahanka zone). Incidentally, on contacting the Deputy Commissioner (Revenue), D L Chandrashekar, he said that no such survey was being carried out. “If there is any work, our own department people only will do”, he said.

Mysore explains that this process is being carried out because many people do not pay property tax. “Next time we can issue notices and register their names. Also, this can be used for other purposes like census. Those who have not taken katha, they can apply for that”. He also adds that when the area was handed over from the CMC (City Municipal Council) to BBMP, there was no information available on property. “For us to plan projects and develop the area, we need this information”.

My Bhumi, which started work on this survey in September 2009, is a voluntary organisation and called themselves ‘a trust for global consciousness’. As per their website, they have previously carried out activities for various government agencies including programmes for BBMP pourakarmikas, survey of 50 slums for the use of BBMP as part of their slum improvement programme, and so on.

A sample copy of the questionnaire prepared by My Bhumi and BBMP. (click on the picture to enlarge) Courtesy: Sindhu Naik.

Madhuri Subbarao, Lead Enterprise, My Bhumi, says that the property survey is a contract-based job that they are carrying out for the BBMP. Madhuri is also a trustee of My Bhumi. Her husband and fellow trustee of My Bhumi, Aneesh Sreedharan K, says that My Bhumi intiated this survey and presented a proposal to the BBMP more than six months back. “Initially it was not accepted. But later when Bharat Lal Meena (BBMP Commissioner) came he showed interest and we are doing this as a pilot project”.

Sreedharan adds that 50 per cent of the cost of this is borne by BBMP while the other half is from their own pocket. (Madhuri has previously worked with Reuters and Accenture in Environment Management systems, and Environment Health and Safety, respectively. Sreedharan is a law graduate and also has a post graduate degree in a HR programme.)

A team of eight from My Bhumi is working on this survey. “We are finding how many residents live in a layout, how many have kathas”, says Madhuri. My Bhumi has prepared a questionnaire, approved by the BBMP, which is being handed over to residents. This questionnaire includes information such as electricity board number, area built, vacant area, floor area, roof type, tax paid receipt number, khata number and so on.

Interestingly, there is also a column for pets, which Madhuri says is because the BBMP wants to record the number of pets, total number of registered pets like dogs, and may tax those whose dogs dirty the layout. In the case of dogs, a license has to be obtained from BBMP.

Madhuri says that this door-to-door survey has been carried out in Vidyaranyapura, Singapura, Kodigenahalli, Sahakarnagar and Yelahanka so far. “We just want to ensure that the data is correct. We don’t have a deadline as such. But it takes around 10 to 15 days to cover one and a half wards”.

But even as Mysore says that the BBMP does not have the information and is therefore carrying out this survey, Madhuri says that the information is present with the BBMP but is incomplete. “And we have some new questions in our survey – like pets, built in (up) square area. And we are personally visiting everyone, we are not just looking at files”.

This property survey, however, has come like a bolt from the blue, for many residents in the above 11 wards. Take the case of RMV Clusters, an apartment complex in Devi Nagar, Hebbal. 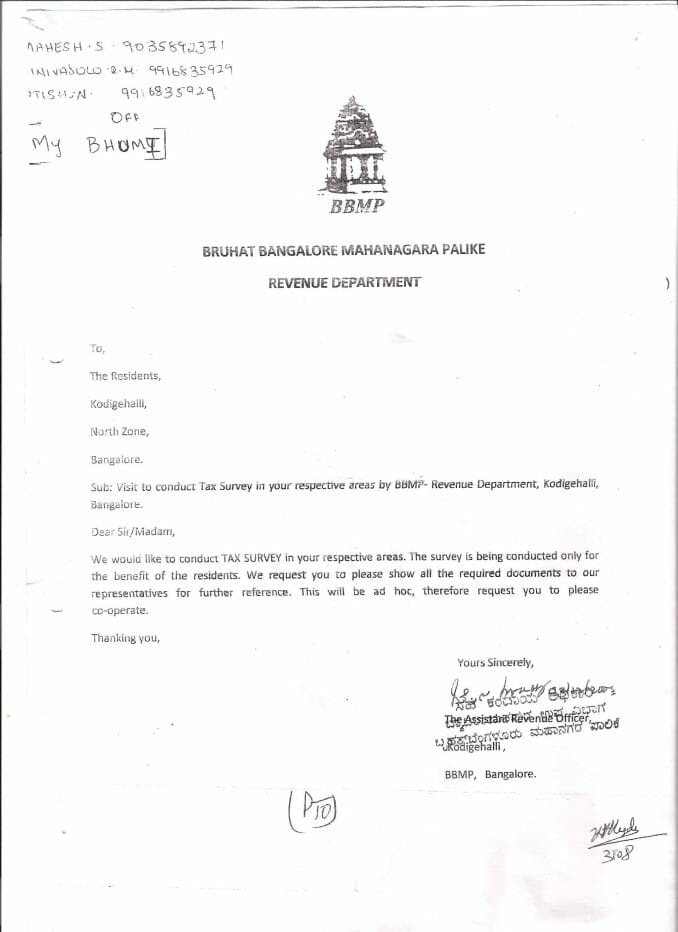 The My Bhumi team showed this letter from the BBMP, to residents of RMV Clusters. (click on the picture to enlarge) Letter courtesy: Sindhu Naik.

Sreedhar Shenoy, one of the residents, narrates that around two weeks back, four people came to the apartment complex claiming they were from BBMP and demanded to be allowed inside. “We asked for identification. They had My Bhumi ID. So they were not from BBMP. They showed us a letter. It had the BBMP letterhead, so then we knew it was official”, says Shenoy. But these residents took the stance to not allow this team into the complex.

Instead they have taken it upon themselves to collect the information from the residents and had it over to My Bhumi. “I don’t mind giving data but it shouldn’t go to wrong hands. I told them I need an acknowledgement from the BBMP”, Shenoy adds.

Shenoy and his neighbours also checked with their local BBMP Tax Inspectors and Revenue Officers to verify the authenticity of this survey. Once this was confirmed, they have now put up a letter on the notice board, requesting residents to submit their property information.

Says another resident of this complex, P S Rao, who contacted the Assistant Revenue Officer of Vidyaranyapura, “She said that this was a door-to-door tax survey to identify those who didn’t pay taxes. She felt she could not appreciate or understand why it was done for those with kathas”.

This is a question that many are asking including Sindhu Naik, another resident of RMV Clusters. “Why can’t they use the data in the BBMP tax records. It is just duplication of efforts. Given the amount of space there is in the form, it is error-prone”, she opines.

Madhuri says that these questions are inevitable as this is probably the first time that these residents are being visited by officials on behalf of the BBMP. “Some people like senior citizens, they ask why we are doing this when they have already furnished all the details”, she says.

Joint Commissioner Mysore says a number of residents have contacted the BBMP office enquiring about this survey. “Yes, they ask are you from income tax department, from Lokayukta, raids, people have asked. But otherwise people are cooperative. They call us and ask. But anyways we have issued ID cards”, he says.

Another worry that these residents of RMV Clusters have is that of errors. Madhuri says that they are not ruling out the possibility of errors. “See citizens themselves may not give correct data. Our people may make errors because they are going to so many layouts. It will never be error-free. It’ll take at least four phases to get it right”, she explains.

In the case of this particular apartment complex, Sindhu says that the original questionnaire from My Bhumi was modified to make it relevant to apartment complexes. They modified it to leave out details such as vacant area and floor area.

How will the survey data be utilised?

Sindhu continues to voice her apprehensions about how the data collected will be used. Sreedharan says that the information collected will be shared with BBMP and Resident Welfare Associations (RWAs) of respective layouts. “Whatever data we collect it is for the citizens. The question of abusing the data doesn’t come in. We are not asking for age and gender of the owner or how many family members are there or what kind of pet you have”. Sreedharan did not answer the question of whether their contract with the BBMP states if the information should be kept confidential.

My Bhumi’s Sreedharan did not answer the question of whether their contract with the BBMP states if the information should be kept confidential.

Sindhu also points out to an exercise that was carried out about three years ago, by an organisation called eGovernments Foundation, who did something similar in Byatarayanapura when it was under the CMC. eGovernments Foundation is a not-for-profit trust with a goal of creating an eGovernance system to improve the functioning of City Municipalities leading to better delivery of services to their citizens.

eGovernments Foundations undertook a data gathering exercise and GIS (Geographic Information System) digital mapping across 57 cities in Karnataka. Called Nirmala Nagara, a test case was taken up in Byatarayanapura to map properties in the area and get property tax information. The organisation worked with the then CMC officials to collect this information. Once the area was handed over to BBMP, work stopped. Says Srikanth Nadhamuni, co-founder and Managing Trustee, eGovernments Foundation, “We had not completed the work. It’s an enormous task. It takes three to four years. When the transition happened in the BBMP, it was stopped”. Nadhamuni says he is not aware of what the BBMP has done with the information they had collected then.

Sindhu feels that the BBMP should use the learnings of that project for their current survey.

Madhuri says that soon she will make all ‘Frequently Asked Questions’ available on their website. The team is looking to complete the survey in the above-said parts within the next three months. Mysore says that presently this survey is only for the 11 wards and there are no plans to carry them out in other parts of the city. Madhuri says, “This is a learning session for us. We would like to complete this first. Yes, if we are offered to do this in other parts of Bangalore, we would like to”.    ⊕

Ward committees look good in theory. Bengaluru has started witnessing monthly meetings in wards slowly. But is the existing system good enough to allow ward committees to work for public?

The reality of online learning in Bengaluru’s govt schools

Children in government schools are facing a huge learning gap, as they hardly have live online classes, unlike private schools.