Rural idyll is not too far from the city and sometimes almost inside. A relative of mine told me about Mallaiah and his scenic farm just on the periphery of the city and how the land was under threat as the city greedily expands. 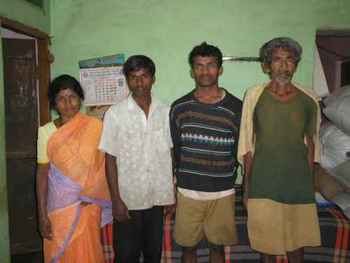 Mallaiah lives in a small village called Gongdipura which comes under Kodigehalli taluk, about 5 kms away from Magadi Road-NICE Road junction in Bangalore city.

I drove on the narrow road leading to Kodigehalli from the Sunkadkatte main road. Small houses on revenue sites and petty shops dotted on either side of the road. We had to take a deviation at one point and get on to a kutcha mud road to reach Mallaiah’s house. We drove past large stretches of barren lands with huge trees here and there.

A huge banyan tree with a little temple under it made us forget that we were just about 4 kms away from bustling Bangalore metropolis. Areca plantations and paddy fields welcomed us.

We reached Mallaiah’s house, about a kilometre and a half from the temple. Bright aster flowers beside his house added colour to the scene. The house was a concrete structure with brick walls and lime plaster; about 600 sq feet, with a hall and kitchen. More rooms were added to the concrete structure over the years as the family needed more space. The mooing of cattle and bleating of goats from the shed announced dusk.

Mallaiah, a thin wiry man, about seventy five years old, welcomed us with his innocent smile. He is originally from the nearby Kannahalli village, about three kilometres away. “My father bought this 10-acre land for just Rs 50 at the rate of Rs 5 per acre, sixty years ago,” explained Mallaiah. He later added another one and a half acres of land. Today, this land can fetch him crores, according to his grandson, Marisiddappa.

Bangalore Development Authority (BDA) sent Mallaiah and his neighbours an acquisition notice two years ago. Mallaiah does not want to give his land up. He is actively participating in the protests held against the notification. He explains, “this holy land, has been feeding us tirelessly for the last sixty years.” He gets quite emotional, “We have no great ambitions and are contented with whatever this mother earth gives us. She never fails us.”

He has two sons and two daughters. Younger son Siddaraju takes care of their ancestral five acres in Kannahalli, while he lives in Gongdipura with elder son Revasiddappa’s family. Mallaiah first married a woman from Nelamangala, who left him within a year, as she could not adjust to his family and lifestyle. He remarried. His wife Ramakka lives with their younger son at Kannahalli, at his ancestral home.

Does his grandson Marisiddappa want an urban lifestyle and the money that the land would fetch? “No, not at all! I too like this peaceful life. There is no pollution. There is no noise. We grow our own fresh food and are healthy. We cannot take the din of a city,” says the young man.

Mallaiah studied up to fourth standard and was in fact very keen on finishing his school when his father handed him the plough. Since that day Mallaiah, started leading a life of a farmer. He and his mother took care of the land while Mallaiah’s father got into raagi and paddy trading business in the Magadi Santhe. But Mallaiah himself has no penchant for business. “I believe in working hard on my land,” says Mallaiah. He did want his sons and grandsons to study. But none of them were keen.

Two grandsons are doing their Pre-University course, while one quit school after 10th standard. One grandson goes out to work at a bus depot on Mysore Road, while another helps out in pumpset servicing in his spare time.

They seem to have no complaints; their life revolves around their land, their animals and their village fairs.

Just as we started talking, it started raining cats and dogs – literally! Dogs, cats and chicken all trotted into the house and made themselves comfortable in their own corners, near the bags of raagi and paddy. The cattle, sheep and goats went into the cowshed for rest.

Right opposite to Mallaiah’s land is a huge patch of land fenced-in by a new owner from the city. Mallaiah recounts that he refused to forego even an inch of his land for making an approach road. Mallaiah himself has given away ten feet of his land all along the border of his land to the Panchayat for making the road, saying, “Should we not do even this much for public good?”

As we were chatting, Mallaiah’s grandson brought fresh tender coconuts for us. I drank the water and glanced around. I saw a single barrel gun in the corner. Mallaiah recounts how he went cycling about 30 kms to the Police Commissioner’s office to get his gun licence. He says he bought the gun for Rs 6250 just for self defence when he was young. Of course in those days, he did hunt a few small animals. Later as strict regulations against hunting came into force, he stopped.

Mallaiah belongs to the Tigalaru community which carries on the tradition of conducting the Karaga festival at the Dharmaraya temple in Pete area in the city.

So far, the family has been able to carry on farming by using the seeds from their own yield. Chemical fertilizers and pesticides are used, though in small quantities. Natural manure made of animal dung and organic wastes is used extensively.

The family does have a television but no cable connection. The signal quality of Doordarshan channels is very poor but Mallaiah feels there is no need for a television. According to him the various channels dished out by cable operators are spoiling the younger generation, who are lured to urban lifestyles and do not want to work hard on their lands.

“I have seen many farmers selling away their lands out of greed for money and ending up working for others in the city. Why would I want to give away my status of feeding others for such a life?” asks Mallaiah. He reminisces of days past, when a sovereign (8 grams) of gold cost Rs 12 and an acre of land cost Rs 5.

The lure of crores of rupees does not seem to move such old-timers. “But we cannot trust the younger generation, who have lost interest in hard work and crave for easy money. We will hold on against the pressure as far as we can. But then, the government is mightier and we may have to let go. Then, we have to go in search of lands farther away, to start our simple lives once again,” says Mallaiah sadly.⊕

The inaugural Namma Bengaluru awards has received almost 4000 nominations. The finalists are due to be announced this month-end. Winners will be announced on December 12th.

Mahadev got tired of driving an auto

After 12 years as an autorickshaw driver, Mahadev quit. Why? What does he think about past career and what about his future?

The real reason BBMP does not pick up calls is its concern for the environment, says the author