Sixty-nine year old A N Vittal, a resident of Kammanahalli in Bangalore East, has frequented the Bangalore Water Supply and Sewerage Board (BWSSB) office several times in the past one year. Despite several phone calls, e-mails and hand-written letters to the concerned officials at the BWSSB including the Chairman and Public Relations Officer (PRO), the water problem in his area persists. “Cauvery water supply through the tap has completely stopped”, he says.

But Assistant Executive Engineer N Malla Reddy has given Vittal and his neighbours a temporary solution to the problem. “He said, if water is not coming, you call me up and I’ll send a tanker”, says Vittal, adding, “Now if we want water we call up Malla Reddy and he sends a tanker. This is supplied to about four to five houses”. 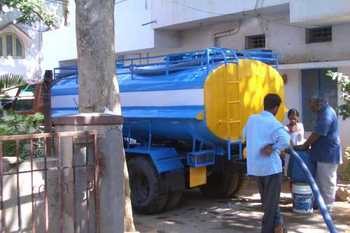 Some of the houses on Nethaji Road cross in Kammanahalli (Bangalore East) depend on tanker water from the BWSSB. Pic: Vaishnavi Vittal

Even as these residents in Kammanahalli’s Nethaji Road Cross face this water problem, for houses just down the street, there seem to be no complaints. The residents have been told that the reason for this is less pressure because some houses are on a higher plain (which requires more pressure) while those on lower terrain do not have a problem.

Speaking to Citizen Matters, BWSSB Chairman P B Ramamurthy seconds ‘pressure’ as the reason for Bangalore East being affected. “Bangalore is not a flat land. We have a rolling topography. Certain areas, houses are on the ridge. Our systems are there, there’s not enough pressure”, he says, adding, “Sometimes it happens in the West also. I get a lot of complaints”.

Ramamurthy explains that it is for this reason that the water board has taken up the Cauvery 4th Stage 2nd Phase project. “Water to East has to come through new pipeline. By end of 2011 this will be ready. We’ll get 500 MLD of water”. He says that now Bangalore North (and East) are at “the fag end of the system”.

The water that is pumped from T K Halli (located about 85 kms from Bengaluru) does not come directly to Bangalore East because of lack of a proper pipeline network. The Cauvery Water Supply Scheme Stage IV Phase II   involves a pipeline network directly to the eastern part of the city. Ramamurthy says that presently there is no water shortage in Bangalore South as this region is closer to the water source and therefore receives water with high pressure.

The pumping station at the High Grounds reservoir pumps water to the Northern and Eastern parts of Bangalore. Pic: Vaishnavi Vittal

Another problem that hits water supply to Bangalore East has to do with electricity. The water board Chief says that when power goes off for even five minutes, it takes an hour to begin pumping water again.

“Bangalore South is a blessed area”

But even as the BWSSB claims that “(Bangalore) South is a blessed area”, in terms of water supply, there are certain pockets where water problems persist for various reasons. Take JP Nagar 6th Phase for example. Col (Retd) C K Seshadri, a resident of the area, says they do not receive water regularly. Col Seshadri has been regularly placing complains with the BWSSB Control Room but in vain. On January 8th, 12th and 14th, he placed complaints with the Control Room and also reported to the local BWSSB office that he did not receive Cauvery water. No water was supplied despite these complaints.

However, on contacting the Assistant Engineer, Kothanur Dinne sub-division, Shambegowda, he says, “There is no problem at all. We are supplying water on alternate days. We supply in the evenings from 6 PM to 10 PM. We supply around 165 litres per person”.

Citizen Matters reported this problem to the BWSSB Chairman who says, “6th phase is an extended area. It’s a new area. We don’t have that kind of water. Tanker water should be sent if water doesn’t come for two to three days. But we can’t send tanker everyday. We can send when there are emergencies. Now that you’ve told me, I’ll call up and discuss”.

Following queries from Citizen Matters, BWSSB Public Relations Officer Prahlad Rao said that he has sought a report from Shambegowda about water supply in the area in the last three months. Rao expects to receive it this week.

On the JP Nagar water problem, BWSSB Minister Katta Subramanya Naidu had earlier said, “We never assured outskirts and newly-added areas, we never assured water supply immediately. You must understand the point that we are not having the water. The water that we are having we are supplying. That’s all. We can’t give more than this”.

Another South Bangalore area, Koramangala, is also reporting water supply problems. Says Sajai Paul, a resident of ST Bed Layout, says, “From what I understand, water from the Koramangala Water Tank was redirected to Vivek Nagar more than a year ago. ST Bed Layout was to be supplied from the HSR Layout Pumping Station”. Paul says that ST Bed Layout and Friends Colony has not been getting regular water supply for more than a year now. She adds that the the BWSSB is supplying water to some houses in the layout by tanker, but not to her residence.

Paul says the matter has been raised with the local MLA Ramalinga Reddy and the BWSSB Assistant Executive Engineer P H Kotekar.  Kotekar says, “ST Bed we are supplying water. If we are not able to, then we send tanker. A pump was proposed, this will be done in another two months time”.

Even as Citizen Matters contacted several local BWSSB engineers to get a clear picture of what is happening on the field, many refused to comment, while others claimed there was no problem at all.

The one engineer who admits to regular complaints is Assistant Executive Engineer, South East Division, B N Ninge Gowda. Gowda is more vocal about the water problems under his jurisdiction. “I get about 20 to 25 complaints a day. Some pertaining to house connections, some to pipelines. We attend to them immediately. If consumers are complaining, it’s generally on the alternate day (the day when water is generally not supposed to be supplied)”. He says that most complaints he receives are from the Johnson market area. Gowda says that he makes sure that he sends tankers when water is not released through the pipes.

A BWSSB reservoir at High Grounds near the Cantonment area. Water is below the surface. Pic: Vaishnavi Vittal

The above areas are but a few that have been afflicted with acute water supply problems. For the North of Bangalore, it is clear that the problem is that of a lack of a proper network of pipes. Important reservoirs like High Grounds and Machalibetta do not have enough water stored in them for the reasons stated above. Going by what the BWSSB Chairman said, it all boils down to 2012 , when the Cauvery Water Supply Scheme Stage IV Phase II  is scheduled to be ready.

Last year, when Citizen Matters spoke to Minister Naidu about the water problem in the city, he too referred to the Cauvery project. But Naidu warned that even this won’t be sufficient since demand will have increased even further by then. ⊕

Authorities have come up with a Rs 40 crore plan to redevelop Cubbon Park under the smart city project. The question is whether it is prudent to splurge on an already-thriving ecosystem rather than redirect scare resources towards creating more such spaces.

IT group’s skyscrapers recommendation to redeem Bengaluru sparks a debate

At a time when unregulated real estate development all over Bangalore has put massive stress on roads, water and other resources, a working group on IT has proposed a skyscraper core with a funding model.