When I heard that Dr Manmohan Singh was coming to Bangalore and would address a citizens’ meeting at Chowdiah memorial hall on 8 May, I was very keen to attend. What other chance would I have to see…or even meet..the prime minister of my country? This man was an academician, a man of learning; and he was one of the leaders I could look up to…a rarity in the present political scenario. Rajeev Gowda, a professor of IIM-Bangalore alerted me to this event first and said that it was going to be a citizens’ meeting with the PM.

This was going to be my first time at a political meeting, and I have normally avoided such engagements. I find many politicians are persons of empty words (and lots of lots of words, too!) and easy promises, interested in getting to power and staying there, rather than in any action on their avowed intention of helping the people.

But the idea of a citizens’ meeting, to be addressed by the Prime Minister, was a novel one, and appealed to me. Here was the PM himself, cutting through the layers that normally insulate top politicos from the mango public (aam janta!), and addressing us…and if it was a citizens’ meeting, surely the problems that our city faces would be debated and discussed. 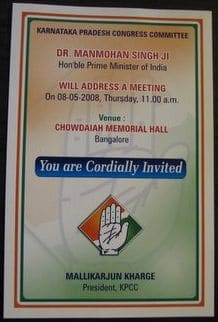 So, in spite of the fact that the requirement of being in my seat by 11am meant a start from home at least 2 hours beforehand, I set off, and with two of my fellow volunteers for Hasiru Usiru, took my invitation from a smiling Rajeev Gowda, and went to the hall.

While waiting, I wrote down the names of the people who were to take the stage, which were clearly written on the backs of the chairs:

Manmohan Singh sat in the middle after he walked in.

I must say, though, that by the usual standards of political meetings, the wait was not bad at all. The PM was scheduled to begin his address at 11.30 pm, and at 12.30 pm he walked in. The President of the Karnataka Pradesh Congress Committee, Mallikarjun Kharge, spoke first. Prithviraj Chavan, the General Secretary, All India Congress Committee then introduced the prime minister. Singh then launched into his address, which lasted about half an hour.

And that is when I got really disappointed. Gowda’s email had talked about this being a meeting of "professionals and intellectuals", and I had presumed that this meant some form of interaction and debate at this august forum where one of the highest leaders was the land would be present. But what the address consisted of was an election campaign in its purest form.

The prime minister talked of how the Congress had achieved a lot at the Centre and how the Karnataka government, or the lack of it, had pulled down Bangalore. Yes, the Bangalore references were frequent and telling, but there was never any sense of involving the audience in any interactive way. The audience, even those who have worked long and hard for the city’s welfare, had to just listen quietly.

As the campaigning and the comparisons between the political parties went on, I found myself hoping that at least at the end of his address, Singh would ask the audience for a few questions on Bangalore and answer them or have a short debate. That did not happen, either. Once he finished, Dharam Singh, the former Chief Minister of Karnataka, delivered a vote of thanks at full volume, which woke many of us from the stupor that the deadpan delivery(of election promises and denunciation of others’ mistakes) had sent us into.

Dharam Singh actually wound up with quite a witty Urdu couplet, the first line of which was, "Na jaaney kin kin ke duaaon mein rehtey ho…" and I could not get the second line, but it went to the effect that the BJP wanted the Congress boat to capsize but the ocean supported the boat….

Polite applause followed each speech, and then, one member of the audience called out from the fourth row to Manmohan Singh, saying, quite loud enough for every politician on stage to hear, "Mr Prime Minister, I have a question..can I ask you?" It was indeed sad to see that the political representatives which the citizens, including the one who asked the question, had elected, not only did not answer the gentleman, but pointedly ignored him as they continued shaking hands and smiling at each other.

It appears no interaction was planned at all. But surely, when a member of the public asks a direct question, he need not be ignored in that cavalier fashion?

The litany of "vote for Congress" being over, the politicos went away, and we were left to file out, too, wondering what we had achieved by spending several hours on a working day to listen to a Congress campaign manifesto.

"We felt cheated," said Kathyayini Chamaraj, of CIVIC. She and fellow-members of the NGO had brought along their charter for Bangalore, thinking that their viewpoints would be expressed…but the audience, like Victorian children, were to be seen and not heard.

I spoke, also, to Anush Shetty, a youngster I know who attended the meeting, and he shared the same sense of being let down. "I feel that since the Election Commission does not allow government office-bearers to campaign using the public machinery, a few days before the election, so the Congress party resorted to this way of letting the leaders on to a public stage to present the party manifesto, with the media resent in full force," he said. A fuller expression of his opinion is at http://anushsh.livejournal.com/104201.html

I spoke to Rajeev Gowda after the event. He too expressed a sense of disappointment. He said that he had organised the event in the understanding that it was going to be a politically neutral and an interactive event…both of which it did not turn out to be. Many people in the audience were there because of Gowda. To them, he represents the educated middle class, a section of society which feels marginalised from the political scene.

However, most of the newspapers saw nothing remarkable in the meeting being a campaign-oriented one, and on Saturday 9 May, they reported Manmohan Singh’s stress on the ills that plagued Bangalore, and his solution being that the citizens should vote the Congress in when they went to the hustings.

When I attend what is called as a ‘citizens’ meeting’, I expect some form of interaction and expression of the citizens’ voices, and not a "vote for us" campaign that says nothing new, and does not address the problems that Bangalore has, in a constructive or practical fashion. ⊕

The second theatre jam is on November 2nd. Artists and participants meet at a farm in Nelamangala around noon.

Large scale changes in voter list: Is the CEO concerned?

The CEO of Karnataka disagreed with allegations that 30% of voter names were removed from the rolls in Basavanagudi. He is right – the deletions were close to 36.36%. He said “over 53,000 names” were added to the rolls – right again! 3,99,299 voters were added.

Kaivara – for believers and trekkers